A Grade I Listed Building in Nymet Rowland, Devon 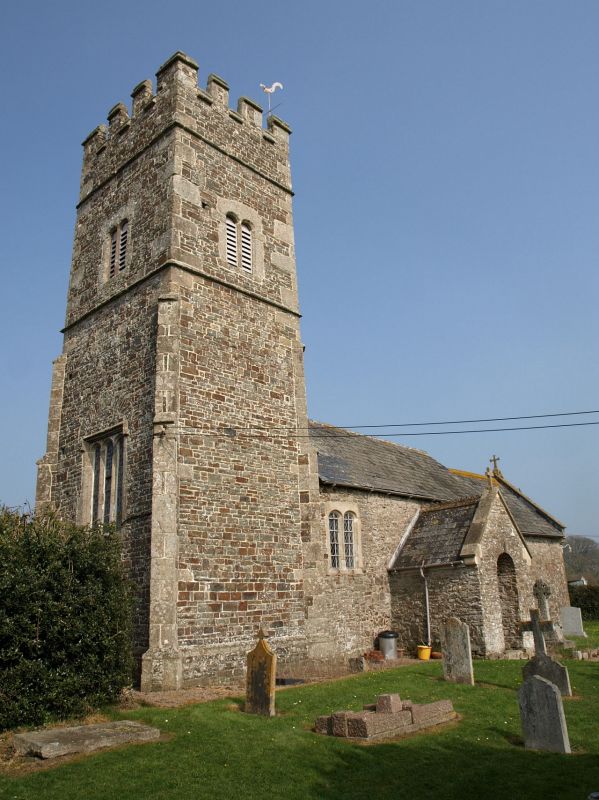 Parish church. C12 origins, late C15-early C16 tower and north aisle, some
improvements associated with a 1636 datestone, restored by Halls of Dolton in 1889.
Tower of roughtly-coursed local mudstone with granite dressings; nave and porch of
random rubble with volcanic and granite detail; chancel (mostly restored) of
snecked mudstone with rusticated Hatherleigh stone quoins and Bathstone detail;
north aisle is rusticated; slate roofs (replacing oak shingles), chancel and porch
with crested ridge tiles.
Nave and lower and narrower chancel, north aisle, west tower and south porch.
Mostly Perpendicular but east window restored in Decorated style.
Late C15-early C16 tower of 2 stages has massive granite quoins, low diagonal
buttresses, internal stair with narrow slit windows on north-west corner and an
embattled parapet. It is surmounted by a plain wrought iron weathercock on the
south-east corner; probably C19. The belfry windows are simple, granite, 2-lights,
each with 3-centred heads. On the west side is an original arched granite doorway
with moulded surround and cushion stops and it now contains a C19 door. Above is a
late C15-early C16 granite square-headed 3-light window with elliptical (almost
round-headed) heads and a moulded hood. On the east side the drip course shows of
an earlier and higher nave roof.
The south side of the nave is C12 but contains later windows, one either side of the
porch. That to the left is 2 lights with elliptical heads and external ferramenta
and is associated with an internal datestone of 1636 although it looks more late
C15-early C16. That to right however could be C7. Built of volcanic it is round-
headed with a hollow-chamfered suround. The porch is late C15-early C16 but heavily
restored. It is gabled with Bathstone kneelers, coping and plain Latin apex cross
and has a plain round-headed outer arch.
The chancel seems a C19 rebuild. The south side contains a single granite lancet,
possibly reset C13 work. The east end has shaped Bathstone kneelers, coping and
Fleuree apex cross and contains a C19 Bathstone 3-light window with Decorated style
tracery and a moulded hood with carved medieval heads as labels. The north side of
the chancel is blind. The north aisle is little restored. The east end contains a
late C15-early C16 granite square-headed 2-light window with elliptical heads and
sunken spandrels. There is a similar 2-light window on the north side built of
volcanic stone with granite replacement mullion and head. To right is a more C15-
looking square-headed 2-light window but heavily restored. It has volcanic stone
sides, granite sill and mullion, and limestone head containing pointed heads with
cinquefoils and sunken spandrels. The west end is blind.
Good interior. The porch roof has a late C15-early C16 barrel-vaulted roof with
moulded purlin under the collars but has been much mended in C19. The south doorway
is Norman. Built of purple-red volcanic stone, it has plain sides (retooled if not
rebuilt in C19) and soffit-chamfered imposts carved with nailhead and spirals which
imitate volutes on the corners. The left side is inscribed EMER. Only a part of
round-headed arch survives, the rest made up of rubble voussoirs. The head is
filled with timber to create an ogee arch and a painted board records a gift of £20
towards the C19 restoration. C19 plank door.
The nave has a C15 or Cl6 common rafter truss barrel-vaulted roof which is now open.
The chancel has a C19 3-bay wagon roof with moulded ribs and large carved bosses.
There is no chancel arch : only a C19 arch-braced truss slightly lower than the
wagon roof. The north aisle has a good late C15-early C16 open 8-bay wagon roof
with moulded ribs and purlins, the original wall plate carved as foliate openwork,
and carved oak bosses, mostly foliate but some Bouchier and Stafford knots. Tall
plain tower arch.
The arcade is unusual being built of oak. Otherwise it has a conventional
appearance. It is 3 bays with one overlapping the chancel. The posts are moulded
(Pevsner's Type A) with plain caps to the shafts only. There are no responds : the
end arches are buried in the walls. The rear arch is propped by a C17 oak turned
post. The only other timber arcade in Devon is at Dowland, near Winkleigh. The
floor is C19 parquet except in the chancel which is C19 tile with a display of
encaustic tile around the altar.
The altar is C19 as is the Bathstone piscina with trefoil head and credence, the oak
altar rail on timber standards, the Gothic style drum pulpit, lectern (these 2 made
by W H Bushell of Down St Mary), stalls and most of the plain deal benches. At the
east end of the north aisle are some late C15 oak bench ends with moulded surrounds
and simple Gothic carved panels. The west end of the nave has contemporary complete
benches with similarly-carved ends. The Beerstone font is a Norman girdled tub.
The girdle is enriched with a band of chevrons and below are incised semicircles
between which are stars and crosses. Upon the bowl are inscribed rude
representations of leaves and fleur-de-lys at irregular intervals; possibly
secondary. To the rear of the north aisle is a good C17 oak chest with carved and
panelled front with a top frieze of scrollwork, arcades with flowers in the panels
and lunettes along the bottom. Alongside stands a C17 oak table with turned legs.
To rear of the north aisle is a painted board containing the arms of George III
dated 1792. C19 wrought-iron sanctuary lamp now hangs from the arcade. 2 plain
marble mural memorials in the chancel, one in memory of William Wreford of
Clearanger (died 1756) and his family up to 1810, the other in memory of Roger
Partridge of London (died 1851). There are fragments of C18 stained glass in the
east window of the north aisle. The east window of the nave includes Art Nouveau
stained glass in memory of Leonard (died 1922) and Eleanor Partridge (died 1926).
Sources: Devon C19 Church Project. Church guide.