A Grade I Listed Building in Silverton, Devon 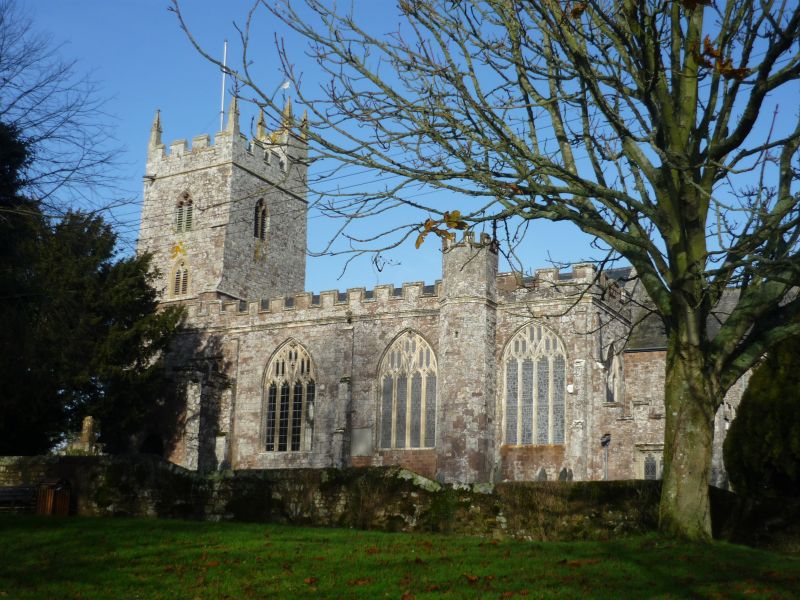 SILVERTON SILVERTON
SS 90 SE
7/262
- Parish Church of St Mary the Virgin
5.4.66
GV
I
Parish church. C15, C16 and C17: north aisle added circa 1478 (its erection
mentioned in the will of John Suffmore, the rector); north chancel chapel early C16
rebus of Lawrence Dobel, (rector 1519-31) carved in 1 of the capitals; the church was
restored and the chancel and the 2 westernmost bays rebuilt, 1860-3, by Edward
Ashworth; restored in 1880, again by Ashworth. Coursed rubble volcanic trap, with
Bath stone.
West tower, nave, north and south aisles, chancel, north chancel chapel, south-east
vestry, south porch.
West tower: 2 stages, battlemented with corner pinnacles, buttresses diagonal to
north-west and south-west clasping to north-east and south-east, all with 3 off-sets.
Polygonal stair turret to north lit by 6 tiny windows, the lower of which is pointed.
2-light belfry opening to all sides, that on the south side with another 2-light
window below to light ringing chamber. 3-light west window, Perpendicular, largely
renewed; west doorway surround appears to be C20, reconstituted stone.
South aisle: 4 bays; the porch occupies the westernmost bay into which it is bonded,
the bay itself recessed a little from the plane of the aisle, with a 4-light square-
headed window above the porch. Conventional Perpendicular west window. It all looks
late C15 or early C16; both the inner and outer doorways, moulded, look right for
this date, along with the barrel vault to the porch, the ribs resting on moulded bell
capitals, unless the peculiarities are a result of Ashworth's modifications. The
other 3 windows of the aisle and the east window, Perpendicular, 4-lights, divided by
slender buttresses with 3 off-sets; polygonal stair turret to former screen, and
aisle roof. Battlemented throughout. Clear masonry Joint between aisle and nave.
Chancel: 2-light window to north and south, 3-light east window, all by Ashworth,
together with the battlemented south-east vestry with 2-light square-headed window to
south, and priest's door to east.
North aisle: 4 bays, as south.
North chancel chapel: clear masonry joint between this and the aisle from which it
projects a little; buttressed, battlemented with cornice moulding bearing fleurons.
Perpendicular east window; C19 window to north.
Interior: nave of 4 bays, tall piers with wavy moulding, all except 2 capitals with
foliage, the exceptions being larger with shield-bearing angels. The 2 west piers
were rebuilt by Ashworth, apparently re-using the detailed stone. Simple chamfered
tower arch; chancel arch with detached shafts large bases and capitals; windows with
nook shafts; wagon roof to nave repaired and renewed by Ashworth, who retained the
odd disjuncture of the ribs above the position of the former screen; open wagon roof
to chancel (all 1860s); flat ribbed roof to north-east chapel; ceiled roofs to
aisles. 1 door to screen (ground floor) survives, that above blocked. Arches into
north east chapel (from aisle and chancel) with panelled soffits and responds, that
to the chancel with detached shafts in addition.
Furnishings: fragment of screen wainscotting now in north east chapel.
West gallery, of 2 builds: 4 Doric columns with pronounced entasis support an ovolo
moulded bressumer; this all looks a century earlier than the frontal, dated 1734,
with 10 panels setting out various parish charities, each pair divided by pilasters,
with moulded rail, and dentilled base.
Stone font, 1834; stone pulpit, 1863.
Glass: east by Ward and Hughes (1880); north aisle (nv) by Warrington, signed (1857).
References: N Pevsner, SD, p263; B Cresswell, Deanery of Cullompton, typescript in
West Country Studies Library; referred to by Bond in Trans.Devonshire Assoc. (1903),
485-6. Devon C19 Churches Project.