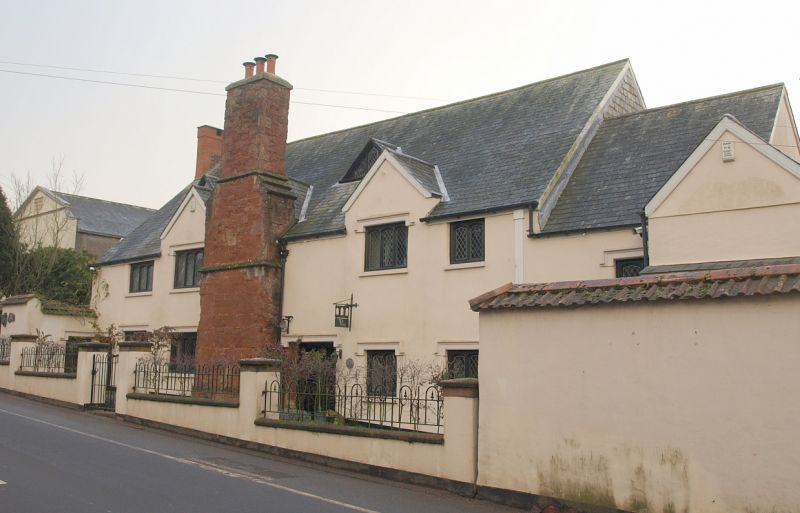 HALBERTON HIGH STREET, Halberton
ST 01 SW
2/197 The Priory
-
24.10.51
- II*
Large detached house; a small assembly or college of Augustinian canons was
established here; it was dissolved in 1539 and the building converted into a
dwelling; the earliest surviving work appears to be late C16, with later
alterations. Mainly cob, plastered,with finely coursed sandstone front lateral
stack; gabled end slate roof. Formerly a 3-room through-passage plan, with the
lower end to the right of the passage; with rear and lower end extensions. The
great front lateral stack with moulded string course and cap, and paired moulded
set-offs, heats the hall; external end stack heats inner room; an external lateral
rear stack with 2 set-offs heats lower end. The lower end extension is heated by an
end stack, but there is evidence for the building having extended further along this
axis. All stacks (except front) with brick shafts. 2-storeys throughout.
Front: 4-window range; a and 4-light window to either side of the stack at first
floor level, each under a hood mould and separate gable in 2 and 3-light windows to
either end; all with C19 timber casements, each light under shallow arch; the 4-
light window has latticed leading. Ground floor with 2-windows of 2-lights, 1 of 3,
and 1 of 4, the 4-light window to hall C16 with triple roll mouldings to stopped
mullions and jambs, and leaf decoration in spandrels, each light under shallow arch.
The other windows are C19 but follow the pattern of the original albeit in a rather
simplified form. All under hood moulds. Wide door to passage, planked and studded,
with chamfered surround. 2 triangular headed 3-light dormers, C19. The lower end
extension has 2-light window to each floor; a projection forward, with slated set-
off, could be the remnants of another front lateral external stack.
Rear: six C19 casement windows; right hand end elevation, slate hung wall, with 2-
light window, C19.
Interior: Inner room: intersecting beams with composite mouldings (cyma recta, ovolo
and roll) forming a grid of 6 ceiling squares, with a deeply chamfered axial beam to
rear; hall with elaborately moulded intersecting beams, composite mouldings carrying
twisted leaf trails, reminiscent of Devon church screen work, and forming a grid of
9 ceiling squares; this motif appears on the cornice; joists with roll moulding, and
butt stops; fireplace with small roll moulding to surround, the mantel shelf
supported by a re-used cyma recta moulded timber.
Plank and muntin screens survive to both sides of the through-passage; bressumers
and muntins chamfered and with carpenter's mitres, the muntins with diagonal stops.
Square headed door surrounds, 1 to hall, 3 to lower end; 2 original doors, with
fleur-de-lis hinges, and 1 with primitive fielded panel. Passage floor flagged. 2
small service rooms lead off passage, both with 1 chamfered beam.
Roof: entirely replaced by a C19 (or later) common rafter roof.