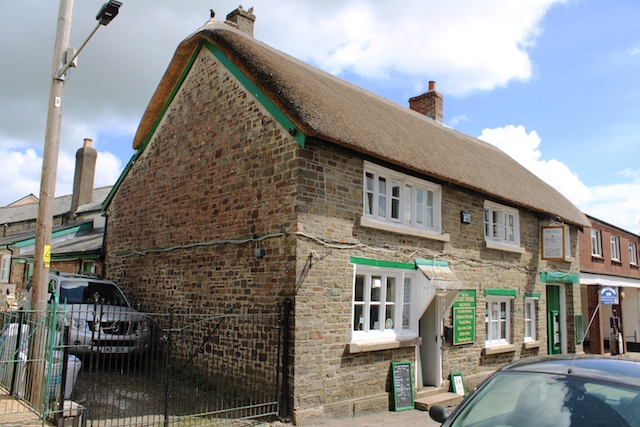 Public house. 1633. Unrendered stone rubble. Thatch roof with gable ends and axial brick stack to front range and rendered rear lateral stack towards left end. Slate roof with 2 rear lateral stacks to rear service range. Plan: Original plan obscured by C19 and C20 alterations and now consists of single large room to front range, the upper storey extending over carriage entrance at right end with a long rear service and former stable range to rear creating overall T-shaped plan.
Development: Roof structure suggests the inn formerly extended further to the left (upper end), the surviving C17 plan therefore appears to consist of a truncated hall at the left (upper) end heated by the rear lateral stack, and lower end, possibly a parlour to right. The boxed in headrail of a screen indicates the former division between the 2 rooms. The original partition of the entry is unclear, the doorway having been cut out of part of a king mullion window clearly the hall window. The inn appears to have been refaced in the C19 and therefore evidence for the principal entrance would have been concealed. Staircase replaced in C19 runs up rear of hall stack in a stair outshut to the left of the rear continuous kitchen and stable wing, the latter having been converted to form part of the dwelling.
Exterior: 2 storeys. 3 window range. C17 fenestration with ovolo-mullions survives intact except for ground floor right-hand window. 6 light king mullion window on each floor at left end, the ground floor window has had the two lights at right end removed and a doorway inserted with 4 panelled door. Two 4-light mullions above 3 light mullion and 4-paned window to right. Ground floor windows have ovolo-moulded timber lintels with run out stops. Wide cart entrance also retains weathered C17 ovolo-moulded lintel, and 2 C19 plank doors.
Interior. Boxed in headrail of screen with 3 ogee doorway heads. Dressed stone jambs to lower end fireplace, lintel replaced. Hall fireplace possibly concealed by C20 grate. Fine plasterwork overmantel depicting Royal Arms of Charles I, dated 1633 and with initials R.A. and A.S. to each side, and trailing leaf and flower decoration to frieze below survives to chamber over hall which was probably originally used as a courtroom but reduced in length when the upper end was demolished.
Roof: 2 C17 trusses to main range with 2 tiers of threaded purlins, threaded ridge purlin and typical C17 dove-tail jointed collars. The truss at the upper end is sited close to the present gable end wall.