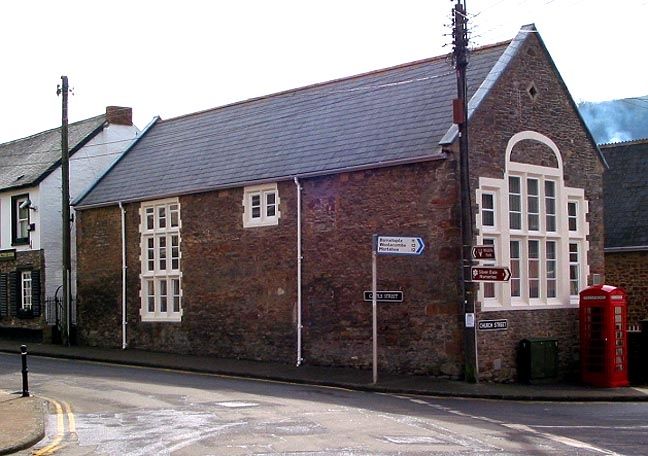 PLAN: an asymmetrical plan consisting of two parallel gable-end ranges with a connecting entrance block between which forms a U-shaped plan. An additional gable end range adjoins the building at the right-hand end and projects forward. Each range contains a single large room.

EXTERIOR: single-storey building, with principal elevation to the west. To the gable ends of the two outer ranges are large tripartite, transomed, mullion windows of three lights with single sidelights. There is a bell to the gable end of the right-hand range. The gable end of the inner range has a three-light transomed mullion window set within a two-centred arch surround with ashlar impost band. The connecting range has an entrance doorway to the left of a five-light transomed mullioned window, both with pointed arch heads, beneath a hipped roof. To the north elevation of the left-hand range is a tall three-light double transomed window and a two-light mullion window which were both inserted in the C19. There are a number of infilled doorways and window openings to the left-hand range and evidence of a roof line of a former attached building, all of which relate to the building’s previous uses.

INTERIOR: no internal inspection (2011), but the main ranges are understood to have arch-braced roofs.

Church houses had close associations with the church, typically being built for the brewing and selling of ales to provide church funds, and also served as the centre for the social activities of the parish. They typically date from the mid-C15 to the early C17 and were most commonly found in the West Country, being particularly prevalent in Devon. Church houses typically had a large first-floor room, approached by an external staircase, with a series of smaller rooms, such as stores and shops, to the ground floor; a plan form that was akin to the first-floor hall house. The church house went into decline following the Reformation, dying out as a building type in the early C17 when church ales stopped being produced.

The will of Richard Harding, dated 1640, provided money for the conversion of the church house in Combe Martin to an almshouse, implying that the building’s original function as a church house had ceased by this point. This is understood to be the earliest documented reference to the church house.

From 1662-1800 it was used a poorhouse, and from 1800-1834 as a workhouse. In 1834 it became an endowed free school, becoming a national school in 1856 until the local education authority took control of the building in 1906. From 1969 to the present day the former church house has been a community centre.

An historic photograph of 1882 depicts a gabled porch and bell-turret to the west gable of The Community Centre. Both have since been removed. The photograph also shows the additional wing to the south forming new school rooms. This extension is depicted on the first edition Ordnance Survey (OS) map published in 1889. The current OS map shows that the building has been further extended to the south-west and that the footprint of the original building has been quadrupled.

The Community Centre in Combe Martin is designated at Grade II for the following principal reasons:
* Historic interest: for its pre-1640 origins as a church house and its subsequent uses as an almshouse, workhouse, poorhouse and school;
* Architectural interest: for the external architectural detailing, introduced when it was converted to a school in the mid-C19;
* Group value: for the visual and functional relationship between the former church house and the C13 Church of St Peter Ad Vincula (Grade I).