A Grade I Listed Building in Shirwell, Devon 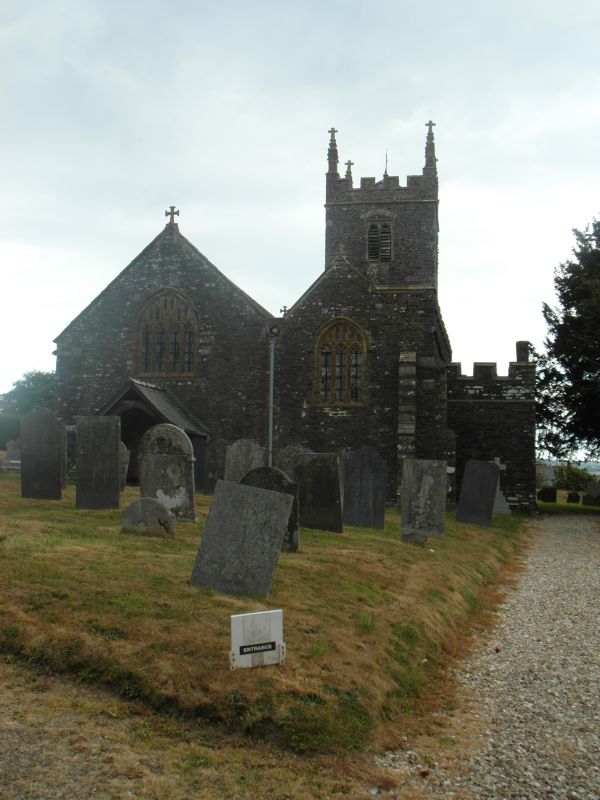 Parish Church, largely C13 fabric to nave, chancel and bottom stage of tower.
Mostly C15 south aisle and north transept, and top stages of tower. Embattled
parapet to tower, south aisle and porch when 'This church was beautified in ye year
of Our Lord 1704' according to an inscription over south porch. The entire church
heavily restored 1880s in Perpendicular style by William White including most of
the fenestration and a vestry. Coursed shale rubble with freestone dressings,
windows of Hamhill stone and slate roof. The tower, capped by 4 pinnacles with
crosses added in C19, is situated at east end of south aisle with tower arches of
low pointed unmoulded arches into nave and south aisle. It has four 2-light bell-
openings with trefoiled cusping and flat hood-moulds. C13 Lancet window to east.
Large slate sundial dated 1756 and damaged armorial shield over C15 south porch
with transverse hollow chamfered beam supporting porch roof. C13 doorway with
pyramid stops surrounds an old door complete with lock. C13 west doorway has
chamfered 2-centred arch over early door and late C19 porch with some reused roof
timbers and to 1 side, a reused moulded and crenellated wall-plate. The vestry has
a corbelled stone smoke vent. Interior: 3 bay south nave arcade has B-type
(Pevsner) piers, vine leaf decoration in capital of pier at west end, fern leaf in
other 3. The 2 end capitals have moulded heads, the central ones blank shields in
foliage. Late C19 unceiled waggon roof to nave, south aisle and chancel, although
the 2 latter'may incorporate some earlier timber and have moulded ribs with carved
bosses and moulded ribs, carved leaves in the angles of the intersections of the
ribs, and carved fleurons in the wall-plate. C19 north transept arch supported on
west side by a massive C15 timber pier with 4 shafts of rough wave moulding between
and fleurons in the capitals. West of it a small projection in the angle of the
transept and nave possibly created a hagioscope to the north transept chapel.
Simple unmoulded pointed chancel arch. Badly mutilated piscina with cusped, arch
shelf and carved head in scalloped drain. Unrestored but slightly damaged
recumbent effigy of an unknown lady in C15 dress in a low recess in the north
chancel wall with quatrefoil decoration in base. Above and towards east end a
wall monument erected by Christopher Boyce (died 1744) - central medallion below
emblazoned shield with floriate surround, cherubs and linen folds. Painted
decoration. Above effigy a white-framed marble monument with grey background to
Lady Anne Chichester (died 1723). 3 wall monuments on north wall of nave, George
Lugg (died 1650) - a plaque within ionic collonettes and broken scrolled pediment
above, painted unrestored medallion below; Frances Lugg (died 1712), marble bust
over Corinthian surround; Grace Lancey (died 1683), pink marble with medallion and
skulls above. In south aisle to west of porch a wall monument to Anne wife of
George Newbold (died 1860), and George Newbold (died 1821) signed J Hughes,
Barnstaple. C12 Font with square bowl on round stem and supporting pillars with
four flat blank arches to each side of the top. East window by Kempe 1898 and
other fenestration by W White of uncoloured glass in rectangular and diamond
pattern.