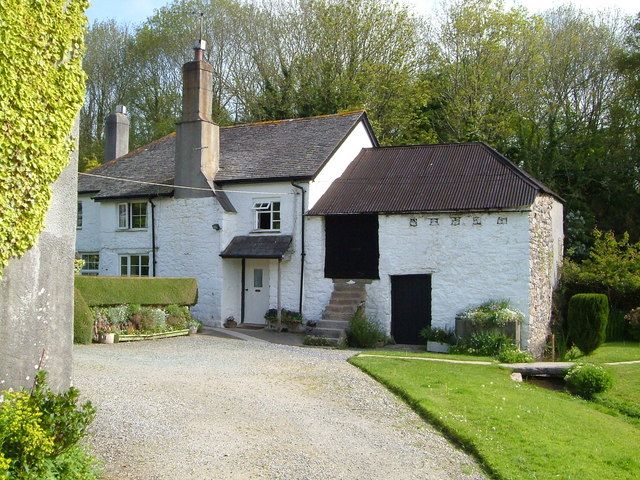 Farmhouse and adjoining outbuilding. Circa early C17, or earlier origin,
altered and extended in circa early C19. Stone rubble walls mainly granite,
with whitewashed front. Dry slate roof with hipped higher end to left and
gabled to right; the outbuilding at the lower right hand end has a lower level
corrugated iron roof with a half hipped end. Rendered shafts to the stacks;
projecting stack at the higher left hand end and a lateral stack with large
set off incorporated into the hall bay at the front of the hall.
Plan: 3-room and through passage plan; the lower end to the right is an
outbuilding but may have formerly been a kitchen open to the roof with a
fireplace backing onto the passage. The hall to the left of the passage has
a lateral stack at the front with an integral projecting hall bay to its left
and a newel stair in a rectangular projecting turret at the back of the hall.
The inner room to the left is heated from a gable end stack. In circa early
C19 an unheated outshut was built behind the inner room and hall. The lower
end may have originally been a shippon and converted into a kitchen later and
eventually floored and used as an outbuilding again. There is a small stream
flowing past the lower end wall of the outbuilding.
Exterior: 2 storeys. Asymmetrical 3-window range plus the outbuilding to the
right. C19 plank door to the passage to right of centre with a large lateral
stack projecting to its left incorporating a 2 storey hall bay which has a C19
3-light casement on the ground floor with a large timber lintel and a 2-light
casement on the first floor, both with glazing bars. To the left of the hall
bay a C19 12-pane sash lighting the inner room and 2-light casement above.
The passage doorway has a corrugated iron canopy on timber cantilevers and a
late C20 casement above. To the right the outbuilding has a lower roof and
a narrow flight of stone steps up to a wide loft doorway and a ground floor
doorway to the right with a row of pigeon holes above; both doorways have old
plank doors and timber lintels. On the lower end wall of the outbuilding a
small blocked ventilation hole on the ground floor with a patch of rendered
wall above which is probably a repair; pigeon holes under the eaves on the end
wall.
Rear elevation: Main roof is carried down over the rectangular stair turret
at the centre, its eaves have been raised in concrete blocks. Passage doorway
to the left of the turret; the doorway has been made narrower and has a plank
door, and a C19 2-light casement above. The outshut to the right of the stair
turret has rendered walls and a lean-to slate roof with a Cl9 2-light casement
above on the first floor. The outbuilding to the left has one 2-light
casement on the ground floor and a brick chimney shaft over the rear wall.
Interior: The hall has square section joists and a chamfered cross beam with
bar stops and a chamfered beam over the hall/passage partition which is
boarded probably concealing stud work. Solid wall at the higher end of the
hall; not known whether this partition wall rises above first floor level.
The hall has a bench at the higher end which continues into the hall bay at
the front and has a boarded back. The lateral hall stack has a chamfered
timber lintel and monolithic granite jambs, but no oven. Timber newel stairs
in the turret at the back of the hall. The inner room has a fireplace with
a replaced timber lintel, and the ceiling has also been replaced. Much of the
C19 joinery survives including plank doors.
The outbuilding at the lower end has chamfered cross beams and a large
fireplace against the passage partition with a heavy timber lintel above the
floor level, therefore the floor much have been inserted later.
Roof: Only one truss over the higher end was seen and this has straight feet;
the roof space was not inspected. The roof over the lower end has been
replaced in circa early C19.