A Grade I Listed Building in West Alvington, Devon 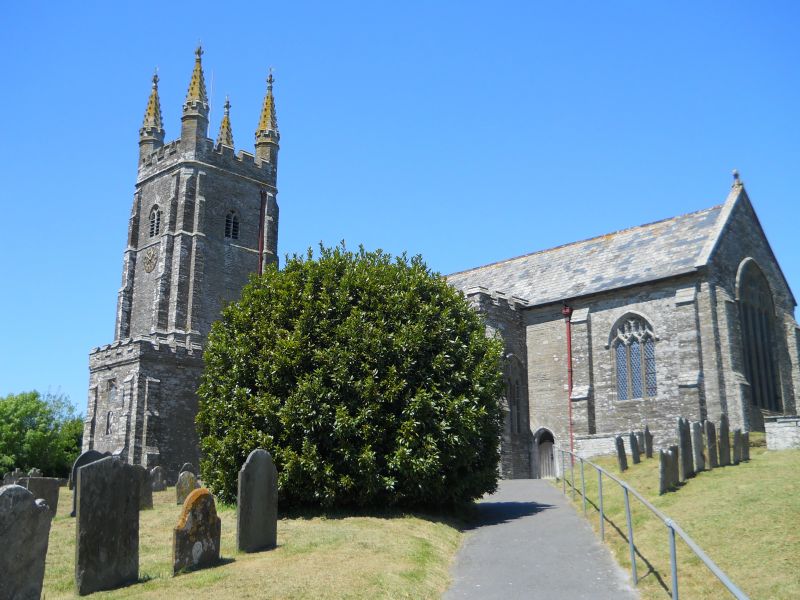 Parish church. C13 origins remodelled in C15, restored in 1866-7. Roughly
coursed slate stone rubble walls. Gable ended slate roof to nave and chancel.
Plan: some C13 fabric preserved in chancel judging from piscina but the nave,
narrow north and south aisles, tower and porch date largely from the C15. The
south chapel housed the Ilbert family pew (q.v. Bowringsleigh). A C19 vestry
projects to the north of the chancel and the C19 restoration included the roofs
and screen and reseating.
Exterior: West tower is of 3 stages with crenellated parapet and crocketted
pinnacles. Set-back buttresses. 2-light cinquefoiled belfry lights probably
restored. C15 2-centred arched west doorway with roll and hollow moulding.
Perpendicular window above. North aisle has stone parapet with moulded cornice
and is 6 bays long with buttresses between the windows and a 5-sided stair
projection between chapel and aisle. Large 4-light Perpendicular windows, some
retaining original tracery, others restored. Gabled vestry projects from chancel.
East window is early C20 in Perpendicular style. 3-light window on south side of
chancel retains its probably C15 tracery. Small priest's door with 2-centred
head. Windows to south aisle are late Perpendicular in character but probably
restored, they have buttresses in between. Both the south aisle and the 2
storeyed porch are crenellated. Large roundheaded roll and hollow moulded doorway has an image niche above containing the figures of a bishop and a swan. Single light window above.
Interior: porch has C20 flat beamed ceiling. Stone seats either side and image
niche in left-hand wall. Beyond it is a small doorway with shouldered head to
room above. Large south doorway has 4-centred head with roll and hollow moulding.
The internal walls of the church have had their plaster stripped. Two identical 6 bay arcades of Beerstone with Pevsner A-type piers which have carved capitals, and 4-centred arches. At the east end of each arcade is a 5-sided rubble pier set against the well, 4-centred tower arch with double-chamfered head and projecting imposts. C15 rood screen heavily restored and with its sections to the aisles missing the coving and cornice, but retaining traces of original colour. The wagon roof over the nave, if not completely renewed, is at least heavily restored and the same applies to the flat timber roofs of the aisles. In the chancel is a C13 trefoil-headed piscina and aumbry with chamfered arch over. Good C15 chest tomb of Purbeck marble set into north well of chancel with decorated canopy above and outlines of removed brasses at the back.. It may be to a member of the Bowering family. Also good wall memorial on north well to William Bastard, who died 1700. A marble plaque has cherubs heads above and below and high relief foliage and fruit down either side flanked by Corinthian columns with broken pediment and heraldic shield above. Late medieval octagonal font with carved panels to bowl.

Sources: White's Directory of Devon 1878
Beatrix Cresswell's Churches in the Deanery of Woodleigh