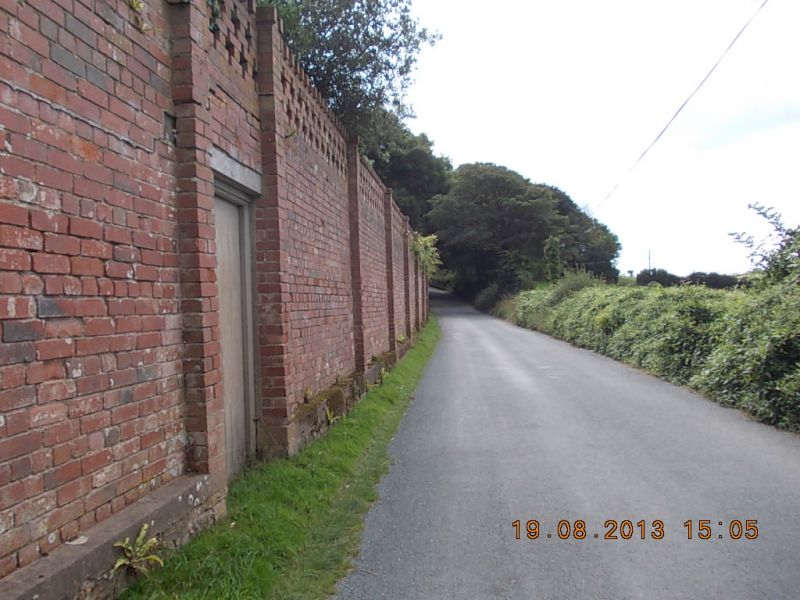 Country House. 1720 - 40 with earlier rear wing. Stucco stone walls to front
range, plastered rubble to rear wing. Double hipped slate roof to front, gable
ended to rear wing. 2 brick axial stacks to front and 3 brick stacks to rear
wing.
Plan: the principal front range consists of 2 rooms of differing depths at the
front either side of a central passage which leads to a stairhall at the rear.
Smaller room behind the left-hand room. At the rear of the right-hand one is
another large room, probably the dining-room, extending partly into the rear
wing, which continues to incorporate kitchen and service rooms. This wing has few
early features but probably dates to the Cl?. Smaller C19 wings built against the
side of it on inner face.
Exterior: 3 storeys with basement. Symmetrical 5-window front of early C19
hornless sashes of 12 panes. 3 hipped dormer windows. C20 double glazed doors at
centre under original shell hood. Deep coved plaster cornice below sprocketted
eaves. Right-hand elevation of C18 block has similar windows apart from a large
marginal paned early C19 sash on ground floor to right. Lower rear wing has early
and late C19 sashes and late C19 or early C20 casements. Rear of C18 block has a
tall roundheaded stair window with intersecting glazing bars. To the right of the
house a section of garden wall extends a short distance and terminates in stone
gate piers with ball finials.
Interior: the 2 front rooms have C18 chimneypieces of classical design with
simple carved low relief decoration. The left-hand room has an egg and dart
cornice, 6-panelled door and panelled shutters. The right-hand room has a simple
plaster frieze. On the hall side both doorways to front rooms have shouldered
doorcases. Original open-well staircase with cut string, decorated tread ends,
wreathed handrail and turned balusters. Shallow arch between front and rear parts
of hall. Dining room partly in rear wing, also has an C18 chimneypiece and a
decorative plaster cornice with acanthus leaf ceiling rose. On the lst floor the
2 front rooms also retain their chimneypieces and have C18 2-panelled doors and
simple moulded cornices. The attic rooms have 2-panel doors but there are also 2
C17 panelled doors.
This house is a good example of its period with a very unspoilt exterior and
preserving a number of C18 features inside.