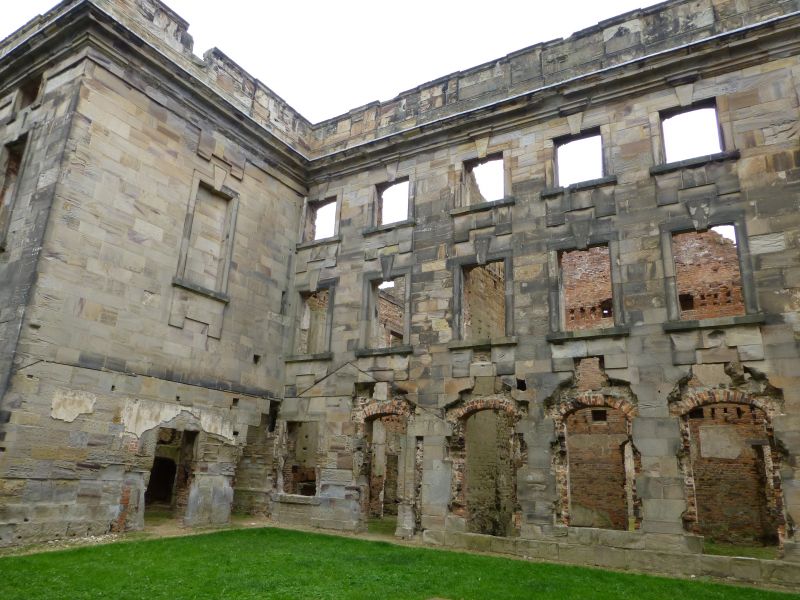 Country house. 1724 by Francis Smith of Warwick for Nicholas, Earl of Scarsdale.
Coursed sandstone and brick faced with sandstone ashlar. A ruin but the outer walls
remain virtually intact and much of the inner walls survive. Two storeys. Nine
bay east and north elevations. West elevation with two four-bay projecting wings
and deeply recessed centre portion. South elevation of eleven bays built up close
to the church, the centre seven bays recessed. The main front is the sumptuous nine
bay east elevation with banded rustication, entablature with modillion cornice and
parapet. Centre three bays beneath a pediment with armorial achievement, on four
Corinthian half columns. Two further bays on each side with giant Corinthian
pilasters. One bay angle pavilion with coupled pilasters and doorcases with
segmental pediments on brackets and windows above with moulded surrounds. Plainer
north front, the centre three bays advanced. Giant Corinthian pilasters between
each bay and windows with moulded surrounds. Central doorway with Gibbs Surround
and pediment. West front is similar but with pilasters at the angles only and
instead of a complete entablature, a modillion cornice with plain aprons below. In
the front hall, on the north front, are fragmentary remains of C18 plasterwork by
Artari and Varsalli. Some of the interior walls of coursed sandstone may be
remains of the C17 house that stood on the site. Extensive brick vaulted cellars.
The interior was dismantled in c1920 and some of the rooms are preserved in the
Philadelphia Museum in America. J Carnforth The Uncertain Future of Sutton Scarsdale
Country Life, v147, pp850-851. M Jourdain Sutton Scarsdale: The Seat of Mr William
Arkwright, County Life, v45, pp166-173.The Hall is also a Scheduled Ancient
Monument.