The Ruins of South Wingfield Manor House, Incorporating Manor Farmhouse and an Aisled Outbuilding to the South

A Grade I Listed Building in South Wingfield, Derbyshire 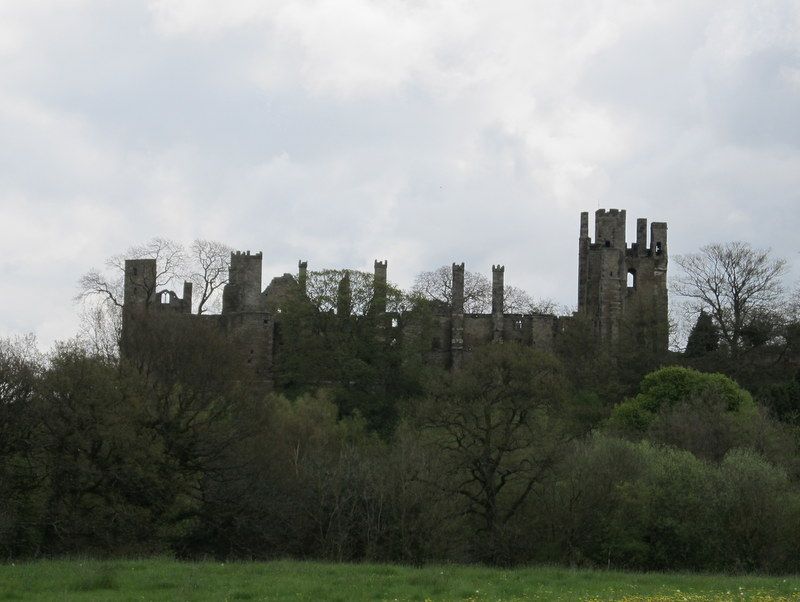 Entry Name: The Ruins of South Wingfield Manor House, Incorporating Manor Farmhouse and an Aisled Outbuilding to the South

Fortified medieval manor house, Built 1439-53, by Ralph, Lord Cromwell, who was Lord
Treasurer between 1433 and 1443. Massive ashlar and rubble gritstone, with some
tiled roofs. Double courtyard plan, with outer entrance gateways to south east
corner of the south courtyard, and offices and quarters for the household in the
south, east and west ranges. To the north, a cross range dividing inner and outer
courtyards, with central gateway flanked by superior lodgings with hearths. The
inner courtyard had further guest lodgings with hearths and garderobes in the west
range, which included the 72ft high tower at the south end. The north range
comprised a kitchen court at the west end, with kitchens and service rooms, below
private apartments and a great chamber. From the kitchens, a passage led to the
screens passage of the Great Hall, with its gabled entrance porch, oriel window at
the dais end, and a vaulted undercroft. If built, the east range and a parlour to
the Great Hall no longer survive. Save for the under croft, the site is ruinous, but a
roofed structure survives in each courtyard. North courtyard, south side: a farmhouse,
east of the inner gateway, mid C18, with stone slated and pantiled roofs. South
elevation with two massive projecting stacks, formerly serving the lodgings, one
with C19 diagonal ashlar chimney, the second to the east smaller, and with a C19
plain cap. Generally with C20 windows, in old surrounds, one with a flush mullion to
the east end. C20 infill between entrance tower and projecting stack to west below
windows with chamfered and quoined surrounds. Continuous plinth, matching range to
west of gateway. Gabled single storey porch, uncoped, with four centred arched head
to entrance doorway, and C20 glazed door. Long stone slated catslide roof to rear
elevation, incorporating traceried 2-light window. Attached three storeyed wing to east
end with gable stack, and pantiled roof with stone slated eaves. South range, east
end: aisled outbuilding thought to be the earliest building in the complex, providing
workspace and accommodation for labourers. Coursed rubble gritstone, with ashlar
dressings, coped east gable and a stone slated roof. Two storeys, five bays, with
four centred arched doorway with quoined surround to the centre bay, the bays
delineated by shallow stepped buttresses. Two 2-light chamfer mullioned windows, one
to each floor. Two smaller openings, and the west bay rebuilt, with a quoined and
chamfered surround to a first floor opening above a slit window. Interior: aisle
arcades support a double purlin roof, the aisle post standing on 1 metre high stone
paids, and with jowels to north and south faces to carry transverse floor beams
and spurs to walls. Diminutive curved braces to transverse beams and tie beams.
Arcade plates braced longitudinally with massive curved braces. Through purlins
have curved wind braces, and support collar and tie beam trusses, rising from
arcade plate. Coupled rafter roof. At the east end, hearths which are related to
those in the adjoining gatehouse. In front of this, a shallow single bay floor
with short posts and wall posts which are angle braced. History: after Cromwell's
death, the manor was sold to the Earl of Shrewsbury and remained in the ownership
of that family, during which time, Mary Queen of Scots was imprisoned there. After
the Restoration the astronomer, Immanuel Halton created a new house in the shell of
the Great Hall. Scheduled Ancient Monument now in Guardianship. A Emery and M Binney,
'Wingfield Manor, Derbyshire, I & II'. Country Life 1982.