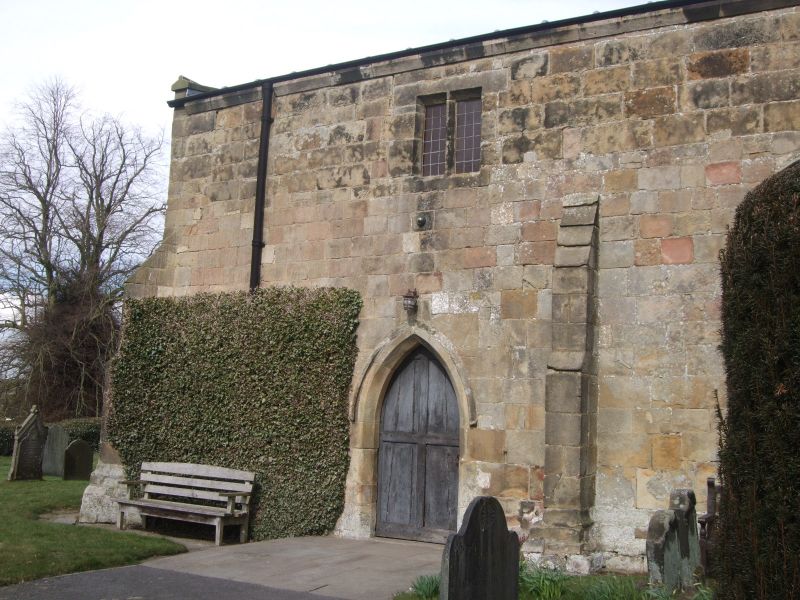 Church. Late C14 and earlier. Restored C19. Coursed squared sandstone
and ashlar. Low pitched lead roof with stone coped gables. Nave and lower
chancel in one. South elevation of four bays, divided by buttresses with two
set-offs, Western bay with a single chamfered EE doorway with hoodmould. C19
four panelled door. In each of the three other bays, a 2-light C14 window of
two cusped lancets with a quatrefoil above, the bottom of which is drawn down
into an ogee. Hoodmoulds with headstops. All much restored in C19. In the
third bay from the west, also a low, blocked, priests doorway with depressed
round arch and hoodmould. The buttress to the right was heightened in C19
(blocking a 2-light clerestory window) and is capped by a polygonal chimney. To
the nave, a C17 clerestory with two plain 2-light chamfered mullion windows.
East window of c1300 with intersecting tracery of 3-lights. Hoodmould with
headstops. The tracery much renewed in C19. North elevation, east to west.
Angle buttress, a 2-light window as on the south side, buttress, another similar
windows to the nave, a blocked square window with chamfered surround, above
the stump of a buttress, another similar 2-light window and a half blocked EE
doorway matching that on the south side, with a clerestory window above, as on
the south side. The west window is a replacement of 1901, matching the east
window, but of greater height. Bell fixed to the west wall. Restorations in
1836, 1843, chancel re-roofed in 1856, nave roof repaired in 1894 and restoration
in 1901 by Hunter & Woodhouse of Belper. Interior - C19 pews with ogee traceried
ends, brought from St Alkmunds, Derby in 1967. Matching pulpit. Either side of
the east window, two large head corbels, early C14. Wall monuments - to the right
of the east window, to Emma Harriet Scambella 1821, Signed Watson Feet, an
obelisk back plate with marble pedestal and draped urn. To the left of the
east window, to William Tyson, died 1843, and Lucia his wife, died 1848. Slate
back plate with marble sarcophagus and coat of arms above. Signed M W Johnson,
New Road, London. South wall - memorial to Thomas Archer, Commander in the
Royal Navy, died 1853. By M W Johnson. A scroll over an anchor. Another to
Mary, widow of Thomas Archer, died 1865. Marble sarcophagus on a slate back
plate. By Patterson of Manchester. Brass wall plate to William Tomkinson,
died 1901, and his wife, Mary, died 1900. By Jones & Willis Ltd. Also on the
south wall an C18 painted hatchment. One stained glass window, chancel south,
date of death 1901. Font, a circular bowl with bold trefoil motif and fleur de lys
between, on a base of clustered filleted shafts.