A Grade I Listed Building in Brailsford, Derbyshire 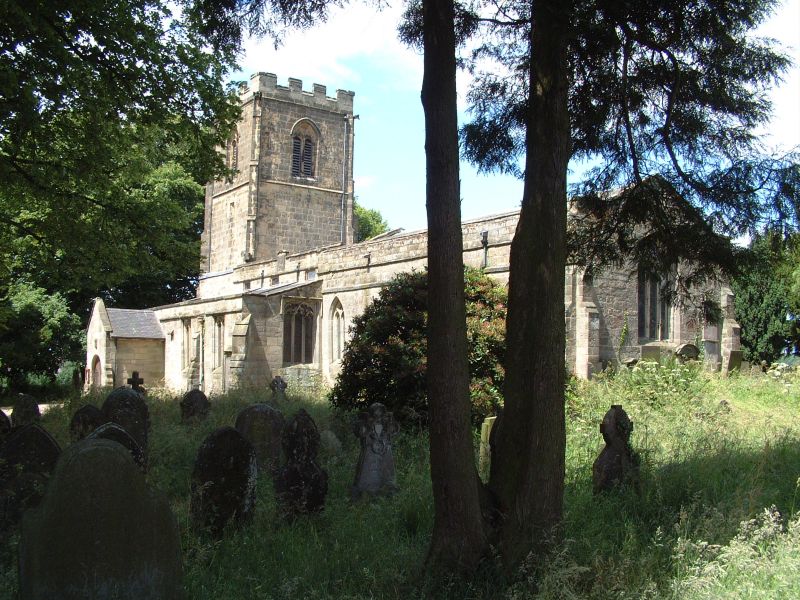 PARISH OF BRAILSFORD
CHURCH LANE
Church of All Saints

Tower of two unequal stages, divided by a string course. Diagonal buttresses with five set-offs. Battlemented parapet. Projecting staircase wall to north. West door with Perpendicular mouldings, flanked by C18 war memorials.Three-light window above with plain arched lights and Perpendicular tracery. Small square opening above, repeated on north and south sides. Two-light bell openings to each face with arched lights beneath Y-tracery. South side of tower embraced by south aisle which has a two-light west window under a flat head, with cusped lights and mouchettes.

Gabled south porch with broad chamfered round arch with a stone above inscribed WM 1629. Sundial above. To the right are two two-light windows with flat-heads and C19 Decorated style tracery, but genuine C14 mullions. Buttress with two set-offs and similar diagonal buttresses at the angles. String course and plain parapet. Three-light east window with Decorated tracery with cusped mouchettes. Three rectangular clerestory windows and a string and plain parapet above with a sundial. The south side of the chancel has three two-light windows with C19 tracery of two lancet lights with a quatrefoil above. Priests doorway between the first two windows from the west. Two string courses above and a plain parapet. The east wall has angle buttresses and a three-light window with early C14 tracery.

The north side of the chancel has a C19 lean-to vestry with simple pointed arched doorway to the east and a paired lancet window to the north. To the right, a two-light window similar to those on the south side, but possibly with genuine early C14 tracery. The north side of the nave has two buttresses and two two-light windows with flat heads and cusped lights. Doorway to the right with wave moulding.

INTERIOR: has a four bay south arcade, the fourth bay now against the side of the tower, showing that the tower was built within the Norman nave. The west pier is circular with a scalloped capital, the next circular with octagonal capital, the third has an octagonal pier and capital, and at the east end there is a semicircular respond with polygonal capital. The round arches have a step and a chamfer. Double-chamfered tower arch. Early C14 chancel arch, supported to the north on a free standing circular C12 pier with many scalloped capital. Early C14 triple sedilia and piscina with deep fluted drain, in the south wall of the chancel.

The reredos has re-set linenfold panels and flamboyant tracery panels. C17 communion table and C17 or earlier oak chest. Tomb recess in the chancel north wall with an incorrectly assembled monument set in. C19 tiled chancel floor. Carved rood beam and cross of 1934. Deeply carved bench ends in the nave, one dated 1884. In the south aisle are an C18 charity board, four boards with religious texts and a royal coat of arms. Octagonal font, probably C16.