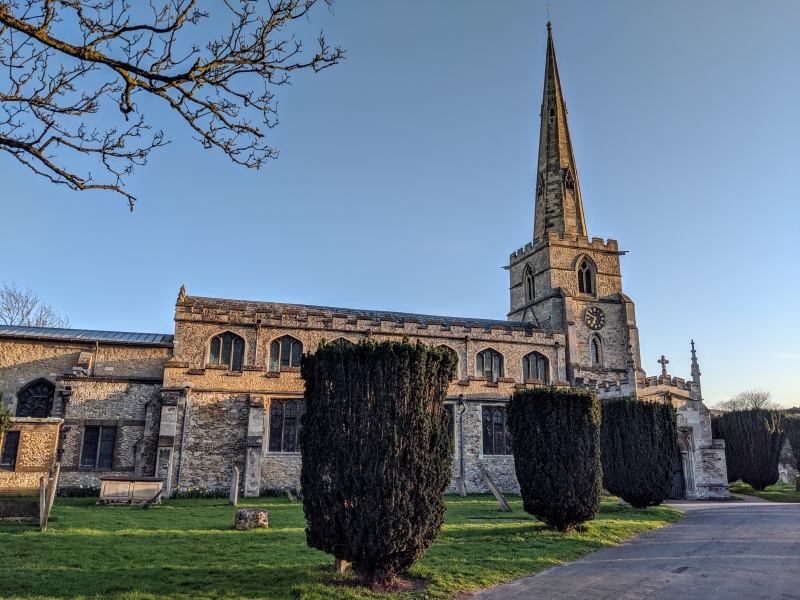 The Church of St Andrew, Chesterton, lies on the north-west side of Church Street, Chesterton. The original church was C13, but the present church is principally C14 and C15, with C19 alterations.

'Should simple village rhymes attract thine eye, / Stranger, as thoughtfully thou passest by, / know that there lies beside this humble stone / A child of colour haply not thine own. / Her father born of Afric's sun-burnt race, / Torn from his native fields, ah foul disgrace; / Through various toils, at length to Britain came / Espous'd, so Heaven ordain'd, an English dame, / And followed Christ: their hope two infants dear. / But one, a hapless Orphan, slumbers here. / To bury her the village children came, / And dropp'd choice flowers, and lisp'd her early fame: / And some that loved her most, as if unblest, / Bedew'd with tears the white wreath on their breast: / But she is gone and dwells in that abode / Where some of every clime shall joy in God.'

INTERIOR: Aisled nave with C14 arcades of seven bays, with octagonal piers. Towards east end of north aisle, ogival-arched tomb recess; towards east end of south aisle, double piscina. At east end of south aisle, chapel dedicated to those who died in 1914-18 war. Clerestory C15. Roof supported by stone corbels, largely C19. Chancel C15, but much reconstructed in 1842-4; windows completely restored. In south wall of chancel, sedilia with small ribbed vaults within the canopies. C15 angel corbels in chancel. Floor of chancel with polychromatic tiles. C15 painted Doom over chancel arch, extending into east bays of clerestory: much detail remaining, as well as portions of later painting, including, to left and right of arch, a rose and thistle. In the west tower a door to C15 staircase, the staircase itself corbelled out on a lion bracket. Organ of 1860 to north of chancel. Stained glass: east window 1897; other glass of 1803, 1872, 1873, 1875, and 1884. Monuments: in chancel, a pair of black and white marble wall tablets in the form of chest tombs, to William and Anne Wiles, (d 1849 and 1827), made by A. Swinton of Cambridge. In south aisle, wall tablet with urn and weeping willow, to Diana Elizabeth and Sir Broderick Chinnery, 1840; a stone in nave marks their vault. In north aisle, four plain C19 wall tablets to Wragg family. Carved benches, most with poppyhead ends, two with standing figures; some C15, some copies. Early C17 oak pulpit. Plain C13 font.

The church has group value with the churchyard and its wall which are listed, as is the Old Manor House which overlooks it to south. The listed vicarage of c1820 (q.v.) lies at a short distance to east; Chesterton Tower (q.v.), a listed mid-C14 domestic building, is a little further east.

HISTORY: The church at Chesterton is first recorded c.1200. In 1217 the church and living were presented to the papal legate, Cardinal Guala, by Henry III, in gratitude for Guala's efforts at reconciliation during England's domestic unrest at the end of the reign of King John. Cardinal Guala in his turn presented the church and living to the Abbey of Sant'Andrea which he himself had founded in his home town of Vercelli, near Milan. The Italian abbey thus became rector of the parish of Chesterton, and held the benefice for over 200 years; Guala also appointed an English vicar. In 1273 it was directed that 'all priests celebrating in the church are to obey the abbot's procurator and also the vicar, who has the governance of the church on account of the English tongue, and they are to do principal reverence to the procurator and secondary reverence to the vicar.' A vicarage was ordained in the 1273 to the south of the church; a vicarage of c1820 lies to the east of the church, though it is no longer inhabited by the vicar. In the mid C14 a house was built near the church, thought to have been for the procurator. This building, known as Chesterton Tower, remains and is listed at Grade I; it is a rare example of a house built for a foreign appropriator. Until recently it stood in the grounds of the vicarage, but now stands at the centre of a small housing estate, Chesterton Towers.

In 1436 Henry VI seized the advowson of Chesterton from the Abbey of Vercelli and gave it to King's Hall, Cambridge. King's Hall became Trinity College, which is the church's patron today; many of the vicars of Chesterton have been fellows of Trinity.

The church has a special link with the abolition of the slave trade in England; on the north wall is a plaque commemorating Anna Maria Vassa, daughter of Olaudah Equiano, a former slave and one of England's most effective campaigners for abolition. The plaque tells us that she was interred 'near this place', but she does not appear in the church's burial records. According to baptismal records, Anna Maria (Ann Mary) was three years old when she died, though the plaque says that she was four.

Gustavus Vassa was the name given to Anna Maria's father when he was a slave; Olaudah Equiano was the name under which he chose to publish his autobiography, upon which much of our knowledge of his life depends. Olaudah Equiano's was the pre-eminent black voice of British abolition. As a slave, working mainly on board ship, he learned to read and write, and at the age of about twenty he managed to buy his freedom. He settled in England, where he built a life for himself, working at first as a servant. He also participated in an abortive venture to establish a plantation on the Mosquito Coast; his role included selecting the necessary slaves. Appointed commissary for a project to resettle former slaves in Sierra Leone, he suspected corruption in the administration and resigned. Equiano joined the anti-slavery campaign, writing to Queen Charlotte 'on behalf of my African brethren' in 1788, and became associated with leading abolitionist figures - Granville Sharp, Thomas Clarkson, and William Wilberforce. In 1789 he published his autobiography, The Interesting Narrative of the Life of Olaudah Equiano. The first account of the realities of slavery by one who had experienced them, the book was a huge commercial success, and made a dramatic contribution to the campaign for abolition. Equiano became a celebrity, touring the country to promote his book, and the cause.

In 1792 he married Susanna Cullen of Soham, Cambridgeshire, where the couple appear to have made their home. They had two daughters, Anna Maria (born 1793) and Joanna (born 1795). Susanna died in February 1796. Equiano left his daughters in Cambridgeshire, presumably with someone in Chesterton, and went to London, hoping to consolidate his estate and so provide for them. He died on 31 March 1797. Anna Maria died on 21 July 1797, possibly in a measles epidemic. Joanna married a Congregational minister and lived to the age of 62.

It is not known who erected the plaque, or composed the verse, but it may have been Martha Peckard, widow of the Revd Peter Peckard, Master of Magdalene College, Cambridge. Martha Peckard was a poet, whose surviving verse bears some similarity to that on the plaque; she also wrote a verse epitaph to a former churchwarden of the Peckard's parish of Fletton, near Peterborough. Her husband was an early supporter of the anti-slavery movement; it was he who set the legitimacy of slavery as the subject of the 1785 Latin essay prize which inspired Thomas Clarkson's abolitionist career. A friend and patron of Olaudah Equiano, it may have been through Peckard that Equiano met Susanna Cullen. Whoever was responsible for it, the plaque demonstrates eloquently how unusual the presence of an African and his family was in a Cambridgeshire village at the end of the eighteenth century, and the respect with which Olaudah Equiano and his achievements were regarded.

REASONS FOR DESIGNATION
The Church of St Andrew, Chesterton, is listed at Grade I for the following principal reasons:
* It is a large church of mainly C14 and C15 date.
* It contains C15 wall painting which is detailed and well-preserved
* It has group value with the large churchyard and wall, the Old Manor House, the vicarage, and Chesterton Tower, all listed
* Through a plaque commemorating his daughter, there is historical association with Olaudah Equiano, freed slave and prominent anti-slavery campaigner. This amendment is written in 2007, the bicentenary year of the 1807 Abolition Act.