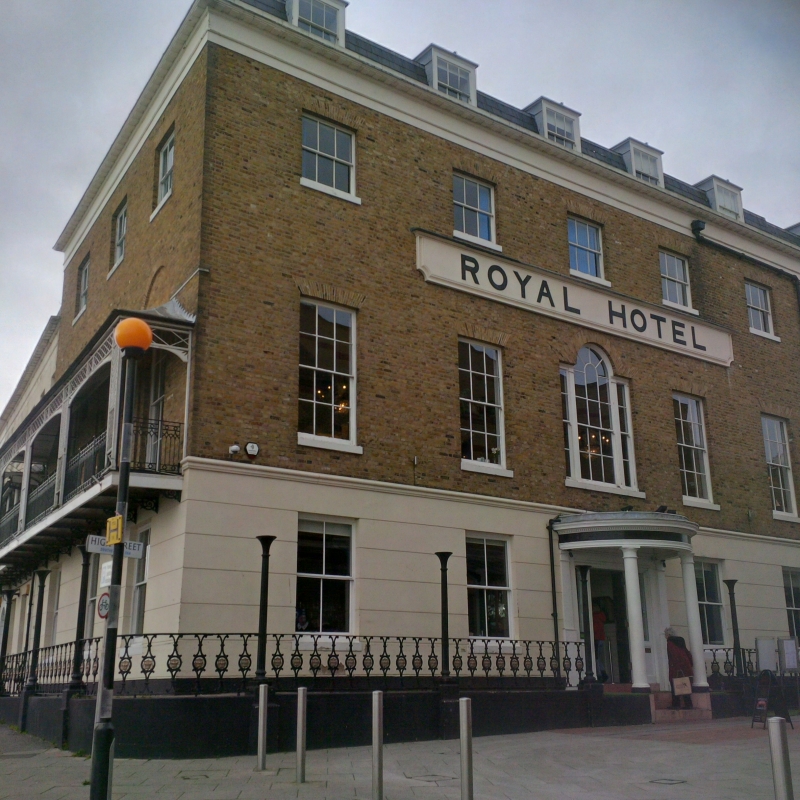 MATERIALS: the main materials are brick with incised stucco render at ground floor. The roof covering is slate.

PLAN: the building has a rectangular plan.

EXTERIOR: the Royal Hotel is a corner building with south and east frontages. It has two and a half storeys plus a basement, and has a parapet and modillion cornice. The east elevation, facing the High Street, has been extended to incorporate two C19 houses and the south elevation has been extended to incorporate two houses of Royal Terrace (Nos. 1 and 2). The original building has a five window range on the east elevation, and a three window range on the south; both elevations have double-hung sashes with vertical glazing bars and straight, gauged brick heads. There are three, projecting semi-circular entrance porches on the ground floor and six-panel entrance doors with semi-circular fanlights with radial glazing bars and fluted architraves. The first floor has a large assembly room with a Venetian window on the east elevation, above which are the words 'ROYAL HOTEL' embossed and painted on a moulded stucco panel. The first-floor windows on the south elevation open onto a cast iron covered balcony. There are box dormers above the parapet on both the south and east elevations. Nos. 1 and 2 Royal Terrace are three storeys with a parapet and modillion cornice. The first-floor windows on the south elevation open on to a Victorian ornamental cast-iron-covered balcony, similar to that on the hotel.

INTERIOR: at the ground floor there is a small entrance foyer with a late-C20 interior door, leading to a refurbished public house interior dating from the early C21, including a bar and drinking area, raised seating in the south-east corner, and a separate dining room. The basement below has been converted into a night club in the late-C20. The space has been sub-divided with partition walls to create a bar, dance floor and seating areas. None of the C20 and C21 fixtures and fittings on these floors are of special interest.

On the western side of the building is a hall with an open-well stair with a wreathed hand-rail leading to the upper floors. The stairwell is lit by a glazed, domed roof lantern. At the first floor is a large ballroom with C18 fixtures and fittings including matching fireplaces with marble hearths and moulded timber surrounds on the east wall, at each end, and heavily moulded Italianate cornices and ceiling mouldings. There are also moulded doorcases, jewelled wall-lights, heavy, gold-coloured chandeliers, hardwood floor covering and deep skirting boards. At the first floor there is also a kitchen and store area which retain decorative plasterwork features. The floors above have been separated from the hotel and have been incorporated into the adjoining building on the High Street; access was unavailable.

Southend-on-Sea grew out of Prittlewell, the largest of the six medieval parishes of which it is comprised. By the late C19 Southend had overtaken its mother parish in importance and in 1892 it became officially recognised as a town, when it was incorporated; ‘on-Sea’ being added the following year. The other parishes were absorbed and amalgamated from the end of the C19 through to the 1930s, to form the town as it is known today.

The name ‘Sowthende’ first appears in a will of 1481, although what is now known as Southend did not become urbanised until around 1700 when oyster cultivation began in the area. Within 20 years the whole of the foreshore from Southchurch westwards to Leigh was leased as oyster feeding grounds and oysterman’s huts began to be built, followed by humble terraces of cottages. Visitors started to come in small numbers to Southend to bathe in the sea, and in 1791 a syndicate was set up to develop a resort at ‘New Southend’. The Hotel and Terrace were built; a grand ball marked the opening of the Royal Hotel in 1793. The Shrubbery fronting the houses was laid out as a private garden for residents and Royal Mews to the rear were their stables. Both buildings were given the 'Royal' prefix after 1804, when Princess Caroline, wife of the Prince Regent stayed there. The royal association helped to boost the popularity of the resort, and in 1829 the first pier was built. The coming of the railways in the mid C19 stimulated growth and interest in the town, firstly in 1856 with the London, Tilbury and Southend Railway, which led to the development of Clifftown, followed by the Great Eastern in 1889. Southend flourished as a seaside resort from the end of the C19 through to the first half of the C20, but its popularity declined towards the end of the C20. In recent years however, major developments such as the University of Essex’s Southend campus and improvements to the pier and Esplanade have helped rekindle interest in the town.

Although the Royal Hotel retains the name it is no longer used as a hotel. The basement was converted to a night-club in the late C20 and the ground floor has been converted to a pub and function suite. The first floor ballroom has undergone minor restoration work in the early C21.

Royal Hotel, No.1 High Street, Southend-on-Sea, Essex is designated at Grade II for the following principal reasons:
* Architectural Interest: it is a good quality, late-C18 hotel, which survives largely intact, and has a complete Georgian ballroom with quality decorative features and joinery of special interest.
* Historical Interest: the hotel has a historic association with Princess Caroline of Brunswick - wife of the Prince Regent, who stayed there in 1804.
* Group Value: it has group value with the adjacent Royal Terrace (listed at Grade II) and other designated buildings and structures in the Cliff Town Conservation Area.