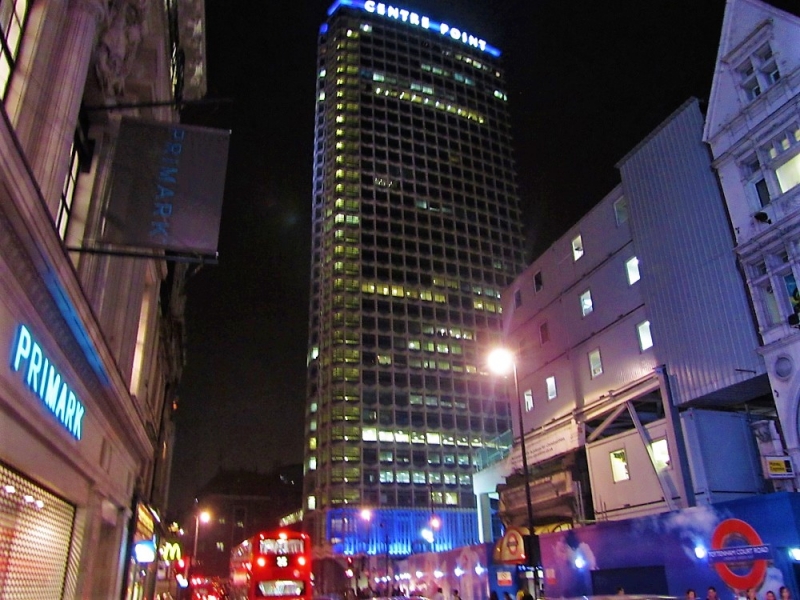 PLAN: Centre Point consists of three elements: a 33-storey tower to the west; a 9-storey rectangular block to the east, aligned north-south, comprising a former bank, shops and pub at ground floor; offices at first and second, and maisonettes above (Centre Point House), and a link over St Giles High Street connecting the two blocks at first-floor level.

TOWER: slender tower with slightly convex faces; the narrow side elevations are recessed at the centre with slightly canted projections on either side. An open-tread concrete staircase leads from the left of the west elevation up to a projecting platform to the original entrance (similar stair on E elevation of tower). First floor is double height and carried on a base in the form of a zig-zag valance. To left of west elevation is a vertical concrete 'brise-soleil' with hexagonal terminations to top and bottom, expressing the junction with the link block. The tower has pre-cast external facetted mullions in the form of 'H' turned on its side, which are partially load bearing and decrease in depth from bottom to top. This shape allowed the reinforcement of each unit to be bolted to that of the one above from within the building, which had to be erected without scaffolding due to space restrictions, and also enabled rainwater to be thrown clear of the structure without use of flashings. Thermal expansion joints are expressed between each mullion. Above the top storey is an open viewing gallery with the words 'CENTRE POINT' in neon-lit capital letters running along either side; these are a later addition. Above is a zig-zag cornice which projects to the building edge and has a facetted edge, picking up the rhythm of the structural frame below. The tower is supported on distinctive paired 'wasp-waisted' pilotis, eight in number. These are slightly facetted and clad in grey glazed mosaic tiles; those to upper facet in contrasting darker mottled grey.

LINK: this is supported on mosaic-clad pilotis to either side of the roadway. The underside has the exposed soffit of the inner staircase. Full-height armour-plate glazed curtain walls to both levels with steel patch-plates at intersections. The set-back clerestory has a very shallow pitched central apex.

EAST BLOCK: former bank at N end with original frontage; shops along W elevation with later shop fronts (not of special interest), together with the entrance to the maisonettes. Utilitarian service bays on east elevation to Earnshaw St. South end of the block has a remodelled pub front at ground floor (not of special interest). Above is a 2-storey tier containing offices. This is of equal height to the link, and is accentuated by a pre-cast concrete brise-soleil to E and W elevations forming a staggered rectangular pattern in front of the recessed windows (the S end is glazed). The upper level, placed above a set-back intermediary space, comprises a contrasting 6-storey section with 3 tiers of projecting rectangular balconies faced in grey geometric mosaic, alternating with sections of metal-framed curtain wall glazing with opaque glass panels beneath the windows. At either end of the block is a glazed stair compartment.

INTERIORS: the majority of the office, retail and residential interiors lack special interest. The following are of note, however:

TOWER: the main entrance, originally at mezzanine level accessed by the external staircase, is now in the glazed entrance hall on the ground floor created in 2000; the lobby is thus now on two levels linked by a stair installed in 2000. The lobby is paved in a distinctive manner with alternating long-and-short strips of white marble mosaic tiles set within a field of black terrazzo. The space is dominated by the exposed upper sections of the pilotis. At either end of the tower are granite-faced lift shafts, and a staircase with balustrades of thick cast-glass sheets set below heavy metal handrails. The rest of the tower comprises functional offices which were designed to be adapted, as has been the case, and is not of special interest. The only exception is the surviving staircase between the 31st and 32nd floors, which was intended to serve a restaurant (which was never installed).

LINK: a stair with heavy timber staggered handrails leads up to link; at its foot is a pair of copper-clad columns. The main space to the link has a central longitudinal mezzanine floor accessed by open stair at W end, and modern ramp at E. Mosaic floor matches that of tower lobby. Curtain-wall glazing on each side has a series of tapering glass fins which project upwards to the ceiling from the central steel patch-plates. Along each wall is a timber cill carried on a series of glass cross walls aligned with the glazed panels above; mezzanine has balustrades of similar design. At the E end is a further stair to the upper level of offices in the east block; mosaic floor to lobby.

EAST BLOCK: the former bank has a mosaic floor matching those of the tower lobby and link. Mezzanine level has a glazed timber balustrade, similar to that of link, supported on concrete piers clad in grey mosaic tiles. On the stair wall is an openwork sculptural metal relief by Jupp Dernbach-Mayen depicting banking motifs, currently (2012) in storage pending conservation work; on wall behind is a decorative panel of red and gold mosaic tiles on a grey tile background. The pub, shops, offices at intermediary level, and maisonettes above, are without internal features of note and lack special interest.

St Giles's Circus, one of London's most congested intersections by the 1950s, was earmarked for redevelopment by the London County Council (LCC) for the creation of a gyratory system. In March 1957, Hubert Bennett, the new LCC Chief Architect, produced a design for an 18-storey building, with nine and eleven-storey blocks to the east to rehouse the people living on the site. Legal disputes beween the LCC and landowners over compensation were circumvented by Harry Hyams' Oldham Estates Co, which purchased the land as a speculative undertaking whereby the LCC would receive the land required for road widening in exchange for a higher development than would normally allowed under the LCC's 'plot ratio' regulations. Hyams engaged Richard Seifert and Partners as his architects. Seifert's leading design partner was George Marsh, who had previously worked for Burnet, Tait and Partners. In November 1959 an application for a 29-storey office block, with an 8-storey block of shops and flats, linked by a bridge over a gyratory, received outline planning permission from Camden Council, and designs for a 31-storey curtain-wall tower with a lozenge-shaped plan, closely resembling the Pirelli Tower, Milan (1955-60 by Gio Ponti, Pier Luigi Nervi and others), were drawn up. Further modifications were required due to the LCC's demand for wider roads, and Seifert negotiated a reduction in the tower's footprint in return for two more storeys, plus an extra storey on the link; the lower block was subsequently widened. Work began on the lower block in 1961. A revised application for the tower received planning permission in January 1963, and the scheme was completed in 1966. The pond and fountains in the open area to the front of the tower, designed by the German émigré artist Jupp Dernbach-Mayen (1908-1990) were removed in 2009 as part of the Crossrail development.

Centre Point received limited but mainly enthusiastic reception. The design of the tower, which shows a deliberate move from the smooth regularity of International Modernism towards a more inventive, sculptural approach with strong contrasts between light and shade, was admired at the time and since for its confidence and originality. It rapidly becoming a symbol of the sixties: Ernö Goldfinger dubbed it 'London's first pop art skyscraper while Building (24 May 1968) enthused that 'like the Beatles and Mary Quant, this building expresses the supreme confidence of sheer professionalism... more than any other building Centre Point made London swing, it backed Britain, a product of real team work which must figure as an invisible export.' By 1966 however the market was saturated with new offices and Hyams, who had assigned the freehold to the LCC in return for a 150-year lease at low rent, chose to hold on to his portfolio until he could get a better price. Centre Point, including all the flats, thus gained notoriety for standing empty for many years at a time of housing shortage. It was not unique in this respect, but it was the most prominent empty high-rise and came to symbolise 1960s speculative greed. It has been more fully occupied since 1987 when it was sold and refurbished. In 2000 the area at the base of the tower was adapted to create a new entrance hall.

Centre Point is designated for the following principal reasons:

* Architectural interest: the slender tower, with its delicately modelled surfaces, carried on the very visible pilotis, is one of the most distinctive high-rise compositions of the 1960s and a major London landmark. Attention is given to detail in the way the brise-soleil expresses the width of the link on the other side. The link provides an elegant transition between the high and low-rise elements, its huge expanse of glazing forming a dramatic contrast with the lively rhythm of the tower elevation. The east block, while of less intrinsic design merit, nonetheless forms a key component of the ensemble and is integral to Centre Point's planning interest. Its brise-soleil, expressing the office tier, is again a distinctive use of this feature, forming a strong, horizontal continuum with the glazed link
* Planning interest: the relationship of tower, link and east block is a notable instance of Le Corbusier-inspired planning in London. The combination of, and contrast between, these elements is thus of note, not just the principal tower
* Technological innovation: for the ingenious use of pre-cast panels, which were hung from the frame without the use of scaffolding: the first tall building in London to be constructed this way, and for the link block, a very early use in Britain of armour-plate glazing with metal fixings
* Interiors: while the majority of the office, retail and residential interiors lack special interest, the tower, link and east block do each possess specific interiors of note which are specified in Details;
* Historic interest: . Centre Point, now seen as a symbol of 1960s 'swinging London',
is one of the most important speculative developments of its period in Britain, the most notable work of Seifert and Partners, one of the most prolific commercial practices of its day, and an early mixed-use development. The inclusion of shops, and especially housing, was a response to preserving these uses at a time when central London was becoming saturated with new offices