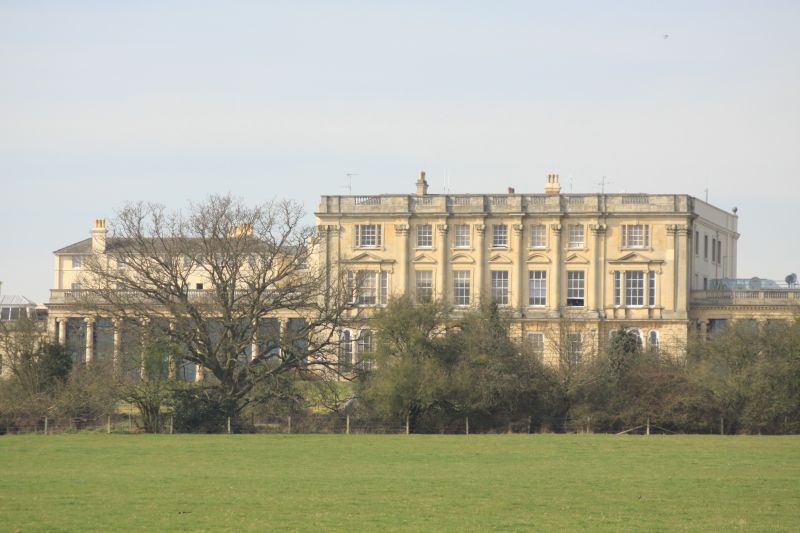 PEPPARD ROAD
1.
5128
Caversham Park
(BBC Records )
SU 77 NW 15/551
II
2.
Rebuilt, possibly by J T Crews, after the fire of 1850 for William Crawshay,
a Welsh iron master, who had bought the estate in 1838. Of the early C18 house
of the Earl of Cadogan nothing remains, and very little remains of the works
by Mr Acres and Capability Brown in the Park. 3 storeys and basement. Ashlar
with iron frame. Ground floor rusticated with Doric frieze over. Piano nobile
above. 7 bays, outer wider with tripartite windows, divided by engaged Composite
columns (end piers). Dentil cornice, balustraded parapet. Glazing bar sash
windows with raised surrounds and bracket cills, pedimented on piano nobile
(alternately triangular and segmental). Flanking set back Ionic colonnades
of 1840 by J T Crews. 9 bays each with balustrade over, returned to east,
orangery to west. Various extensions to east (including chapel) and west (former
school rooms etc) and also to north-west which has a classical Doric portico
to linked lodge dated 1890. To rear of main house is an Ionic Porte Cochere
(now a reception room). Interior retains considerable decoration of the post-1850 house. Large central hall with 2 balustraded galleries, Doric on ground floor, Ionic on 1st floor. The best room is behind Crews West colonnade - arcaded with columned screen to west and apse colonnade to east. Elaborate decoration in the principal drawing room with enriched doorpieces and so on. Chapel altered. A landmark for the railway.