A Grade I Listed Building in Silsoe, Central Bedfordshire 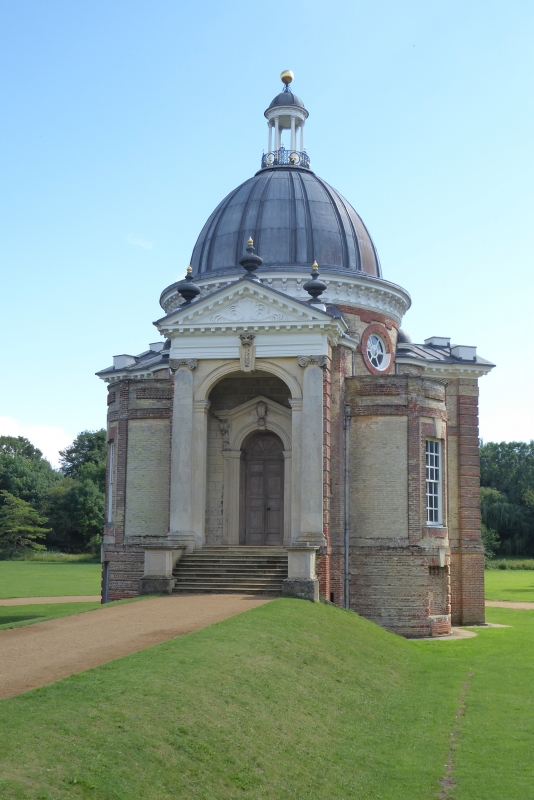 A garden or banqueting house, known as the Archer Pavilion, built 1709-11 to the designs of Thomas Archer for Henry de Grey, Duke of Kent.

A garden or banqueting house, known as the Archer Pavilion, built 1709-11 to the designs of Thomas Archer for Henry de Grey, Duke of Kent.

MATERIALS: red and yellow brick with stone dressings and lead covering to the dome and gables.

PLAN: the pavilion is situated at the south end of the Long Water on an axis with the house. The plan is formed of a central circular block from which project three rectangular wings alternating with three semicircular wings.

EXTERIOR: the pavilion is a miniature masterpiece in the English Baroque style. The central domed circular block and rectangular pedimented wings are two-storey and the semicircular wings are single-storey. The main block and rectangular wings have a modillion cornice to the eaves and pediment, and the latter have red brick channelled pilaster quoins. The semicircular wings are articulated by red brick flat pilaster strips and have plain parapets. At the junction of the curved projections with the central block are tiny semi-domes. The whole building stands upon a basement of horizontally channelled red brick which has double-leaf panelled doors to the north-east semicircular wing and blind windows with gauged brick flat heads and stone keystones to the other wings.

The north rectangular wing forms the porch of the main entrance and is approached by a flight of stone steps with cheek-walls and square plinths. Ionic stone pilasters flank the elliptical arch opening which has a keystone – bearing a coronet and the Grey family device of the staff – that breaks into the entablature. The pediment has a tympanum embellished with a carved shell decoration and is surmounted by three urns. The double-leaf panelled door leading into the Great Room has a moulded round arch surround of unusual Baroque design with angled sides and a pointed entablature supported by richly carved consoles. The porch is embellished with trompe l’oeil in the form of rusticated stone and niches containing Roman figure sculptures, and has fine stone paving laid in the pattern carreaux d’octagones. The other wings are lit by nine-over-nine pane sash windows in red brick surrounds with gauged brick flat heads, enlarged stone keystones, and red brick aprons. The upper storey of the south-west and south-east pedimented wings is lit by oeil-de-boeuf windows, as is the central block above the semicircular wings. The dome is surmounted by an Ionic circular lantern with wrought-iron balustrading and a ball finial to the cupola.

INTERIOR: this comprises the Great Room, a large circular space open to the roof, off which are three semicircular niches alternating with two rectangular closets, all with round arch openings. Spiral stairs lead to two plain closets above, formerly used as servants’ bedrooms, and down to a double privy in the basement and the brick-lined kitchen which retains a fireplace opening and niches for storage. The Great Room is lavishly decorated in trompe l’oeil consisting of a coffered dome, and fluted Corinthian columns supporting an entablature with a modillion cornice, upon which rest urns in niches flanked by either statues or hermes. Devices of the Grey family flanked by cherubs appear above the openings to the closets and niches which have decorative cornices, panelled dados and window seats complete with shutters. The south-east closet retains a small fireplace with a raised grate in a grey marble surround with an incorporated mirror above.

Wrest Park belonged to the Grey family from the Middle Ages until the early C20 and evolved in distinct phases, each of which respected the work carried out by former members of the family. In the late C16 the original manor house was described as a rambling building which had developed piecemeal from the medieval period. In 1671 Anthony, the 11th Earl of Kent, and his wife Mary embarked on the embellishment of the house and the formalisation of the gardens. A classical north front was added to the house in 1671 to disguise its irregularities, and a garden called 'The Great Court' was created on the north side to provide an impressive approach. The Long Water became the main feature of the garden, and parterres in the Great Garden to the south of the house were complemented by symmetrical wildernesses at the southern end. In 1702 the property passed to Henry de Grey who was created the Duke of Kent in 1710. He enlarged the gardens to the south, made alterations to the water courses, and created the formal woodland garden, continuing to enlarge it and adding numerous garden buildings until his death in 1740. A summer house was placed by the mill pond and a greenhouse was added to the Orange Garden. The architect Thomas Archer (1668-1743) was engaged to design a garden or banqueting house, known as the Archer Pavilion, and Cain Hill House (built c.1712-15, now demolished). The park continued to evolve, notably under Jemima, Marchioness Grey, who employed Lancelot 'Capability' Brown in 1758 to make the formal boundary canals curve more naturalistically and to soften the edges of the woodland garden. In the 1830s the house was completely rebuilt in Louis XV style by Thomas Philip, 2nd Earl de Grey, who carefully positioned it 200m north of the old house in order to maintain its earlier alignment with the Archer Pavilion. In 1916 the house was used as a military hospital and the following year the estate was sold by the family. After the Second World War it was purchased by the Government, and was acquired by English Heritage in 2006.

The pavilion was built to Thomas Archer’s design in 1709-11 at a cost of £1,809. Archer was educated at Trinity College, Oxford and travelled abroad for four years in the early 1690s, before returning to take up a position at Court. He was an amateur architect in the sense that he did not depend on architectural practice for his livelihood and received most of his commissions from the aristocracy. In the early C18 he assisted the 1st Duke of Devonshire with his works at Chatsworth, giving the house its curved north front and probably building the domed cascade-house; and at the same time he was engaged on Heythop in Oxfordshire for the Duke of Shrewsbury. These works demonstrate first-hand knowledge of the Roman Baroque buildings of Bernini and Borromini which Archer must have seen during his continental travels. The plan form of the pavilion at Wrest is inspired by Borromini’s S. Ivo della Sapienza (1642-60), the university church of Rome, which is based on two equilateral triangles interpenetrating so as to form a six-pointed star. Three of the points are rounded into convex semicircles and three are truncated to form concave curves. The resulting shape rises into a faceted dome which is resolved into a circle at the apex. Archer adapted this unique plan, making three of the points semicircular and three rectangular; and in place of the Corinthian pilasters and entablature that articulates the space in Borromini’s church, the architectural detail of the pavilion’s interior is achieved by trompe l’oeil, created by Louis Hauduroy in 1712. Hauduroy was a painter of French Huguenot descent who was also responsible for the decorative painting (now destroyed) on the staircase at Culverthorpe Hall in Lincolnshire, in 1704-5.

The pavilion at Wrest was intended for hunting parties, taking tea and ‘occasional suppers’, although the kitchen in the basement and the provision of bedchambers for both guests and servants also enabled more elaborate entertainments. The two rectangular closets on the ground floor were used as bedrooms, whilst the servants climbed the narrow winding stairs to the two bedchambers on the upper floor. The three semicircular alcoves were furnished with a table and two chairs, and the central Great Room was furnished with twelve chairs ‘cover’d with Scarlet Morocco Leather’. The painted decoration celebrates the rising status of the Grey family, incorporating the family coats of arms as well as busts which may be family portraits. An 1831 drawing by John Chessell Buckler shows that the decoration over each of the smaller doors, which included the emblem of the Order of the Garter, has since been lost. Hauduroy’s scheme has been restored on several occasions, and the closets and alcoves have also been redecorated many times.

The banqueting house known as the Archer Pavilion, built 1709-11 to the designs of Thomas Archer, is listed at Grade I for the following principal reasons:

* Architectural interest: it is a rare and major example of an early C18 garden building in the Baroque manner, its geometric form imbued with vitality whilst it stands in seeming repose at the end of the Long Water;

* Architect: it is one of the most accomplished and characteristic works of Thomas Archer, a key figure associated with the English Baroque School who has a unique place in English architectural history as the only architect to bring a direct experience of European Baroque to England;

* Craftsmanship: its architectural detailing and materials demonstrate craftsmanship of the first order, and enough of the original trompe l’oeil survives to convey the lavish nature of the earliest decorative scheme;

* Context: it is a key building in one of the most important historic gardens in England. The north-south alignment of the principal entrance of the house with the Long Water and pavilion creates a dramatic inter-relationship between the house and garden which is of exceptional significance;

* Group value: it has strong group value with the Grade I registered garden, Grade I listed house, and numerous other listed buildings on the estate.