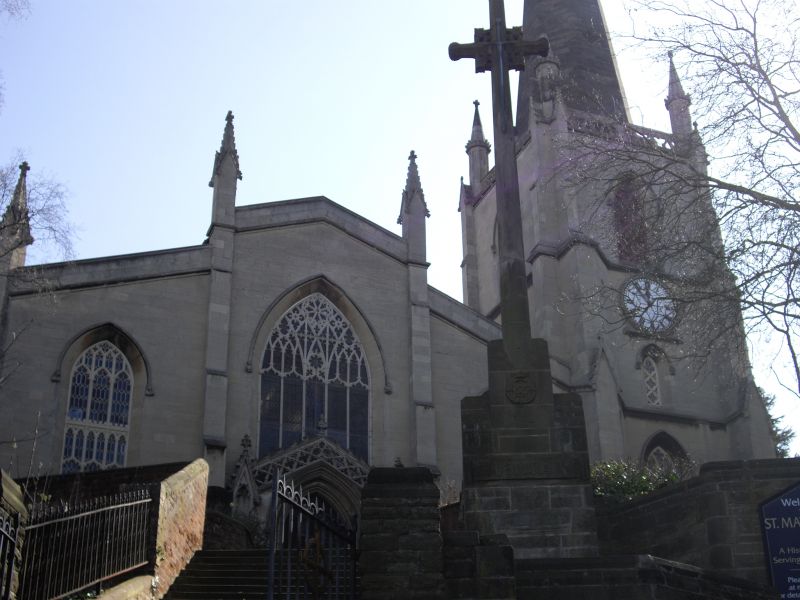 WALSALL MB CHURCH HILL
SP 0198 SE
16/25 Church of St Matthew
19.11.51
- II*
Church, rebuilt 1820-21 by Francis Goodwin, with late C15 chancel restored
1877-80 by Ewan Christian and with earlier remains. Chancel sandstone,
remainder of building faced with Bath stone. Comprises a nave with clerestory,
north and south aisles, transepts, a south-west tower with spire, and a chancel
with crypt and north organ chamber. Windows have pointed heads and cast iron
Perpendicular tracery. At the west end is a gothic portal. The tower is of
three stages with angle buttresses add a stone spire set back behind a pierced
parapet with corner pinnacles. The base of the tower forms a porch with moulded
pointed doorway. The chancel windows have pointed arches with Perpendicular
tracery restored in 1877-80. On the south side it is of four bays separated by
buttresses, on the north of two. In the third southern bay there is a doorway
at a lower level with chamfered surround and pointed head. In the fourth bay
a pointed arch opens into a rib-vaulted passage under the east end. Interior
has five-bay nave arcades with iron piers on stone bases. The flat nave
ceiling has a plaster fan vault with pendant bosses. On the north, south
and west sides are galleries which have timber fronts with blind tracery
decoration. The octagonal alabaster font is early C15 and is decorated with
shields of arms. The lead lining is dated "1712". The pointed chancel arch
is moulded. The timber screen dates from 1915. On the north side of the
chancel is a window with original C15 tracery, now covered on the outside by
the C19 organ chamber. The triple sedilia and piscina are C19 restorations.
The open timber roof over the chancel has three trusses with short king-posts
rising from tie-beams, braced to the ridge, with tracery infilling. The choir
stalls incorporate some C15 woodwork, including poppy heads and a series of
18 misericords. Under the western end of the chancel is a late C13 crypt with
two bays of quadripartite vaulting and two lancet windows. To the east is a
C15 tunnel-vaulted crypt. (BoE, p 292).