A Grade I Listed Building in Dormston, Worcestershire 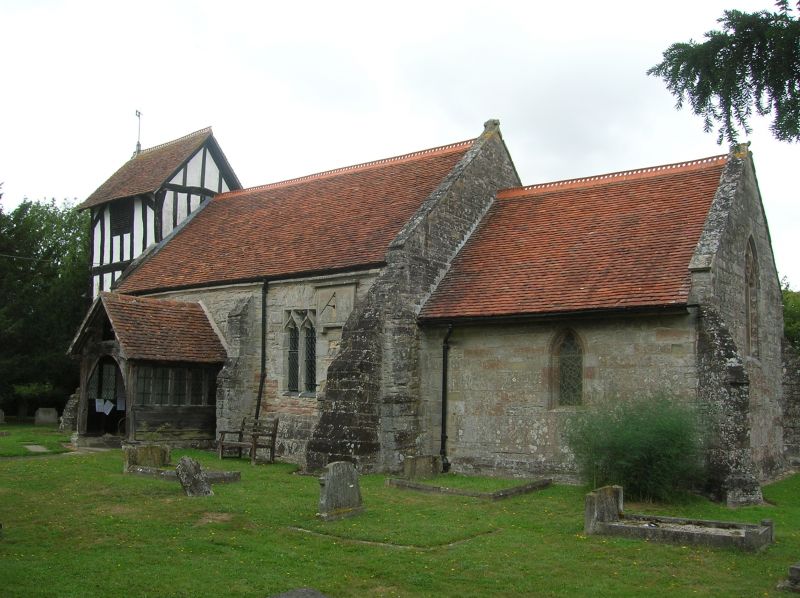 EXTERIOR: the church is divided into three separate components of differing materials. The earliest is the C14 rubble-stone nave, with C15 timber-framed tower, and 1905 freestone chancel. The buttressed nave incorporates a large south-east angle buttress. It has a two-light Decorated window and later two-light square-headed window to the right of the porch, which is under the relieving arch of a narrower window. The south doorway has a continuous chamfer and studded door, with stoup to the right. The porch, possibly also C14, is timber-framed, and retains original posts, brackets and tie beam to the ends. The half-glazed sides on dwarf walls are from the 1899 restoration. On the south-east side of the nave, beneath the eaves, is a large sundial with gnomon, dated 1841 and by Thomas Davies, 'sciagrapher of Inkberrow'. The north side of the nave has a blocked pointed doorway similar to the south side, and two-light square-headed window with ogee-headed lights. The two-stage tower is on a stone plinth with clasping buttresses. It is close-studded (with some replacement timber) with whitened panels and saddleback roof. It has louvred bell openings. A lean-to boiler house is on its north side. The chancel has diagonal buttresses, two-light Decorated east window and a cusped south window.

INTERIOR: The tower has internal X-shaped braces. A cusped window, with deep splay, in the nave west wall indicates that the tower was a later addition. Below this window is a chamfered west doorway. The nave has an unrestored two-bay (but three trusses) roof of tie and collar beams and vertical struts. The chancel arch is early C20 and the chancel has a cradle roof. Walls have been stripped of plaster in the nave, but have always been of exposed stone in the chancel. C20 parquet floors.

PRINCIPAL FIXTURES: The plain octagonal font is on an octagonal stem and base, of C14 or C15. There are six C16 benches, with moulded tops to square-headed ends. C17 communion rails have turned balusters, but the central gates are missing. Built into the south chancel wall is a fragment of a medieval churchyard cross discovered during 1905 building works, showing the crucified Christ, with Mary. The late C19 polygonal pulpit is on a stone base and is probably by C.C. Rolfe. There are medieval glass fragments in nave tracery lights. The chancel south window shows flowers, birds and musical notation, by Jim Budd, 1996. A wooden war-memorial diptych, with naïve scenes of soldiers dying in battle, is on the north wall, by W.H. Harris of Worcester, 1920.

HISTORY: A church with C14 core, to which the tower was added in the mid C15. The porch may be of similar date. The nave and tower were restored in 1899 by C.C. Rolfe of Oxford. The present chancel was built in 1903-5 by C.F. Whitcombe.

REASONS FOR DESIGNATION: The church of St Nicholas, Dormston, is listed Grade I for the following principal reasons:
* It has an outstanding late medieval timber-framed tower.
* It has a medieval timber-framed porch.
* Its nave retains medieval fabric and character, including an early roof.
* It has fixtures of special interest including C16 benches, C17 communion rails and C19 sundial.