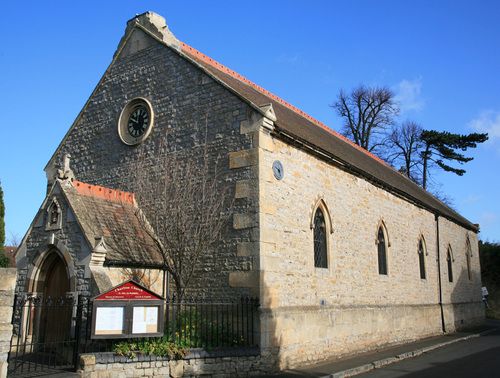 II
DATES OF MAIN PHASES, NAME OF ARCHITECT:
Parish church of 1872, adapted from an old barn.

PLAN: Rectangular plan of nave and chancel under a single roof, with added west porch.

EXTERIOR: A simple Gothic style church. Windows have hood moulds and polychrome stone arches. The 3-light east window has plate tracery and sill band, and above it is a traceried round window. North and south walls have 4 cusped windows and 2-light sanctuary windows with plate tracery. Jambs of the former wagon bay of the barn can be seen in north and south walls. Above the porch is a round clock in a stone frame, and the stump of a former west bellcote. The porch entrance has nook shafts, polychrome arch, below a niche with a figure of St John. Porch side walls have 2-light plate-tracery windows.

INTERIOR: Nave and chancel are a unified space with 5-bay queen-post roof on corbelled brackets, incorporating X-shaped braces between posts and outer raked struts, and 2 tiers of windbraces. The easternmost truss is on angel corbels, and has stencilled decoration on boarding behind the purlins. A brattished fascia at wall-plate level is pierced with quatrefoils. Walls are plastered, with boarded wainscot. There are C19 floor tiles by Godwin of Lugwardine, and raised wood floors below the benches.

PRINCIPAL FIXTURES: A faceted west gallery is on iron posts, the central facet of which projects on brackets. The open arcaded gallery front has trefoil arches on broad columns with foliage capitals. The gallery is reached by steep closed-string stair in the nave. The small octagonal font is on a round marble stem. The large round stone pulpit incorporates a roundel with IHS monogram. Nave benches have shouldered ends and diagonal boarding to the backs. Choir benches are similar, but have open arcading to the fronts. The communion rail is on iron standards with painted decorative brackets. The east window shows the Ascension, with Evangelists in the north and south sanctuary windows, all by Ward and Hughes, 1872. A 1914-18 war memorial tablet has a simple pediment.

HISTORY: The church was originally a barn, evidence of which is still visible on the exterior of the building. It was converted to a church in 1872 at the expense of Henry Workman, who is said to have undertaken the architectural work himself. He also built the adjacent school. An interior photograph dated 1877 shows the church as it appears now, except for stencilled foliage patterns on the east wall. William Forsyth, the sculptor, is said to have been involved with the church and presumably therefore carved the pulpit. The church was damaged by fire in 1985, which is probably when the bellcote came down.

SOURCES:
A. Brooks and N. Pevsner, The Buildings of England: Worcestershire, 2007, p 221.
The Church of St John the Evangelist, Charlton.

REASONS FOR DESIGNATION:
The church of St John the Evangelist, Charlton, is listed Grade II for the following principal reasons:
* It is a small C19 church, with interesting earlier origin, retaining C19 character and detail.
* The interior has undergone little alteration and retains the atmosphere of a late C19 rural church.