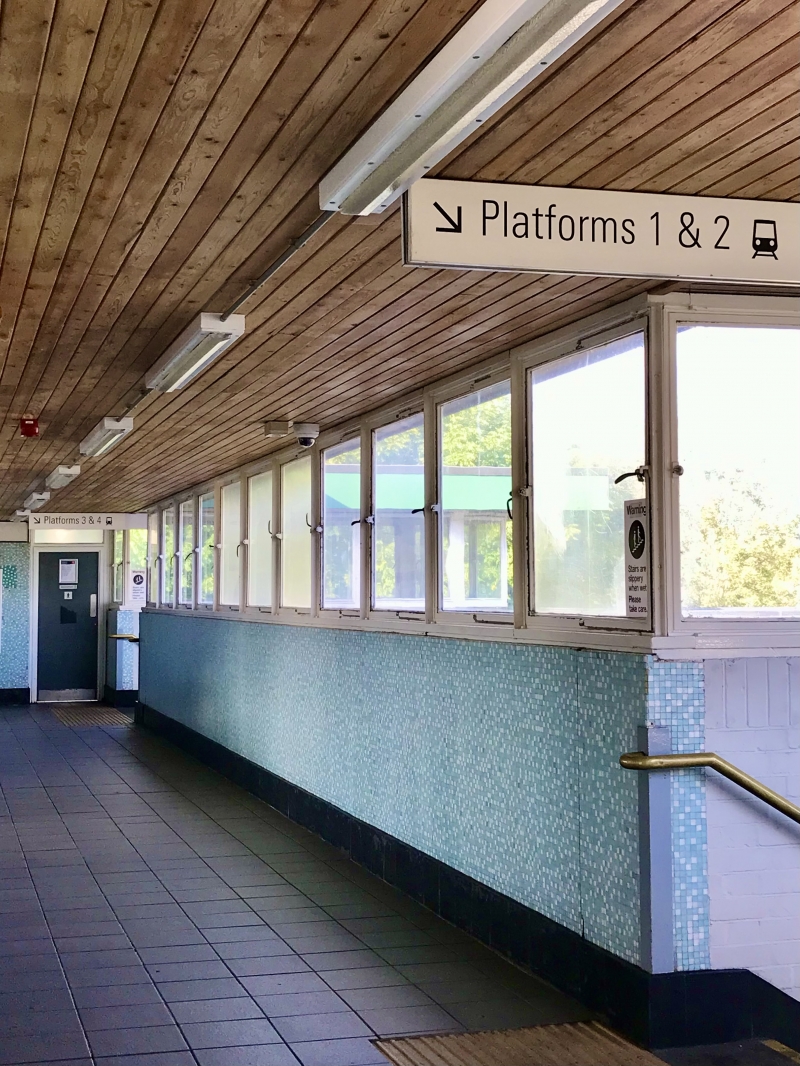 Station Building. 1959-60. Regional Architect Eastern Region, H H Powell; Project Architect Paul Hamilton, with John Bicknell and Ian Fraser. Composite steel and timber frame with pre-stressed , concrete cantilevers supporting the concourse roof. Cladding of light grey brick on blue engineering brick plinth; fascias of plywood; much plate glass. The central double-height station concourse projects above single-storey facilities ranged on either side. The concourse is linked to the two island platforms by an overbridge containing toilets, waiting room and staff facilities. Towering above the bridge are three tall lift rooms constructed in vertical board-marked fair faced concrete. Emphasised horizontal planes a telling counterpoise in the composition. Flat roofs with prominent projections oversail the concourse and secondary entrances. Fascias of various depths, the concourse roof provided with the deepest. Continuous clerestory glazing of several heights. The undersides of all canopies including those to platforms of V-jointed varnished softwood boarding. Below continuous clerestory glazing the interior walls of the concourse and booking hall are finished in pale blue glass mosaic, with the concourse columns in black mosaic. Under H H Powell, with his principal assistant Roger Walters, the Eastern Region Architect's Department was the most creative branch of British Railways, designing a number of powerful modern stations in conjunction with the Region's electrification. The new station for Harlow New Town was the flagship of this achievement. It is a building with powerful spatial qualities, of especial interest particularly for its architectural design. "The railway station is as a punctuation mark in a linear system at the point at which it meets the outside world. Few if any modern stations convey this idea so well as Harlow Town" (Architects' Journal, 15 December 1960, p.869).
Sources: The Architects' Journal, 15 December 1960,869-78; The Builder, 7 October 1960,644-8; The Architect and Building News, 18 January 1961, 83-8; Architectural Review, May 1961, p.31