A Grade II* Listed Building in Cookham, Windsor and Maidenhead 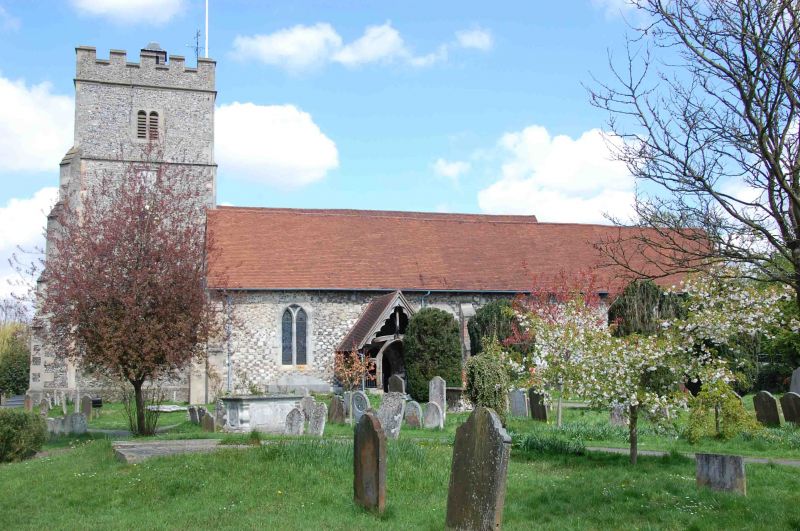 Chancel: two round-headed lancets to north and south, on the east wall a three-light window with C19 tracery in early C14 jambs. North chapel and north aisle: on the east a late C17 three-light window with diamond leading. On the north side of the chapel, two C19 lancets, between them a small C19 doorway.To right of these, three plain early C13 lancets with a blocked doorway between the two westernmost, with a two-centred head of two orders, the outer moulded and supported by jamb shafts with stiff leaf capitals.

Nave, north side: on left a C19 lancet, and to the right of this a mid C12 round-headed window. A C19 lancet on the west side.

South Chapel: on the east a three-light window with C19 tracery and a moulded rear arch with shafted jambs of early C14. On the south wall at the right, a two-light window with a two-centred head, pierced and foliated spandrel; C19 tracery. To the left of this, an early C14 window with plain tracery under a two-centred head. South aisle: three late C13 windows, the two eastern are of two pointed, uncusped lights. The westernmost window is similar but with the outer part of the heads continued to form an inclosing arch with pierced spandrel forming a good example of early tracery. Between the western windows is the south doorway with original jambs and rear arch in a C19 porch. There is a blocked second doorway at the south east. In the west wall a single lancet.

Interior: Chancel, five-bay nave with early C14 roof, with octagonal crown posts and straight braces to a collar purlin, and moulded tie beams. Four-bay north aisle and two-bay north chapel; six-bay south aisle and chapel. The aisle and chapel roofs are similar to the nave roof, but plastered at collar level. A two-bay arcade to north aisle with two-centred arches of two hollow-chamfered orders, the outer having stopped chamfers, semi-octagonal responds with moulded capitals and bases, partly chalk, part later stone. A two-centre drop arch c1200 of single order with moulded angles and nailhead ornament opens into the north chapel. The four-bay south arcade is of chalk, with arches of two chamfered orders, supported by octagonal columns and responds; a two-bay arcade with two-centred arches of two hollow-chamfered orders and octagonal columns opens into the south chapel. The chancel arch is two-centred with two, hollow-chamfered orders, labels on both faces and semi-octagonal responds with moulded capitals and bases. There are some medieval floor tiles at the east end of the chancel. At the south east of the north chapel is a C13 piscina with trefoil head, and a similar at the south east of the south chapel.

Monuments: Against the north wall of the chancel is a Purbeck marble table tomb with a vaulted canopy, supported by twisted columns, on the slab of the table, an elaborate brass, showing the tomb to be of Robert Peeke, clerk of the spicery to Henry VI, and his wife, d.1517. In the north chapel, a tablet with small kneeling figures in white relief by Flaxman, to Sir Isaac Pocock, drowned in the Thames 1810. On the south wall of the south chapel an elaborate mural tablet with kneeling figures to Arthur Babham d.1560, surmounted by an entablature, crowned by a shield of his arms.