A Grade I Listed Building in Finchampstead, Wokingham 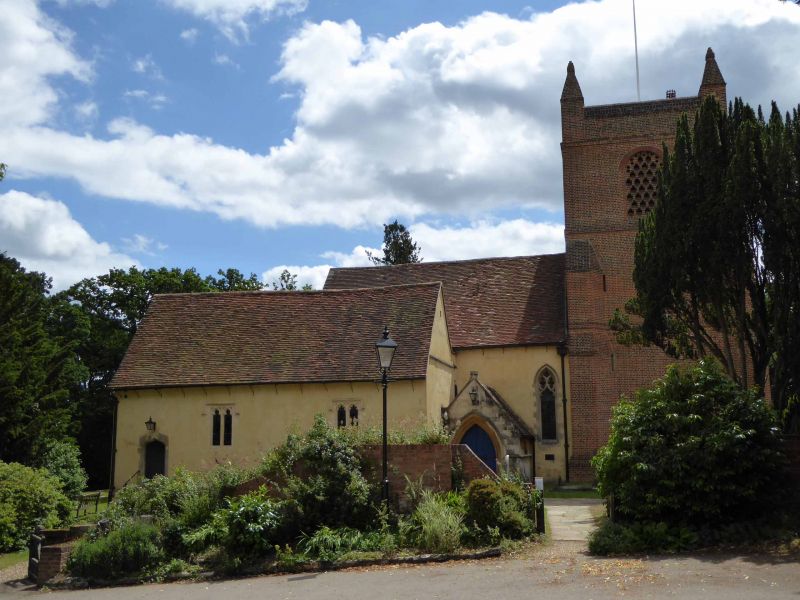 FINCHAMPSTEAD CHURCH LANE
SU 76 SE
12/1 (west side)
26.1.67 Church of St. James
G.V. I
Parish church. Dates from C12 with alterations and extensions in C14, C15, C16,
C18, C19 and early C20. Part painted stucco with stone dressings to windows,
brick tower and old tile roof. Apsidal chancel, 3 bay nave, 3 bay north chapel,
north porch and a west tower. The chancel and nave date from the C12 and
remaining from that date are 2 round headed windows in the north wall of the
nave, an aumbry on the same wall to the right of the entrance, a pillar
piscina with fluted capital and octagonal stem on the right side of the
chancel apse and a limestone font with a fine bowl with sloping sides enriched
with spiral roll and bead ornament; the stem and base are C19. The north
chapel has a date and inscription T1590H on the outside of the stone lintel
over the old north door, and is approached from the chancel through a 4-centred
arched opening of 2 chamfered orders with flattened semi-octagonal responds
with plain capitals and bases. The chapel is of more than one date; it has a
late C14 window with 2 ogee trefoiled lights under a square head; a C15 east
window of 3 similar lights and head; 2 large moulded tie beams in the roof,
a similar tie at a higher level with 2 large curved braces supporting
the purlins, and part of a large moulded wall plate with a roll mould and
chamfer with run out stops. An arcade of 2 bays opens from the nave to the
chapel, the eastern and narrower bay with respond and middle pillar is C19;
the other bay is similar to the chancel arch which was widened in C15 and has
semi-octagonal jambs with moulded capitals and bases. The chancel has a flat
ribbed timber roof with foliated bosses adjoining the apse; the nave roof is
of vaulted timber with C15 moulded tie beams with moulded bases, 2 of which
are missing on the south side. The east window of the nave is C19, the 2
south windows are C14..with 4 trefoiled ogee-headed lights with semi-quatrefoils
over, under a square head. The north doorway is probably a C15 insertion and
is of a single hollow chamfered order with a 2-centred arch; the gabled porch
is C19. The pulpit is C19 with pieces of C15 tracery and cresting. Tower:-
is dated 1720, on a panel on the north side, 3 stages, moulded plinth, strings,
angled corner buttresses, plain parapet with pyramidal finials on the corners;
the belfry windows have brick lattice tracery. There is one C15 stone window
of 2 ogee trefoiled lights on the west face, below which is a brick doorway with
a door contemporary with the tower under a round arched head. There are two
panelled chests preserved in the chancel, one with a sloping lid inscribed
'RH 1614', and another smaller one with the initials and date set with nails
'BL 1690 IT'. Monuments:- In the north chapel is an altar tomb with a black
marble top to Richard Palmer of East Court 1670. On the north side of the
chancel arch is a bronze tablet to Henry Hinde, Lord of the Manor of Finchampstead
East Court, who died in 1580. On the south wall of the nave a small brass to
Elizabeth Blighe, 1635 and above this a small brass with the figure of a lady
and her child richly dressed. In the chancel floor is a black slab with 2
small brass inscriptions, the upper commemorating Richard Marsh, a citizen
and grocer of London, who died in 1613, and the lower inscribed with a set
of laudatory verses in Latin. The church was restored in 1858 and again in
1914; it stands high on a mound with fine views to the south from the
churchyard. V.C.H. Vol.III p.245. B.0.E. (Berkshire) p.143.