A Grade I Listed Building in Durham, County Durham 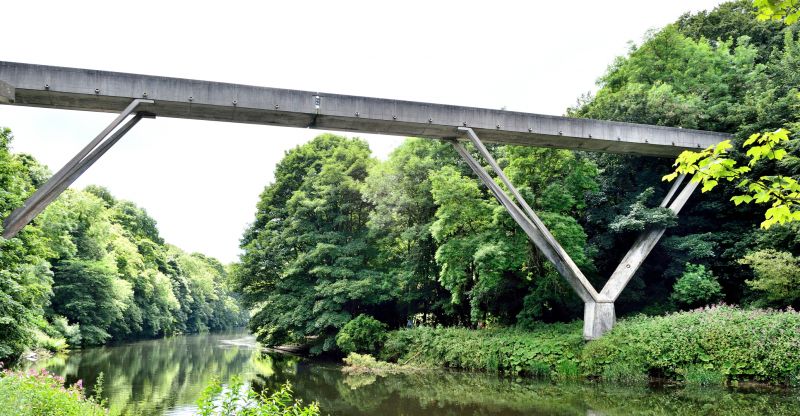 Footbridge over river. 1963.
Ove Arup and Partners (Ove Arup, engineer). Reinforced concrete;
concrete made with white cement and Shap granite and surfaces grit blasted. Consists of two trough shaped lengths of deck, each supported by V shaped legs on single support at base of V. Halves constructed on banks and rotated about base support to meet over middle of river. Connected by bronze expansion joints in the parapets which are in fonn of a T and a U turned through 90 degrees and interlocking, said to symbolise connection of Town and University. Deck drained by water spouts at regular intervals, which give rhythm to the elevations. Tops of parapets shaped for structural reasons and to provide surface comfortable to the touch. This dramatic, beautifully detailed and ingenious bridge was designed by Sir Ove Arup personally and was commissioned by the University of Durham.
Civic Trust Award 1965. Winner, Concrete Society Certificate ofOutstandingPerfonnance (Mature Structures Category) 1993.
[Concrete Quarterly, January-March 1964]