A Grade I Listed Building in Wareham, Dorset 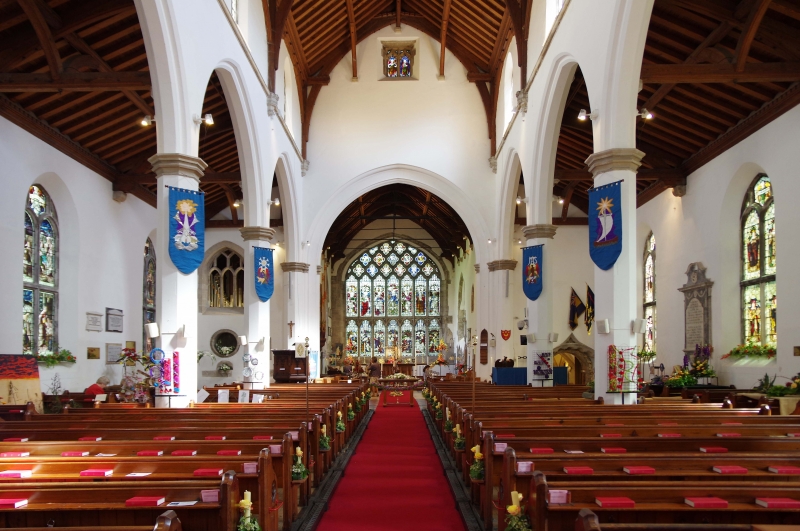 I
A Saxon minster of the 8th century, with south chapel of the 12th century, much early 14th century work in the chancel; west tower probably early 16th century. Nave and aisles rebuilt in 1840-2, by T.L. Donaldson. Organ chamber by Crickmay & Sons of Weymouth, 1893-4.

Plan: West tower with attached west porch, and vestries in the returns between tower and aisles. Four-bay nave with two aisles, long chancel. South chapel at a lower level with former treasury above, and a further small chapel called the Becket chapel at the south-east angle of the chancel. Organ chamber north of the chancel.

Exterior: The tall sturdy tower can be seen across the south part of the town, and dominates views from the River Frome. It has four stages, with diagonal buttresses to the first three. There is a big transomed west window with four lights, and indeterminate Gothic tracery (probably of 1842). A small rectangular light in the next stage, otherwise the lower three stages are blind. The belfry has one large louvred bell opening in each face, without tracery except for some Perp cusping in the east face. The battlemented parapet has continuous mouldings to the merlons. There are no pinnacles, and a polygonal north-east stair turret. On the north side of the tower is a lean-to vestry, probably early 16th century, as is the west porch. The porch has a solid parapet with four heavy moulded panels in the west face, `already in the spirit, if not the forms, of the Renaissance' (Pevsner). The nave is tall, with lean-to aisles. The aisle windows are big, with two lights, one transom and no cusping. Similar but smaller clerestory lights without transoms. The chancel is quite long, with a transverse gabled organ loft (north). Its north window is Dec, reset from the chancel wall, dense cusping and a rose with twisting tracery. East of this is a 14th century containing Dec window of three lights, two with ogee heads, and with three six-foiled circles in the tracery: probably contemporary with the C14 Dec rebuilding and enlargement of the chancel. At the east end the corners are masked, on the north by a big square stair turret like a clasping buttress, to the south by a larger plain buttress-like projection, the Becket chapel. It has one small Perp window facing east, and is roofed by a broad slope of stone with weatherings. The south chancel wall has a three light Perp window with cinquefoiled cusping, and adjacent, a 14th century priest¿s door with chamfered head. The south side is plainer than the north; the south chapel has almost unrelieved stonework with few windows, and a half sunken doorway. Its east window is of two lights, with a quatrefoil in plate tracery, c. 1200-30.

Interior: Entry to the nave is from the west through the majestically high Perp tower arch, with wave mouldings separated by slim single shafts. The four-arched nave arcades have tall octagonal piers with moulded capitals, and double-chamfered arches. The clerestory windows rest on a continuous sill course. The nave roof (1903) is of dark-stained timber with arch-braced collars and spindly queen-posts. Chancel roof of 1893-4. The west walls of the aisles are said to be Saxon; that on the south has a small three-light Dec window with reticulated tracery, set high up. There is a big east window under a four-centred arch, of seven lights with one transom, and reticulated tracery. The lower part was apparently blocked but reinstated in 1842. The chancel has a triple sedilia with a fourth arch containing a double piscina. Directly east is a small door to the tiny Becket chapel (6 ft. 3 in. by 8 ft. 6 in.) lit by a small three-light Perp east window. It has a one-bay lierne vault with circular moulded bosses. There is an ogee-headed piscina in the south wall. Opening into the chancel high up on the south side is a reset doorcase, probably late 12th century, with a pointed arch but still with Norman nailhead ornament and a band of zigzag carving around the jambs. It formerly led into a room above the south chapel, said originally to be a dormitory, but probably used as a treasury by the 16th century. In the east wall of the north aisle is a double piscina of the 13th century under a trefoil head, and a 12th or early 13th century oculus with moulded frame, reset here from the chancel north wall, 1893-4. Above, a three-light Perp window now opening into the organ chamber. The floor level of the south chapel (of St Edward) is c. 3 feet lower than the nave; it is entered from the east end of the south aisle through a Norman arch, now framed by a Dec outer arch with cusping, sub-cusping and an ogee point. This probably originated as a tomb canopy. Quadripartite vault of two bays, springing from Purbeck marble wall shafts with moulded caps and bases. The vault ribs are chamfered, the bosses circular. The chapel has two tomb recesses: at the north-west, one under a triangular gabled arch with cusps, and at the south-east a lower round arch with similar cusping. Near it, a small trefoil headed piscina, and a small Norman opening above it (perhaps a window) now a cupboard with traceried oak doors. The floors are of stone flags, with some red and black Victorian tiling around the chancel step, in the aisles etc.

Principal Fixtures: The nave benches are of pine, probably the seats of 1842 rearranged. Oak pulpit (1882) with blind traceried panels and foliage carving. An exceptionally fine 12th century lead font, one of about thirty lead fonts extant in England, and the only hexagonal one: the bowl has high relief figures of the twelve apostles, each standing under an arch on shafted columns; it sits on an octagonal base with short attached columns. Organ of 1883, Gothic oak case with painted pipes.

Carvings: a badly weathered 14th century Crucifixion is set in the north aisle east wall. Nearby are several stones with partial Saxon inscriptions and Latin elements, discovered in 1841-2, some reset in the walls. One to Catgug (a Brittonic male) on reused Roman masonry, and one to [D]eniel, both 7th - early 9th century; one to Gongorie, 9th century (?); one to Vidcu (7th century, in the north-west vestry). Also several loose column fragments of the 5th - 8th centuries, a fine 13th stone coffin, a 14th century coffin lid with cross, and a stone cresset.

Subsidiary Features: Large walled graveyard to the north and east, and in front of the west tower a forecourt or small square framed by vernacular buildings, with an alley leading south-west onto the quay.

History: Wareham was a significant port for traffic with France by 700. William of Malmesbury recorded in the 12th century that St Aldhelm (Bishop of Sherborne by 705) founded a church close to Wareham, and it is likely that Lady St Mary is that church. It was associated with a nunnery, probably the earliest religious foundation in Dorset. This may also have been where Brihtric, King of Wessex, was buried in 802, and where the body of King Edward the Martyr rested temporarily after being murdered at Corfe Castle in 978. The nunnery was destroyed in a Danish raid in 876, and rebuilt by Alfreda, daughter of Alfred the Great, c. 900. The foundation was given by Edward the Confessor to the abbey of St Wandrille in Normandy, c. 1042-66, and transferred c. 1100 to the Benedictine abbey of Lire, at which time a cell of French Benedictine monks came to Wareham. The south chapel was built at about this time, and vaulted in the early 13th century. A painting of c. 1840 shows that the nave was Saxon, with slit windows, clerestory, and a high porticus on the north side. In 1840 it was deemed structurally unsafe and a new nave was planned, increasing the accommodation from c. 450 to 995. Demolition began in May 1841; reports in the Dorset County Chronicle (May 6th and May 20th) stated that the old nave was only 200 years old and that the two important features of the church, 'the noble tower and spacious chancel', were retained: the round Saxon arches had been mistaken for a crude 17th century attempt at Classical architecture. The church was reopened on 29th September 1842; builders Jesse Cornick & Sons of Bridport. The chancel was shortened by some eleven feet to allow for a longer nave. The architect if the restoration, Thomas Leverton Donaldson (1795-1885), is best known as a founder of the Insitute of British Architects, in 1835, and as a teacher, serving as a Professor of Architecture at University College, London, a post he established. Galleries on three sides of the nave and aisles were removed in 1903.

Reasons for Designation: The church of Lady St Mary, Wareham, is designated at Grade I for the following principal reasons:
* An early Saxon foundation serving a nunnery, and associated with two Saxon kings; the Saxon nave survived until 1841.
* Saxon commemorative inscriptions and architectural fragments of the 5th to the 9th centuries, some on re-used Roman masonry: a reminder of Wareham's importance as a minster.
* Late Norman sunken south chapel with former monastic dormitory above, and with a good Early English rib vault.
* Exceptionally fine 12th century lead font, one of about 30 remaining in England.
* Late Perp west tower which dominates the nearby quayside on the River Frome.
* Two good 13th century armoured effigies, probably both of the d'Estoke family.
* Donaldson's restoration of the 1840s is of note in its own right.