Church of SS Mary and Laurence

A Grade I Listed Building in Great Waltham, Essex 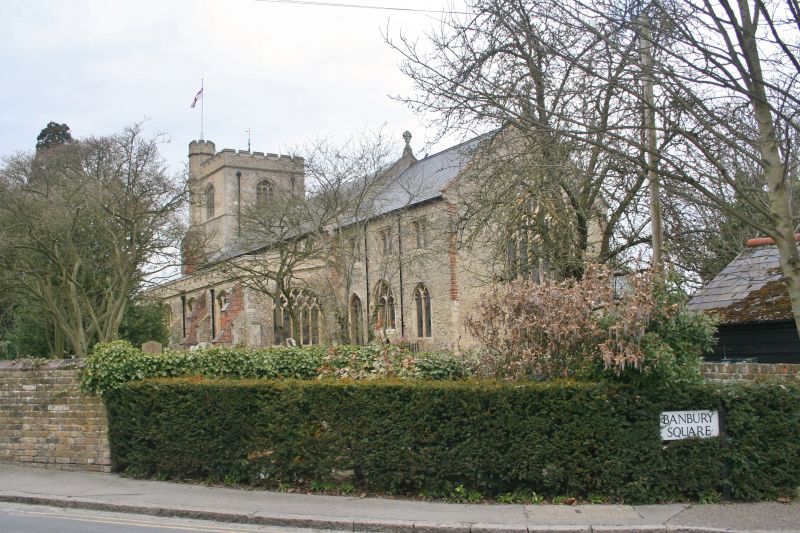 I
Large Church of Norman origin. Principally built of flint and stone and stone dressings with some Roman tiles incorporated. There are C18 and C19 brick buttresses to the tower and South aisle.

EXTERIOR: The west tower has a castellated parapet with gargoyles, three South-facing segmental arch windows with tracery and diagonal buttresses. There is a corner staircase turret and C12 single splayed windows in the lower North and South walls. There is some Roman brick in the Norman quoins of the nave and chancel and there are traces of round headed C11-C12 century windows in the east wall of the chancel and early C12 windows in the north and south walls of the tower. C16 clerestory windows with drip mouldings have been inserted on the North and South Walls of the chancel. The aisles have castellated parapets and the North aisle has pointed arch windows. The South porch has a pointed arched entrance with a figure of Christ in a recessed niche above. Two other carved figures of saints are displayed on the corner buttress.

INTERIOR: The nave is unusually wide for a Norman Church at and has a fine and rare early C16 roof with alternate tie beams and angel hammer beam trusses. There are said to be traces of medieval painted frescoes over the chancel arch and on the East walls of the chancel and nave. The south arcade is circa 1530 and the roof of the south aisle is of the same period. The north vestry has a C14-C15 century doorway. The interior fittings include about 30 mid-Cl5 oak benches with traceried ends. There are some good monuments including one to Sir Anthony Everard (1614). It has reclining figures of Sir Anthony and his wife in an arched recess with panelled soffit. There are two brasses, one of 1580 and one of 1617, and there is an achievement of arms and inscription to Hugh Everard of Langleys 1703. (RCHM 1.) The North aisle has remains of C16 brasses to the Wiseman family. The C17 font in the South aisle is of plain design. The rood screen, pulpit and choir stalls are all late C19 and the organ was rebuilt as a memorial to the fallen of both World Wars. In addition to the medieval glass in the South aisle, there are a number of C19 stained glass windows. These are by O'Connor, presumably Michael or his son Arthur, who worked in the mid C19 for prominent architects including Pugin, and there is one by Jon Pace. The church has a peal of eight bells, the oldest of which was cast in 1336 and the newest in 1796.

HISTORY: Great Waltham is located to the North-West of Chelmsford. In the C11 and C12, the feudal manor of Walthambury, close to the present-day village, was owned by the De Mandeville family, later made Earls of Essex by King Stephen. The church was probably constructed in the late C11 by Geoffrey De Mandeville, who resided at nearby Pleshey Castle, and it is the most prominent building in the village. The tower, nave and chancel are principally of Norman construction. The South aisle was added in the C14 and remodelled in 1530. The nave was heightened, given a clerestory, and the roof replaced in the early C16. The South-West corner of the tower collapsed in 1798 and was repaired, later to be restored in the late C19. There are substantial alterations and additions of the C19, undertaken initially by F. Chancellor and subsequently by A. Nutt. These include the construction of the North aisle and vestry, rebuilding the chancel arch and south porch and some alterations to the tower.

SUMMARY OF IMPORTANCE: The Church of St Mary and St Laurence is a fine example of an English parish church with a high survival of Norman and medieval fabric and thus survives substantially in its original condition. For a place of worship, the assessment for designation and grading lies in the age and rarity, intactness of both fabric and fittings and architectural and artistic quality of the building. The church possesses many important and rare Norman and medieval features, including the wide nave and intact C16 roof, medieval heraldic glass and C15 box pews. It is suggested that there are traces of painted medieval frescoes. Considerable additional interest is found in the C16 and C17 brasses and monuments in the church, particularly the Everard Monument of 1614. For all these reasons, the church merits listing in the highest grade.

All the listed buildings in the Village form a group (Dweina and No 1, Elm Cot and Lime Tree Cottage and Almshouses are buildings of local interest).