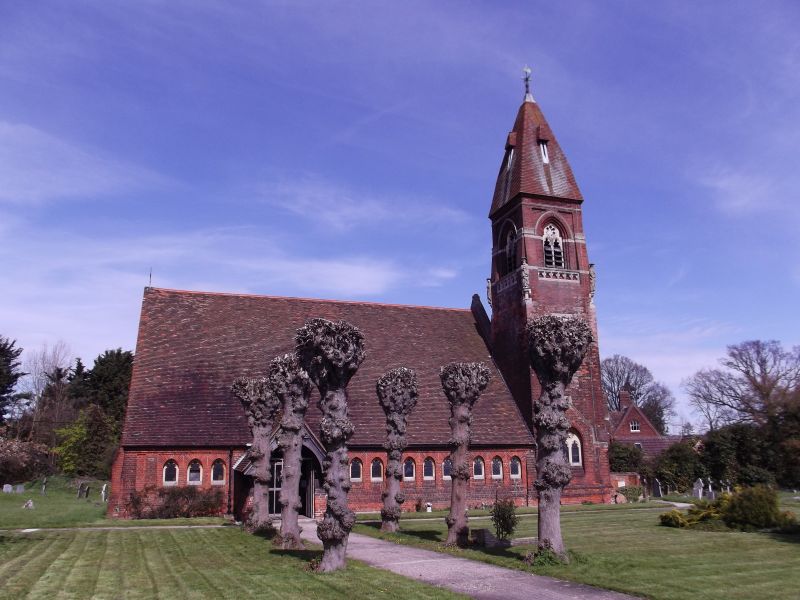 EXTERIOR: Stylistically the church is a free adaptation of C13 Early English architecture. The show façade is to the south and is dominated by the huge catslide roof over the nave and south aisle, and the south-east steeple. The east end is now incomplete following the demolition of the chancel in 1984-5 to just above ground level. The steeple is in two stages with a very tall lower storey. This has a window low down on the south face with two cusped lights above which is a roundel bearing the eagle emblem of the patron saint. Around this window is a string-course which steps up to a gable over the window. At the corners of the tower, at the level of the first stage/second stage junction there are life-size figures of the four Evangelists. The lower stage of the tower is unbuttressed and in the belfry stage the effect of buttressing is created by the recessing of the surround around the belfry windows. These are of two cusped lights with a sex-foiled circle over. The belfry windows are under stepped brick arches. The spire is square on plan and its sides are not straight but gently curved. Each face carries a lucarne half-way up. The immense roof over the nave and south aisle results in a very low side wall to the aisle. This is divided into five bays, four of which have three, equal-height trefoiled windows: there are shallow buttresses between the bays. The fifth bay (second from the west) is taken up by the porch which is of highly original construction. It has a brick plinth with raked timbers rising from it. Externally these are fitted with curved braces which support the eaves. The north side of the church, having no aisle, has much larger windows than on the south. They are of two lights in the Geometrical style with cinquefoiled circles in the heads. The west window is also Geometrical with four lights and three sex-foiled circles in the tracery. The polygonal apse now stands to the height of about one metre and bears the foundation stone dated 23 May 1870. The chancel arch is now exposed to view and has been bricked out.

INTERIOR: The internal walls are of bare red brick. On the south of the nave is a five bay arcade to the aisle. It has moulded brick arches and circular piers and capitals. It has some unusual, inventive detail. The arches include an order of bricks with small circular recesses and nicks in the raised portions. Similar but slightly different detail is applied to the capitals. The roof over the nave is canted.

PRINCIPAL FIXTURES: The most interesting furnishings are the pulpit, lectern and stalls which were carved by Col. Nevill Tufnell of Langleys (a house in Great Waltham) in 1869, evidently in readiness for the new church. The lectern has four standing figures of the Evangelists round the base - figures which are emulated on the tower. The semi-circular pulpit (which appears to have lost its base) has figure carvings while the stall fronts have small square panels with various motifs. The font is circular and has a band of overlapping, fluted semi-circular motifs. The open-backed bench seating has ends with a large, sharply inclined chamfer on the east edge.

HISTORY: Copies of Chancellor's drawing for the church hang inside the church and are dated February 1870. It was built in 1870-1. The site, a former osier bed, turned out to be unfortunate in that it led to subsidence at the east end and this was rebuilt in 1892-3. Problems resurfaced in the late C20. Much underpinning work took place but the chancel was a casualty being demolished in 1984-5. Frederic Chancellor (1825-1918) was a successful provincial architect based in Chelmsford where he began independent practice in 1846. He was mayor of Chelmsford seven times from 1888.

REASONS FOR DESIGNATION:
The Church of St John the Evangelist, Church Lane, Ford End, Great Waltham, is designated at Grade II for the following principal reasons:
* It is of special interest as an accomplished mid-Victorian Gothic Revival church by a noted local architect and which displays enterprising and original architectural treatment, notably in the design of the porch, the steeple and the south arcade
* The loss of the chancel is to be much regretted but the remaining building still has a fine, strong visual presence beside the main road through Ford End
* Some of the fittings are interesting as examples of Victorian craftsmanship by a talented `amateur', Col. Neville Tufnell