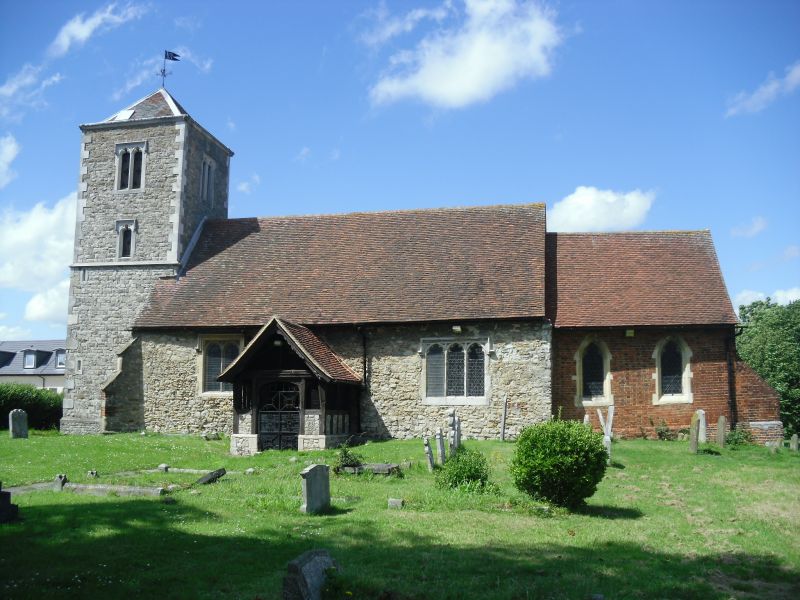 II*
DATES/ARCHITECTS:
The nave is C14. The S porch was added in the mid C15 and the W tower was built c.1500. The chancel was rebuilt in 1597. The part of the N wall of the nave was rebuilt in 1702, when other repairs were also carried out. The church was restored in 1888 by Joseph Peacock. In 1930 there were repairs to the nave, including removing the plaster ceiling, which were by Reginald Blomfield. Further repairs to the porch took place in the second half of the C20.

MATERIALS:
The chancel is brick, the nave is uncoursed rubble, and the tower is coursed stone. The S porch is timber-framed on dwarf stone walls. Stone dressings. Tiled roofs.

EXTERIOR
The chancel of 1597 is brick, but was repaired in the C18 and again in the C19. The N wall is blank and has a chamfered plinth. The E wall has a two-light E window in a Decorated style. Above it is a stone plaque recording the rebuilding of the chancel in 1597. There are two C19 single light windows in the S wall.

The eastern part of the nave N wall was rebuilt in brick in the C18 with heavy, brick buttresses and has a reset C15 window of two foiled lights in a square frame. The C14 N door is blocked. The nave S wall has a 3-light C15 window similar to that on the N to the E of the porch, and a 2-light window to the W of the porch. The S door is C14 and is covered by a fine, but very restored, C15 timber porch. The porch has two sets of four-light openings with moulded mullions on either side and heavily cusped barge boarding. The outer doorway is four-centred and set within a square frame; the inner part of the porch is supported on a heavy, carved beam with curved braces. In the spandrels are a collared bear on a ragged staff, a rosette and a dragon with a forked tongue. The porch now stands on dwarf stone walls, but formerly had weatherboarding on the lower part.

The W tower is of three stages, and a plain parapet and a pyramidal cap. The W door is C15 and has a hood mould. The upper stages have early C16 windows with cusped lights in square frames.

INTERIOR
There is no chancel arch, but nave and chancel are differentiated by their roofs. The late C16 chancel roof is of two bays, with the central rafter having curved braces forming a 3-centred arch. The ridge is moulded and the side purlins are moulded and embattled, and have curved wind braces. The much simpler nave roof is probably early C18 and has five stop-chamfered tie beams. Formerly ceiled, the plaster covering was removed in 1930. The tower arch is c.1500 and of two orders, with dying mouldings.

PRINCIPAL FIXTURES
A C15 brass indent in Purbeck marble for a female figure, a palimpsest reusing a C14 slab, and another indent with the demi-figure of a priest. Fine late C17 or early C18 communion rails with twisted balusters. Early C18 Royal Arms of Queen Anne. Inscription on the N wall of the nave recording the repair of the church by the parishioners in 1702. C19 font and timber pulpit.

HISTORY
Holy Cross was the parish church of the medieval village of Basildon, and remained the centre of what was largely an agricultural settlement through the first part of the C20. When Basildon was developed as a New Town following WWII, the area around Holy Cross became known as the Fryerns and has much modern housing.

REASONS FOR DESIGNATION:
Holy Cross, Basildon is designated at Grade II* for the following principal reasons:
* Medieval parish church of the village that developed into the modern new town of Basildon.
* C14 nave core, with alterations of the late C15 and early C16, including the very fine C15 S porch, nave windows and the early C16 W tower.
* Chancel rebuilt in 1597 and preserving a very fine roof of that date.
* Later alterations and restorations of the C18 and C19.
* Some good fittings, including early C18 communion rails.