Chapel of the Immaculate Conception, Bocking 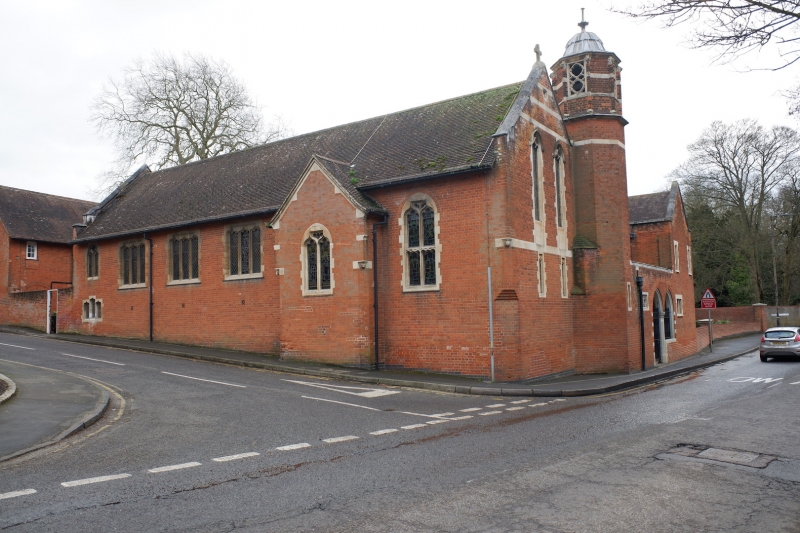 A convent chapel and sacristy originally constructed for the Franciscan Sisters of the Immaculate Conception in 1898 to the designs of John Francis Bentley. Constructed of red brick with stone dressings and with plain tiled roofs, the chapel stands at the north western corner of the convent.

A convent chapel and sacristy originally constructed for the Franciscan Sisters of the Immaculate Conception in 1898 to the designs of John Francis Bentley. Constructed of red brick with stone dressings and with plain tiled roofs, the chapel stands at the north western corner of the convent.

Plan: The chapel is oriented facing west and comprises an antechapel, choir and sanctuary, with a single transept to the south of the sanctuary. A sacristy runs parallel to the choir and connects to the transept. The transept, originally set aside for lay people, can be accessed from the outside via an arcaded porch and contains a single confessional.

Exterior: The principal elevation faces on to Broad Road and comprises the west gable of the chapel to the north separated from the external elevation of the confessional and an arcaded porch by an octagonal bell turret. The turret terminates in a cupola with four stone tracery openings at the cardinal points, and eight grotesque heads carved at the corners, on top of which is a small lead-covered dome and finial. The chapel gable features two lancet windows with paired daggers in the tracery at their heads, and beneath each one a vertical slit window lighting a passage behind the altar. Four bands of masonry run across the brick elevation which terminates in a plain stone cross at the ridge line. Mitred brickwork turns the northern corner of the chapel onto Convent Lane.

The Convent Lane elevation is six bays long, each expressive of their function. To the west the sanctuary window has two cusped lancets divided horizontally by a transom. Adjacent to this is a small projecting gable with the appearance of a transept identifying the Lady Altar, it has chamfered corners with carved corbels and stone kneelers above them, and a pair of cusped lancets at the centre in an arched stone surround. On the other side of the Lady Chapel are three triple-light stone windows lighting the choir, each topped with a cusped and depressed ogee. The final, narrow, bay at the east end of the chapel has a lower level group of three ogee-headed windows, the tallest in the middle, lighting the antechapel, and above it a larger window for the organ loft: two cusped lancets beneath a quatrefoil oculus in an arched stone surround.

The east elevation faces a small courtyard and features two lancet windows with paired daggers in the tracery at their heads, the southernmost window is cut off by a stair turret to the organ loft. A smaller window is placed below the northernmost lancet at the level of the antechapel.

Interior: The antechapel at the east end is separated from the choir by a carved oak screen with iron railings, on top of which is the organ loft and an iron balustrade. These and all the fittings described here were designed by Bentley himself. The choir comprises three bays with fitted stalls to the north, south and east, and free standing benches in the centre on parquet flooring. The oak stalls are of high quality and are fitted with hinged (uncarved) misericords and lobed projections on the arm rests. Above the seat backs fine oak wainscot panels cover the walls beneath projecting oak coving and continuous castellated beam running beneath the clerestory.

The sanctuary is raised up two steps and floored in stone inlaid with encaustic tiles. At the centre of the sanctuary is a limestone altar introduced after the liturgical reforms of the Second Vatican Council, behind which hangs a sanctuary lamp. The high altar, reredos and tabernacle are two further steps up. The altar is made of Hopton Wood stone and Lancashire marble with a frontal of opus sectile featuring seraphim holding scrolls amongst golden stars in a blue background. Behind and above it is an alabaster reredos with vertical panels of Greek Cipollino marble. At the centre of the reredos is the tabernacle, with a gothic canopy above it. To the north of the sanctuary, within an arched recess facing the transept, is the Lady Altar of oak with gothic detailing and a painted oak predella. Bentley designed this altar in 1901, after the completion of the chapel, and it was his final contribution to the convent.

Behind the high altar a passageway with a pulpitum above provides access to the bell turret. Within the bell turret a plaque of dedication records the names of the bell’s donors.

The transept is divided by an arcade of two chamfered arches supported by an octagonal column between them. The south side has two arched windows of three lights in Decorated Gothic tracery and a doorway to the sacristy with a moulded stone lintel. To the north there is a small clerestory of three sexfoil occuli. Beneath it to the left hand side is the lay entrance. To the right is an arched recess within which are the leaded glazed doors of the confessional, plain but unaltered inside. Seating in the transept comprises rows of unfixed oak benches on parquet flooring.

The sacristy retains its parquet floors, joinery, a window onto an enclosed courtyard and a small fireplace with a stone surround.

Throughout, the chapel has wagon vaulted timber roofs with white painted ribs, that to the sanctuary being the most complex with interlacing ribs and gold bosses, while the choir and transept have close parallel transverse ribs.

Subsidiary features: The chapel features a number of stained glass windows added after the completion of the building, many in dedication to individuals associated with the convent. The paired lancets above the high altar were dedicated in 1907 and show the Annunciation, representing the dedication of the convent, and further scenes of the Virgin Mary and Christ are shown in the north sanctuary window (by Shrigley and Hunt); the Lady Altar window shows St Elizabeth of Hungary and St Francis of Assisi (by Jones and Willis, around 1905), and four lights of the choir windows also have stained glass depictions of various saints and Christ as the Good Shepherd.

A community of the Missionary Franciscan Sisters of the Immaculate Conception, a contemplative order established in 1859, had been resident at premises in Portobello Road in London before moving to Bocking in the 1890s. At their earlier site they had already engaged John Francis Bentley on building works, and so he was commissioned again to design the new facilities required for their site in Bocking. The new convent incorporated an older C18 house and Bentley’s work included not only the addition of a chapel but also the refectory and other monastic quarters required by the Sisters.

The foundation stone of the chapel was laid on 26 March 1898 by Dean Angelo Lucas and building proceeded according to Bentley’s designs, with the completion of the project in May 1899. As originally conceived the chapel transept also served as the mission for a small lay community. The first Sisters experienced very little direct contact with outsiders and both the convent and chapel had separate access for lay persons.

In 1966 an Irish community of Missionary Franciscan Sisters of the Immaculate Conception (from a separate American foundation of 1873) joined the convent at Bocking, addressing a decline in numbers. The new community had a missionary focus that included a greater amount of interaction with the lay community. It was in this period (around 1960) that the innermost rows of choir stalls were removed and replaced by short benches facing the altar. Beyond the convent walls the Sisters formerly operated a nursing home and nursery on Convent Lane.

John Francis Bentley (1839-1902) was amongst the foremost architects of the latter half of the C19, despite designing only a few completed churches. He is particularly known for the design of buildings associated with the Roman Catholic Church in Britain, most notably Westminster Cathedral (Grade I, built 1895-1903, List entry 1066500). His work in Gothic and Byzantine styles influenced many that followed him, and epitomized the dedication to craftsmanship and the traditions of building that was at the core of the Arts and Crafts philosophy that developed in the latter part of his career. The attention to detail that characterises his architecture is also evident in the fixtures, fittings and furniture found in the execution of his interiors, the design of which first helped to establish Bentley’s reputation as a young man.

The Chapel of the Immaculate Conception at the Franciscan Convent, Bocking, constructed 1898-99 to the designs of John Francis Bentley is listed at Grade II for the following principal reasons:

Historic interest:
* a carefully developed plan form, illustrative of the division of the secular and cloistered religious communities that were served within the same building;
* as the work of John Francis Bentley, a highly significant architect of the late C19 who was also responsible for the design of Westminster Cathedral (Grade I, 1895-1903).

Architectural interest:
* for the high degree of survival of its interior fittings, including many of an especially high quality such as the Liturgical fittings of the sanctuary;
* a highly considered and finely detailed Gothic building externally and internally, a hallmark of Bentley's work.