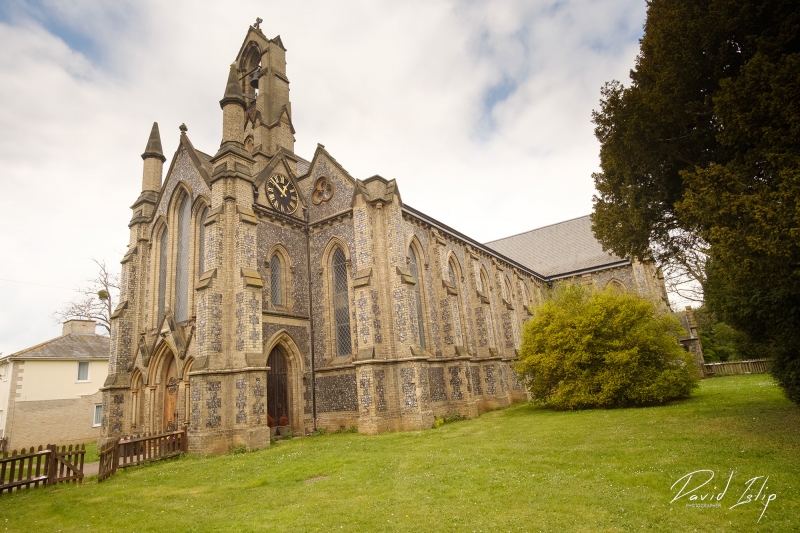 Church. 1841, by Brown of Norwich. Grey Gault brick and stone dressings,
with knapped flint panels and grey slate roof. Cruciform plan, with nave,
north and south aisles, Chancel and 2 Transepts. West and south porches.
Nave is of 6 bays of tall lancet windows, with drip moulds and head stops.
Between each window is a 3 stage buttress. Moulded string below cills.
Modillioned eaves, formerly parapetted. Same detailing returns along
east and west walls of the transepts. West front has full height decorative
porch with central doorway, flanked by 2 windows, with moulded 2 centred
arches, on attached columns with moulded bases and capitals. Each arch is
summounted by a moulded gable with finial. Above, the west window is of
3 lights with 2 centred arches, drip moulds and head stops. All surmounted
by a gable with a finial. Flanking buttresses in 4 stages, are surmounted
by octagonal finials with conical caps. North face of porch has a single
window matching those to the Nave, and south face has a doorway with
moulded 2 centred arch, and small window over. Parapet gables incorporating
clocks have been added to north and south. Aisles culminate in parapet
gables with moulded trefoil windows above a bracketted string and tall
windows matching Nave. Flanking buttresses in 3 stages with gabled caps.
Tall gabled and buttressed bell cote. North and south gable ends of
transepts have 3 light windows with 2 centred heads drip moulds and head
stops, 3 stage flanking buttresses with gabled caps. Late C19 gabled
porch added to south transept with 2 centred arch and grey slate roof. Chancel
was originally one bay, extended by a further bay, in late C19 and has 3
gables to east end. Central 3 light window, flanked by single light windows,
with buttresses between. Moulded string at cill level with grey brick below.
Early C20 single storey vestry added to east wall of north transept. Grey
brick with one large panel of knapped flint. Parapet wall and moulded string.
North door and window have Tudor arches with drip moulds. East window has
2 centred head.
(A Biographical Dictionary of British Architects 1600-1840; H Colvin.)