A Grade I Listed Building in Alphamstone, Essex 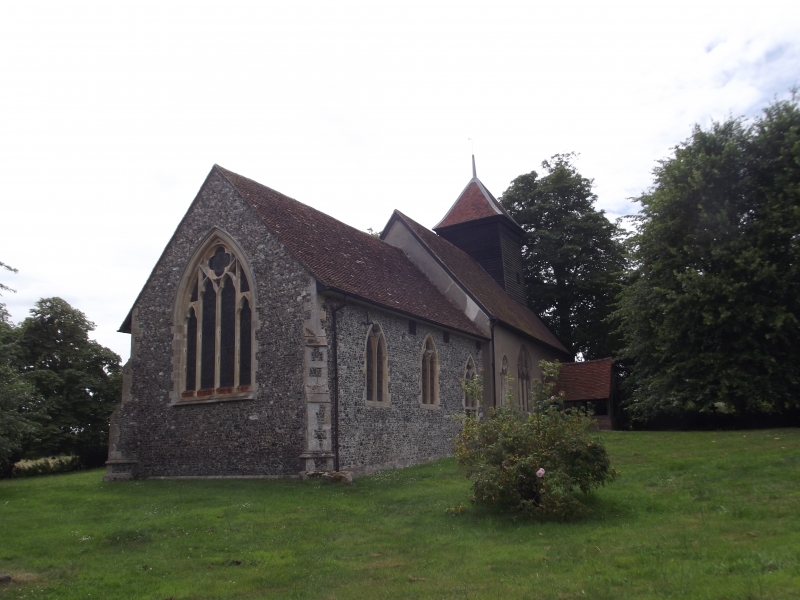 ALPHAMSTONE Parish Church of St
TL 83 NE Barnabas
2/1 (25/1)
GV I
Parish church. C12, altered in C14 and C16, and restored C19. Flint rubble, partly
plastered, and red brick, with dressings of limestone, roofed with handmade red clay
tiles and slates. S porch and spire timber framed, the latter weatherboarded. Nave
C12, W tower added at unknown date and later demolished, chancel rebuilt early C14, and
S wall altered C16. N porch C15, S proch of unknown date. Restored in C19 by Sir
Arthur Blomfield. The chancel, early C14, is faced on the N and E with dressed flint,
C19. E window mainly C19. In the N wall are 3 windows, the 2 eastern mainly C19
except the splays and rear-arches, c.1300. The western window is c.1300, restored, of
2 pointed lights with a quatrefoil in a 2-centred head; it is carried down below a
transom to form a low-side, fitted with wrought from grilles and rebated for shutters.
In the S wall are 2 windows; the eastern is C19 except the C14 splays and rear-arch;
the western is uniform with that opposite except that it retains one original or early
shutter, remounted. Between the windows is a C14 doorway with chamfered jambs and
segmental-pointed arch. The C14 chancel-arch is 2-centred, of 3 chamfered orders; the
semi-octagonal responds have moulded capitals and bases. The roof of the chancel has
plain tiebeams and king-posts of the C17. The nave has in the N wall 2 windows; the
eastern is early C14, of 2 trefoiled ogee lights with tracery in a 2-centred head
with moulded lable and wrought iron grille; the western window is C15, of 3 cinquefoiled
ogee lights with tracery in a 4-centred head with moulded label. Further W is a
blocked C12 round-headed window, visible internally. W of this window is the C13 N
doorway, probably reset, with chamfered jambs and 2-centred arch. The door is C14, of
V-edged boards on ledges, with strap-hinges inscribed with a diaper pattern. There is a
pierced scutcheon-plate with drop-handle, probably original, and latch with S-shaped
plate handle, C17. The early C14 S arcade is of 3 bays with 2-centred arches of 2
chamfered orders; the octagonal columns and semi-octagonal responds have moulded
capitals and bases. In the W wall is a C19 window, and to either side of it the
responds and springers of the demolished tower-arch. The roof of the nave is in 7
cants with rafters, collars and soulaces exposed, C15, and 2 later tiebeams. The S
aisle has an early C14 E window of 3 trefoiled ogee lights with reticulated tracery in
a 2-centred head. In the S wall are 3 windows, the 2 eastern C14, of 2 trefoiled lights
with tracery in a 2-centred head, with wrought iron grilles; the westernmost is C17,
with an oak frame and square head. Between the 2 western windows is the early C14 S
doorway, with chamfered jambs, 2-centred arch, moulded label and head-stops. The C15 N
porch is mainly timber framed, with later dwarf walls of brick. It is built in one
bay with a 2-centred outer arch, the sides formerly with moulded mullions, removed,
and at the inner end one cambered tiebeam with arch-braces. The roof is of collar-
rafter construction. The S porch is irregular, markedly out of line with the S
doorway, of plastered rubble repaired with brick, and of unknown date. It has a 4-
centred outer archway, weathered bargeboards, with a plain loop with timber lintel in
the E wall. The roof is of collar-rafter construction. Fittings. There are 3 bells,
the first and third from Bury foundry, c.1500, and inscribed 'Sancte Gorge Ora Pro Nobis'
and 'Sancte Maria Ora Pro Nobis': the second is by Austen Bracker, c.1550 inscribed
'In Honore Scaunte Marie'. There is a brass in the floor of the chancel to
Margaret Sidey, widow, 1607, inscription only. The font has a square bowl of Purbeck
marble, with 5 shallow round-headed panels on each side, late C12, with later stem. The
font cover is of oak, domed and panelled, with turned ball-finial with fretted supports,
C17. There is C15 glass, re-set, in the side windows of the chancel, fragements of
figures, suns and tabernacle work, and C14 glass, re-set, in the SE window of the S
aisle, borders of yellow fleurs-de-lys and cups on a black
ground. There is an early C14 locker in the N wall of the chancel, with moulded
jambs and trefoiled ogee head with finial. In the same wall is a C14 piscina
with mutilated moulded and cinquefoiled head, moulded label and octofoiled
drain, the jamb-shaft restored, and another with chamfered jambs and 2-centred
head, damaged quatrefoiled drain, C13, re-set. In range with the first are 3
sedilia with detached shafts with moulded bases and capitals, moulded and
cinquefoiled arches with moulded labels and horizontal string, early C14.