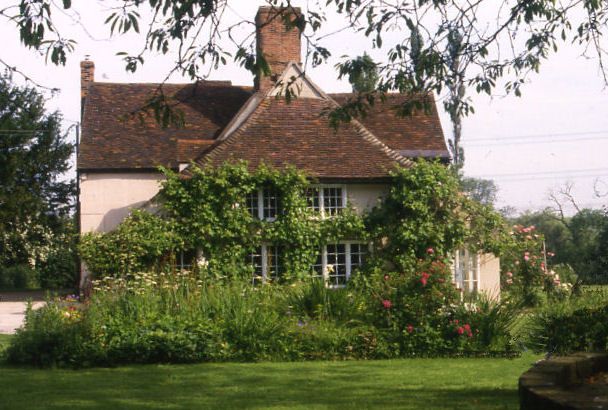 House of medieval origin, mainly C16, altered in C18. Timber framed, plastered
with some exposed framing, roofed with handmade red clay tiles. 4-bay main
range aligned NW-SE, with late C16 chimney stack in bay 3 from NW end. Early
C16 crosswing of 3 bays at NW end, jettied on the long (NW) side, with C18
chimney stack in middle bay. C17/18 NE extension near SE end of main range,
forming an F-plan. C17 stair tower to SW of main stack, and single-storey SW
extension with catslide roof. 2 storeys. NE elevation, 6-panel door with
rusticated jambs and architrave with triglyphs. 4 double-hung sash windows
of 12 lights, of which 3 are early C18, one late C18, and one C20 casement
window. First floor, 3 similar late C18 sash windows. On the NW elevation
the timber frame is exposed, with close studding and Suffolk bracing. The
interior of this NW wing has roll-moulded axial and transverse beams, and roll-
moulded joists of horizontal section. On both floors of the SW bay there is
early C18 pine panelling. The posts are jowled, and there is one long arched
brace to a cambered tiebeam. The crownpost roof has plain posts and arched
axial braces. On the first floor there is a mid-C19 iron grate. The NW part
of the hall range has 2 parallel longitudinal beams with single ogee moulding
and lamb's tongue stops. The room above has a hearth of plastered brick
with depressed arch and chamfered jambs, c.1570, and over this and the NW wall
there are contemporary paintings of honeysuckle, pinks and grapes in swirling
patterns. In the same room there is a blocked window of similar date with one
ovolo mullion. The roof was rebuilt in the late C17. The stair tower has a
late C17 staircase with turned balusters. The part of the hall range to the
SE of the main stack is medieval but much altered at ground floor level. The
rafters of the gablet roof are smoke-blackened at the apex, indicating the
former existence of a smoke vent from the former hall. The NW side of the
parition separating this from the rest of the main range is smoke-blackened,
indicating a smoke-bay or partially floored hall in this position. The late
C16 ground-floor hearth facing SE is 2.97 metres wide, with broach stops on
the mantel beam. RCHM 6.