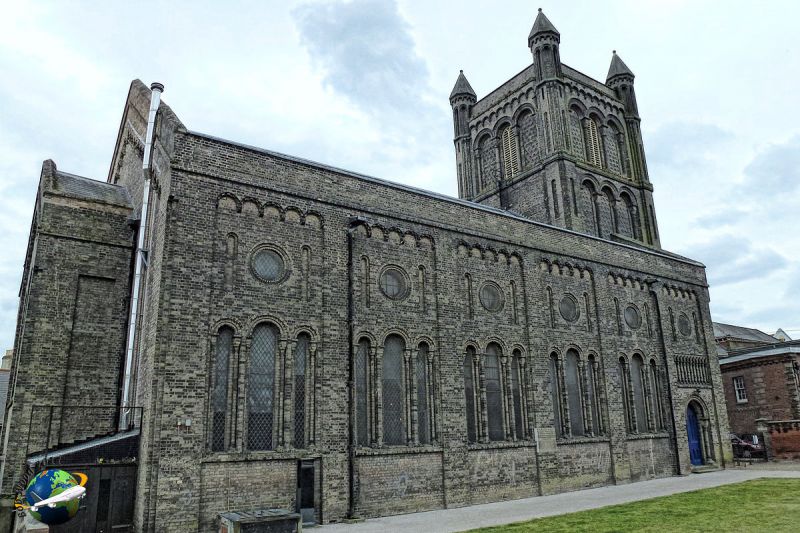 EXTERIOR: A powerful neo-Norman design, the cue for which no doubt came from the ruins of the Augustinian priory immediately to the north. The massive tower frames the end of the short St Botolph's Street. It has four stages. On the west face there is a large gabled west portal between a pair of turrets with pyramidal cappings. The doorway is of three orders with rolls in the arch-head and engaged shafts in the jambs. The two-leaf doors are ornamented with Norman decoration. The gable head is filled with scaly decoration. The second stage has blind intersecting arches; the third has three tall equal-height windows; and the top stage has three further arches, the outer ones with zig-zag decoration and the central one open and containing wooden louvres. The tower has clasping buttresses which have, on each face and in each stage, tall, narrow recesses. The buttresses turn octagonal in the top stage and enlarge into sturdy corner turrets with pointed cappings. Between the turrets are plain parapets.

The nave is of six bays divided by flat pilasters which rise to a Lombard decorative band, above which come plain, tall parapets. Within the five easterly bays there are, in the lower half of the walling, three round-arch windows, the central one of which is slightly broader and marginally higher than the flanking ones. The wall surface between these windows and the frieze are punctuated by an oculus with a moulded frame: either side of these are tall, narrow, blind recesses similar to those on the tower buttresses. The west bays of the nave serve as entrances and have wooden two-leaf doors with Norman decoration of the type found on the doors of the west portal. The doorway has one order of roll-moulded brick and one order of engaged shafts. Above the entrance there is a band of intersecting arches and then oculus-with-flanking-recesses as found in the more easterly bays. At the east end there is a shallow projection for the communion table. This has three windows in its east face the central one of which is, as in the nave side walls, larger than those on either side. The Lombard frieze is continued up the gables of the nave and communion table projection and also up the west ends of the aisles. To the south-east of the church the modern single-storey extension reinterprets devices from the 1830s building to achieve a sense of visual linkage.

INTERIOR: Although nearly all the C19 furnishings were removed in the 1970s the survival of the 1830s ceilings and galleries still convey a sense of the original building. The nave is covered by a semi-circular ceiling with flat ribs demarcating the bays and the ceilings over the galleries are groined. The galleries are supported by large iron columns with crudely detailed capitals. The columns are repeated in an upper tier to support the roofs. There are large round arches at the west end to the base of the tower, and to the eastern projection. The chancel area has a Victorian encaustic tiled floor.

PRINCIPAL FIXTURES: The most prominent feature is the three-sided gallery. It was removed from the east bays of the nave when the chancel was extended into this area in the C19. The gallery fronts have intersecting Norman arches mirroring similar work in brick on the exterior. The Victorian font has a hemispherical bowl set on a quatrefoil base. The east bay of the body of the chancel has delicate iron screens on both sides. The organ on the north side of the chancel is by J W Walker, 1890. At the south-east corner there is an elegant monument to William Hawkins (d 1843) with a fine, added neo-classical, near life-sized figure of Hope above, signed by J. Edwards of London, 1854. The glass in the east windows is good work by the Belgian maker, J B Capronnier, 1882-3. The window in the south aisle commemorating Archbishop Harsnett is by Powell and Sons, c1928.

HISTORY: By the 1830s the need for Anglican accommodation in Colchester became acute and in the application for funding to the Incorporated Church Building Society in March 1835 concern was expressed about 'the Parish Church being in ruins'. By December the same year the foundations had been begun and the new building, with its accommodation for 1080 people, was dedicated in 1837. The architect, William Mason (1810-97) was the son of an architect and builder, George Mason of Ipswich. William became a pupil of Edward Blore and practised for a few years in Ipswich before emigrating to New South Wales in 1838 and then to New Zealand where he had a successful career and became the colony's pioneer architect. The choice of Norman for the architecture may well have been prompted by the proximity of the priory ruins but it was a style that did enjoy widespread popularity from about 1835 to 1845 when Gothic became the style of choice for Anglican churches.
The church was radically reordered in the 1970s when the seating, iron chancel screen, and, most unfortunately, the rare cast-iron pulpit were removed. In 1990 the tower was divided from the nave by a partition to create a welcome area and provide hospitality facilities. The church today is noted for its strong musical tradition and is extensively used for music groups and concerts.

REASONS FOR DESIGNATION:
The Church of St Botolph, St Botolph's Street, Colchester, is designated at Grade II for the following principal reasons:
* It is of special interest as a late Georgian town church in a robust neo-Norman style
* It retains its original plan and most of the original galleries