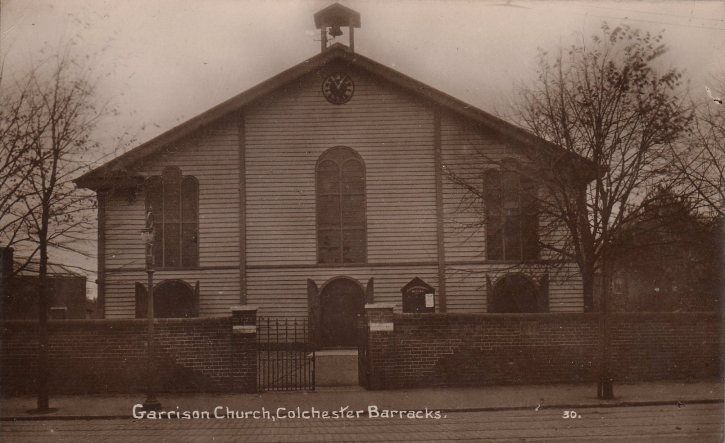 Garrison church. 1856. Timber frame with weatherboard. Rectangular aisled plan with vestries either side of East end.
EXTERIOR: single storey; 8-bay range. The frame is visible externally separating bays with triple round-arched windows with horizontal glazing bars, beneath deep eaves; the front gable has outer windows with taller central light, and central 2-1ight round-arched windows with two transoms, each above a round-arched doorway with double doors. Beneath the apex is a clock, with a small louvred bellcote on top. Plain gabled vestries to the East end.
INTERIOR: square timber nave posts and cast-iron brackets support iron trusses. HlSTORY: the only surviving part of the temporary hut camp established for the Crimean War. Comparable with the much later corrugated iron-clad timber church at Bisley, Hants and two contemporary examples at Aldershot, now demolished. Timber huts were widely used for barracks and hospitals in the early nineteenth century, but are now very rare. Graded for its considerable historic interest as the only barracks church of its type in the country.
(Dietz P: Garrison: Ten Military Towns: London: 1986-: 14).