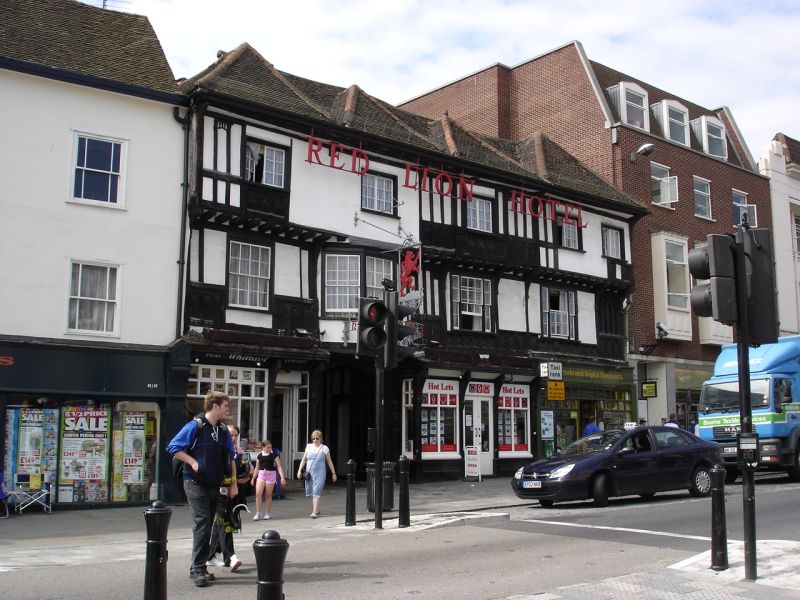 2.
An important and richly ornamented example of late C15 and early C16 work.
The original house was built circa 1470 and the remains of the hall
and screens can be seen in the ground floor dining room. Circa 1500
the house was turned into an inn and the main block on to the street
front was built, with a carriage entrance in the centre. This
block is of 3 storeys, the upper storeys and the eaves project and
the tiled roof has 4 C18 hipped gables. The 1st floor has been underbuilt
and there is a modern shop window at the west end of the ground floor.
The 1st floor is divided into bays by 8 shafts carrying the brackets to
support the projecting storey above and with carved capitals and
moulded bases; all the windows in this storey are C18-C19 sashes
(range of 4) but there are 2 blocked original window openings; covering
the wall face of this storey are 35 traceried panels. The upper storey
or 2nd floor has similar traceried panels between the stud work - 19 in
all - and similar shafts dividing the bays, and there is a moulded
bressumer to the eaves supported by curved brackets, some of them carved.
The carriage entrance to the courtyard has an archway with moulded posts,
4 centres arch in square head and carved spandrels, finely moulded roof
timbers. In the courtyard the wing on the west side has an upper storey
projecting with a fine moulded bressumer on curved brackets with shafts;
the east side has largely C18 and C19 features. There is a rain water head
dated 1716. Many original interior features, especially fine moulded
ceiling beams throughout the early C16 building, and a number of original
windows. The late C15 Part of the building has carved timber work.
There are cellars of circa 1400.