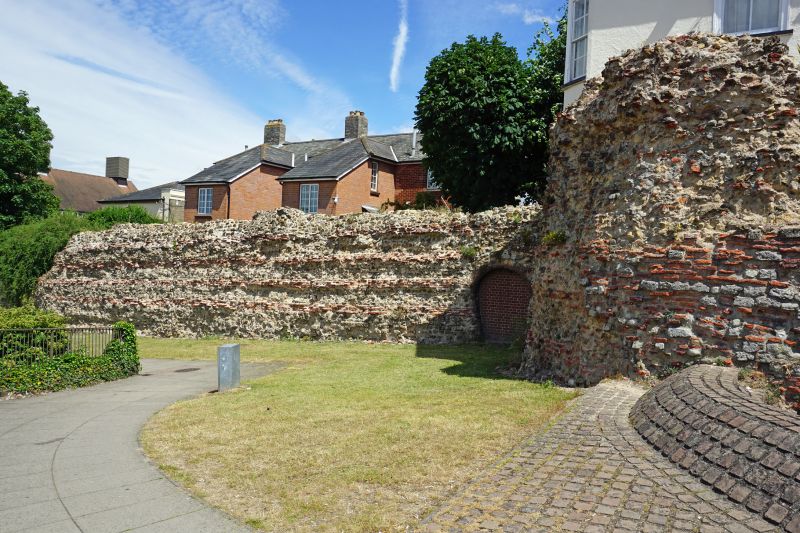 I
Probably of the late C3. Originally some 3,100 yards in length, forming a rectangle of about 1,000 yards east-west, and 510 yards north-south with rounded corners. Traceable throughout except in the south-west corner where it was much damaged by the 1648 siege. The three most important visible lengths are on Balkerne Hill on the west including the Balkerne Gate (qv), in the Castle Park on the north including the north-east Postern Gate and the great vaulted drain under, and the south-east corner in Priory Street. Built of layers of septaria, interspersed with four-fold course of brick, the lowest course going right through the wall, with a core of rubble and cement. Considerable lengths of the wall still reach a height of 15 ft, and it is on average 8 ft thick. The wall was strengthened in each corner and where it was met by the internal streets by an internal solid tower the base of one can be seen in the stretch on Balkerne Hill. The wall was extensively repaired during the reign of Richard II, 1389-1399 when it was strengthened by the addition of external semi-circular solid bastions, four of these remain in Priory Street. The wall was further considerably damaged in the 1648 siege, there is much brick patching in evidence in Priory Street, dating probably from the early C18.
There follows a detailed description of the wall's course and construction
commencing at the Balkerne Gate (qv) in the centre of the west side and
proceeding in a clockwise direction.

All measurements are approximate. All heights are of the outside face of the wall. The ground level on the inside is often considerably higher due to the bank of earth built as part of the fortifications.

A. Palkerne Gate to North Hill

Beginning at the Balkerne Gate (qv) the wall runs due north down the
east side of Balkerne Hill.

Approximately 280 yards of Roman wall running to the rear of the old "Coach and Horses Inn" on North Hill, 10 ft high dropping to 8 ft, with considerable mediaeval repairs, particularly in the north-west angle.

B. North Hill to East Hill

1,100 yards, condition fragmentary. 80 yards of Roman wall considerably altered. Beginning between No 30 North Hill and No 1 Middleborough. 10 ft high dropping to 3 and 4 ft in yard of No 1. Behind Nos 2 and 4 Northgate Street (Northgate House) 3 ft high; then fading at the rear of Nos 8, 10 and 12 Northgate Street to the corner of Short Cut Road.
260 yards, no visible remains.

The row of houses, Nos 22A-32 (even) Northgate Street are built on the course of the wall, it then runs beside or under the road to the corner of Castle Park. 40 yards with a footpath on top of remains, only modern facing visible.

15 yards to the park gate, 3 ft high, Roman with much modern facing.

Duncan's Gate (postern) with drain under and remains of fallen tower.

Modern arch through to Castle Road.

200 yards to Bastion V. Roman with extension repairs. Height varies between 12 and 8 ft.

60 yards to Bastion behind No 10 Short Wyre Street. Between Nos 1 and la St Botolph's Street and then behind Nos 1-10 (consec) Short Wyre Street. These houses have their rear walls built on the Roman wall, including the Bastion under No 10, but little remains of the original stonework.

225 yards from the Bastion to the Scheregate. Destroyed behind No 11 Short Wyre Street.

Roman, 10 ft high, to Scheregate behind Nos 5-1 (consec) Eld Lane and between No 1 Eld Lane and No 2 Scheregate Steps. Incorporated in the buildings, partly destroyed and partly invisible.

Between No 3 Scheregate Step and No 6A Sir Isaac's Walk, no visible remains.

20 yards beneath the car park. 6 ft high, but mostly rebuilt, some stonework.

Visible stonework behind No 6 Eld Lane.

Bottom garden wall behind Nos 36 to 48 (consec) St John's Street, running under the southern side of Eld Lane. Very fragmentary.

Running through buildings to Head Street. No visible remains, probably quite destroyed.

The following buildings are connected with, and have possible ownership of, various portions of the Roman Wall.

B. Buildings with possible invisible remains incorporated in the foundations: nothing certain.

C. Buildings not directly connected with the wall but it forms part of the property boundary.

The following of the foregoing buildings are of merit in themselves, and can be found listed under their respective streets.