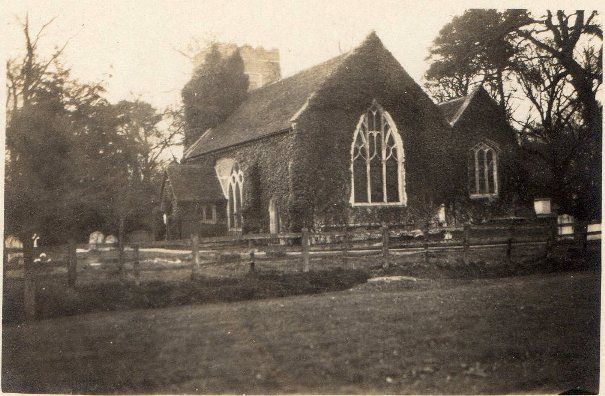 PLAN:
Nave and chancel in one, N chapel, S porch, and W tower.

EXTERIOR:
The W tower is of 3 stages and has a SE stair turret and embattled parapet. The W window is late C14, as is the W door. The bell chamber E and N windows are of c.1500, those to S and W are C14 reset.

Much of the exterior of the nave and chancel was rebuilt in the 1870's and has decorative stone banding. The division between nave and chancel is marked externally on the S by a buttress. The nave has a rest C14 S door, covered by a C19 porch. The Nave S windows are also C19, that to the E of the porch is very large in a geometric style. The N nave windows are also C19 in a Decorated style. The chancel E window has an acutely pointed head and Perpendicular tracery and dates to the early C17.
The N wall of the N (Audley) chapel was also rebuilt in the 1870's and has decorative stone banding. It has a large early C16 E window of three lights with brick tracery. In the W wall there is a C16 brick doorway with continuous mouldings and a hood mould. It has no N windows.

INTERIOR:
The nave, chancel and tower have been converted to office space. The N (Audley) chapel has a very fine C16 hammerbeam roof, heavily carved. The carving includes the emblems of Henry VIII and Catherine of Aragon, thus dating it to 1509-33. In the early C17, heraldic badges with the arms of Audley of Walden were added to the ends of the hammerbeams.

PRINCIPAL FIXTURES:
The Audley chapel contains a very fine set of monuments, the most notable of which is a very large monument to Sir Henry Audley, erected in1648 during his lifetime. A life sized white marble effigy in armour, reclining on a black and white chest with figures of his five children. Behind him is a large pedimented back-plate with a segmental pediment with a heraldic cartouche on pilasters, all possibly by Thomas Stanton (d.1674). Also a fine tablet to Robert Audley (d.1624), possibly by Gerald Christmas, with an hourglass and sculls.

Later memorials in the church include one to Charlotte White (d. 1845) of Berechurch Hall by Joseph Edwards and another to her grandfather Sir Robert Smyth, d.1802, an urn within a classical frame. Also Nicholas Tomlinson d.1847 and wife Elizabeth d. 1839, an elaborate Gothic frame by J Browne, and two monuments by George Lufkin of Colchester.

SUBSIDIARY FEATURES:
Some monuments remain in the courtyard, including a chest tomb for the Ward and Tomlinson families that commemorates, among others, James Ward d. 1806 who sailed with Captain Cook and is said to have been the first to see the Hawaiian Islands, and his brother-in-law Vice-Admiral Nicolas Tomlinson d.1847.

HISTORY:
The church probably has C11 or earlier origins, but was always a chapel of Holy Trinity, Colchester. The tower is C14 and there are some reset C14 windows, probably from a reworking at that date of an earlier church. The N (Audley) chapel was added in the early C16, perhaps in the late 1520s or early 1530s but certainly before 1533. It is likely that other work was also done to the church at this time. In 1536 Sir Thomas Audley was licensed to create a separate rectory at Berechurch, and it may be he who was responsible for the construction of the N chapel a few years earlier. Audley, who was Lord Chancellor, entertained Henry VIII at Berechurch in the 1530s and it is possible that the chapel was built around this time. There was further work in the early C17, when heraldic cartouches with the arms of Audley of Walden were added to the chapel roof and the chancel E window was redone. The manor house was damaged during the Civil War and repairs to the church may have been carried out in the late 1640s at the same time that Sir Henry Audley erected his own monument. The church was almost entirely rebuilt, except for the tower and parts of the Audley chapel, in 1872 to designs by Charles Pertwee, although some earlier features were reused. The S porch was added in 1878. After the church became redundant in 1975, the nave and chancel were converted to office space. The parish remained largely agricultural throughout the C19 and early C20, but after WWII large new housing estates were developed as suburbs of Colchester. The old church became too small, and a new church of St Margaret was built nearby in 1968-72. The parish moved to that church in 1973. St Michael's was formally made redundant shortly thereafter, and the main church building sold, but the Audley chapel was vested in the Churches Conservation Trust in 1981.

REASONS FOR DESIGNATION
The church of St Michael, Colchester is designated at Grade II* for the following principal reasons:
* Medieval church with C14 tower, C14 windows and C16 chapel, heavily restored in the C19.
* Very fine early C16 memorial chapel for the Audley family, with an outstanding C16 hammerbeam roof and many very good monuments.
* Interesting C17 Gothic Survival chancel E window.
* Interior of nave and chancel have been converted to office use but retain some good C19 monuments.