A Grade I Listed Building in St James, Essex 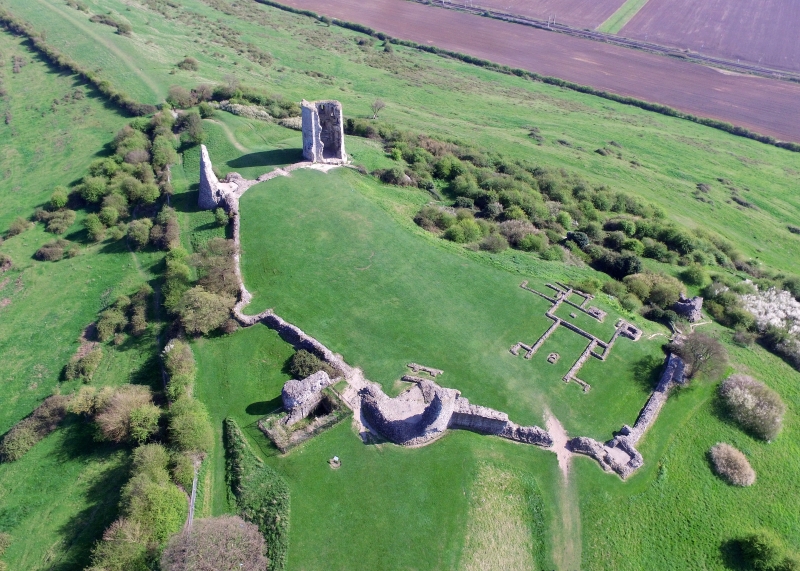 Ruins of castle rebuilt by Edward III mid-Late C14 on the site of a castle
built by Hubert de Burgh early C13. Reigate stone, ragstone some rubble and
tiles, much cockle shell in mortar. Built on a spur overlooking the Thames
estuary most of the southern features have slipped to a lower level. Only the
foundations or bases of the curtain wall remain between the 8 towers, most of
which are low in height. The 3 western towers of square plan, the others
circular. To the south and east of the north west square and circular high
towers are foundations of kitchen buildings, a hall and solar and a C16 lead
melting hearth. The Barbican adjoins the 3 storey High Tower to the west. Low
level north tower. The north east tower outer walls are of 3 storeys, with
plinth and band of panelled stone and knapped flint over, 2 small square headed
windows to ground and first floors and part of a similar window to upper storey,
part of a flue to inner wall. South east tower of 3 storeys, with only the
western face demolished. Plinth. Knapped flint band over. Each floor with 3
square headed variously spaced windows visible externally. Holes for bars
visible. Various putlog holes. Within the south west wall is a garderobe, with
chutes discharging externally onto the plinth through 3 square headed openings
with sloped cills. 2 flues to north. The south side of the bailey has slipped
downhill, but remains of the south and south west towers can be identified. Wall
bases of former residential buildings lie between these 2 towers. Low level
remains of west tower. The castle is of exceptional interest, being the only
work of its type in the country. There is documentary evidence of the progress
of the work in 1365-6. Essex Archaeological Society Transactions. N.S. 1, 86 et
sq. S.A.M. RCHM 2.