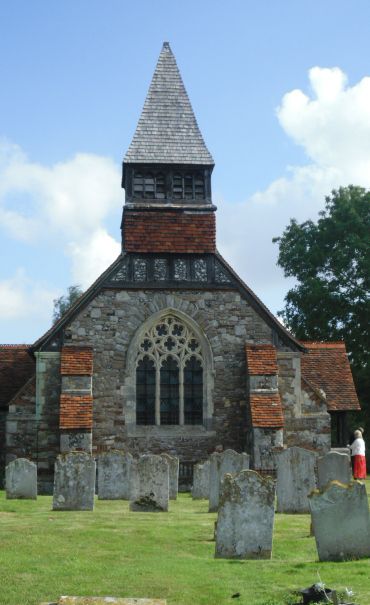 EXTERIOR: The nave and chancel roofs continue at the same height, the demarcation between these two parts being a slight narrowing of the chancel. The use of a wide variety of building materials; flint, red brick and stone rubble of various hues, creates a striking and picturesque effect. A few reused fragments with Norman zig-zag decoration can be discerned. Apart from his use of materials, Chancellor's work is distinguished by his fenestration, especially in the side walls where, over all except the NW and SW single-light openings, he introduced a pretty band of carved decoration along the top of the square heads. The E wall is broken by a pair of two-light Geometrical windows. At the W end the three-light window has florid geometrical tracery. Over the W gable there is a large bellcote, tile-hung in its lowest part, then with a louvred timber stage and finally capped by a shingled, pyramidal spirelet. The porch has a timber superstructure resting on a stone plinth.

INTERIOR: The walls are plastered and whitened throughout. A distinctive feature of the square-headed windows is the way the mullions are doubled inside, so creating an arcaded effect. The chancel arch is double-chamfered and has demi-octagonal responds and moulded caps and bases. Over the nave is a plain, six-sided roof. The chancel roof is also six-sided, but unlike the nave, it is boarded horizontally and divided into panels by moulded ribs. At the W end there is an arch-braced tie-beam with queen-posts supporting the bell-turret.

PRINCIPAL FIXTURES: The medieval font survives with an octagonal, slightly tapering font: it probably dates from the C15 and has simple carvings of a saltaire cross and a serpent on its bowl. A roughly-hewn square bowl at the W end seems most unlikely to have been a font. At the SE corner of the nave is a piscina. Opposite this is the late C19 carved stone pulpit with blind panels of ogee-headed arches and below a frieze with triskele ornamentation. The pewing scheme is largely intact and has plain L-shaped ends. Some of the chancel stalls and a reading desk remain. Between the chancel and vestry is a Perpendicular-style stone screen with a doorway and four one-light glazed divisions. The RCHME recorded a monumental brass to Sir Arthur Harris d.1651.

HISTORY: This church replaced an earlier, C14 building which also comprised a nave, chancel and low W tower. The architect for the rebuilding, Frederic Chancellor (1825-1918), was a successful provincial architect based in Chelmsford where he began independent practice in 1846. He was mayor of Chelmsford seven times from 1888. He undertook many new churches and church restorations. At All Saints' church he seems to have broadly adopted the character of the previous building but with extra and attractive flourishes.

REASONS FOR DESIGNATION:
The church of All Saints, Burnham on Crouch, is designated at Grade II for the following principal reasons:
* It is a picturesque Victorian rebuilding by a well-known local architect who added a number of attractive details.
* Chancellor's rebuilding strove to re-use earlier fabric and (externally at least) to recreate the spirit of the earlier church: such sensitivity is characteristic of the nest of late C19 restoration.
* The C19 fittings are largely intact and the medieval font survives from the previous building.