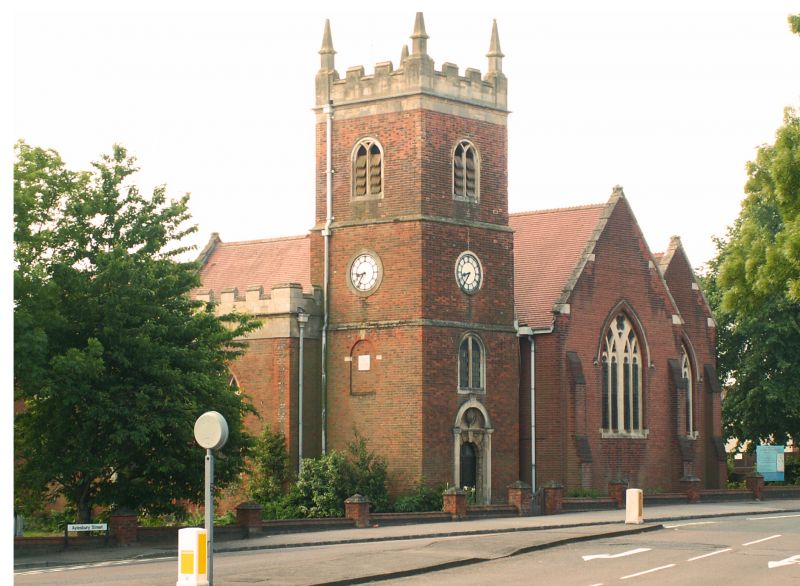 II*
DATES/ARCHITECTS:
The present N aisle and tower were built 1724-30 to designs by Edward Wing and John Simmonds. A S aisle of equal size was added in 1823 by Charles Squirhill, but this was demolished and replaced in 1865-6 by William White. White made the C18 church into the N aisle, and added a larger nave, chancel, and NE organ chamber and vestry complex to its S. A S aisle and SE chapel were added to White¿s work in 1907-8 to designs by John Chadwick. Parish rooms complex added to S in late C20, and some reordering also took place in the mid and late C20.

EXTERIOR
Visually, the exterior is in two parts. The present N aisle and tower are the original church erected by Browne Willis in the early C18, and are an important early example of the Gothic revival, though retaining many classical elements. The 3-bay N front is symmetrical with a round-headed doorway with architrave, archivolt and keystone in the centre, flanked by two windows with pointed heads. They have cusped intersecting tracery, a C19 addition that probably replaced plain intersecting tracery like that in the tower and blocked E window (visible internally). There is a stone frieze and embattled parapet, an arrangement repeated on the tower. The tower has a W door with an architrave similar to that on the N, a rusticated inner surround, and a datestone of 1726. There is a two light window above the door, round clockfaces in the second stage, and two-light Y-tracery bell openings in the upper stage. The 1865-6 nave and chancel, and the 1907-8 S aisle built to match, are in a conventional Victorian High Gothic style. The windows have intersecting tracery with plate tracery cusping, that in the E window more elaborate. The S aisle windows may be the nave S windows of 1865-6 reset in the early C20.

INTERIOR
The interior, like the exterior, is notable for the mix of early C18 and Victorian Gothic Revival styles. The N aisle, which represents the original church, retains its C18, flat, panelled ceiling decorated with the coats of arms of the donors. Other decoration on the cornice has been lost. The former E window of the C18 church is visible behind an arch to the former organ chamber, now vestry, at the E end of the aisle. William White's nave and chancel of 1865-6 has forceful brick polychromy in red, white and black. The patterns include chevrons, lozenges, diamonds, stars and herringbone; there are crosses on either side of the chancel arch. There is further stencilled decoration of small flowers, leaves and other motifs on the arches and chancel walls. The C18 nave was formerly painted to match, but this has been painted out. The 3 bay N arcade is in an Early English style and has square, foliate capitals on round piers with brick arches of two orders. There are no E responds and the arches die into the walls. The chancel arch is set on short shafts on conical corbels, and there is a large squint in the SE respond. The arch to the N chancel chapel is on foliate corbels. The S aisle and S chapel by Chadwick of 1907-8 copy White's design, including the pier forms and the polychromy, but the S arcade has 4 bays, and the carving on the capitals is subtly different.

PRINCIPAL FIXTURES
The NW aisle window has late C16 and C17 stained armorial glass of local families including the Stonors, Bolyens and Fortesques, collected by Browne Willis, as well as royal and episcopal arms, and the arms of major donors to the church of c.1730. It was formerly in the E window of the C18 church. Two large C18 panel paintings of angels on the W wall of the nave. Monument to Browne Willis, d. 1760 at Whaddon, in the N aisle.

Polygonal C19 font in an Early English-influenced style with foliate brackets supporting the bowl and a tall, Classicising two-tier cover with a polygonal spire. C19 or early C20 chancel screen. The church was refurnished c.1950, and the pulpit, altar rails, organ case and choir stalls at the rear of the church are all of this date, with a very late use of Arts and Crafts Gothic tracery motifs. The traceried timber altar frontal may also be of this date.

Fine C18 ceiling in N aisle, flat, panelled and painted with the arms of donors to the church. The chancel roof has false hammerbeams and a canopy of honour over the E bay. Arch-braced crown post nave roof, and panelled wagon roof in S aisle.

HISTORY
St Martin, Fenny Stratford replaced a small chapel dedicated to St Margaret, dependant on the much larger church in nearby Bletchley. The earlier chapel was medieval in origin, and was wholly rebuilt in late C16. It was destroyed in the Civil War and apparently not rebuilt. The site was purchased and the present church of St Martin was built on its site between 1726-30 under the patronage of local landowner Browne Willis. His choice of a Gothic style was probably a deliberate statement of High Anglicanism in the face of significant non-Conformity in the parish. The initial builder/designer, Edward Wing, also built Aynho (Northamptonshire) church, but he was dismissed in 1728 and replaced by John Simmonds, about whom little is known. The money for part of the project was raised by subscription from local gentry and Oxford and Cambridge colleges; the donors were commemorated in the ceiling and in the glass. In response to the growth in population in Fenny Stratford in the early C19, the church was doubled in size in 1823 with the addition of a S aisle/nave to designs by Charles Squirhill, another Northamptonshire architect, who rebuilt Abington (Northamptonshire) church around the same time. Drawings show his addition to have been similar in style to the C18 church, with a Classical style 3-bay arcade between the two parts of the building, a SW gallery and triple-decker pulpit. This was demolished and replaced by the present nave, chancel and N chapel in 1865-6 to designs by William White (1825-1900). White, born in Northamptonshire, was a leading proponent of the Victorian High Gothic style and in particular is noted for his use of decorate brick polychromy of the sort used in St Martin's; this is best seen at Lyndhurst, Hampshire (1858-69). The church was further expanded with the addition of a S aisle in 1907-8 by John Chadwick, the Surveyor to the local Urban District Council, copying White's design in most of its details. The C18 N aisle ceiling collapsed in 1957 following water damage with the loss of the heraldry on the cornice.

REASONS FOR DESIGNATION
The church of St Martin, Fenny Stratford, is designated at Grade II* for the following principal reasons:
* The N aisle and W tower of 1726-30 are in an unusually early use of Gothic Revival style, and retain the C18 panelled ceiling.
* Historic interest of Browne Willis' early C18 rebuilding, and its associated fittings, especially the heraldic glass.
* The nave and chancel added 1865-6 by William White are an excellent use of his characteristic polychromatic style, and form a striking contrast with the earlier fabric.
* S aisle by John Chadwick of 1907-8, carefully copies White's designs.