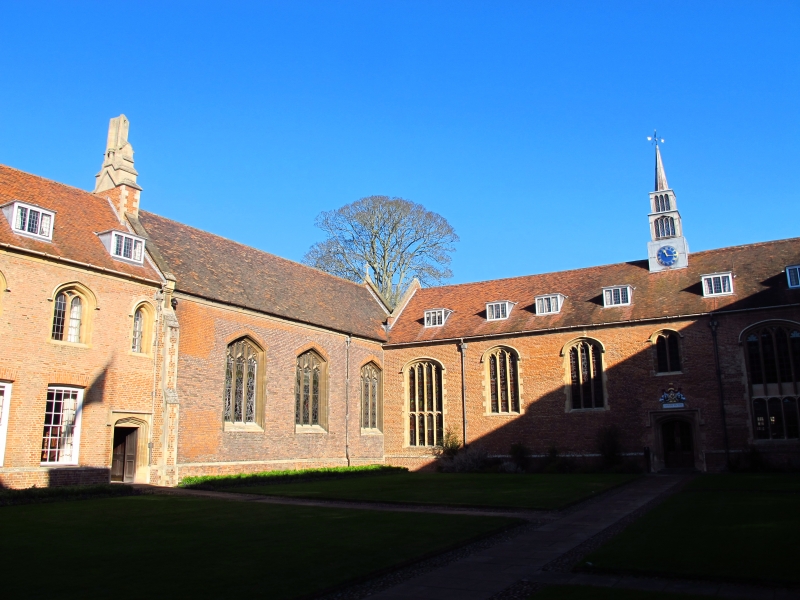 MAGDALENE COLLEGE
1.
942
The Buildings
surrounding First Court
TL 4458 NE 3/272
TL 4459 15/272 26.4.50.
I
2.
West Range completed circa 1575 but probably begun much earlier. The street
front entirely refaced with red brick and freestone dressings in 1875.
Two storeys with attics. The West arch of the main gateway is circa 1585
with a Roman Doric surround. The fenestration of the West front is unaltered
from circa 1690. The interior has one room with panelling of circa 1600,
and a number of C18 fittings.
North Range, including the Chapel. Late C15, much altered, and refaced
in the C19. The Chapel was altered to the Classical style between 1733
and 1756 by Jeremiah Robinson, then restored circa 1850 when most of the
C18 features were removed. The eight-bay roof is original. Glass designed
by Pugin. Gothic panelling, screen and stalls 1847-51. Paving of 1755.
Tile Library contains the 1756 reredos from the Chapel. The windows have
late Cl5 and late C16 heraldic glass. The range also contains some C17
and C18 panelling and four pilasters from the English Church of St Mary
at Rotterdam (see also Selwyn College.).
East Range. The Hall was built in 1519, wainscoted, in 1585 and completely
altered internally in 1714. The lantern on the roof is circa 1815. The
seven bay roof is original; the ceiling is 1714 altered in 1911. The fine
double staircase and gallery and the screen are all 1714 features though
re-using older materials. The glass is mostly C19 and C20. The screens
passage is lined with C18 panelling. The Small Combination Room has panelling
of circa 1600, originally in No 25 Magdalene Street (q.v.).
South Range Built at different times in the late C15, partly rebuilt in
C16 and altered in the C18. Red brick partly cement faced. The windows
have been mostly renewed. The South front was restored by F C Penrose
in 1873. The interior has been greatly modernized but retains in part
the original arrangement of rooms. (RCHM.)