Jesus College, the Buildings Surrounding Cloister and Outer Courts, and the East Range of Pump Court (Excluding the North Range of Outer Court) 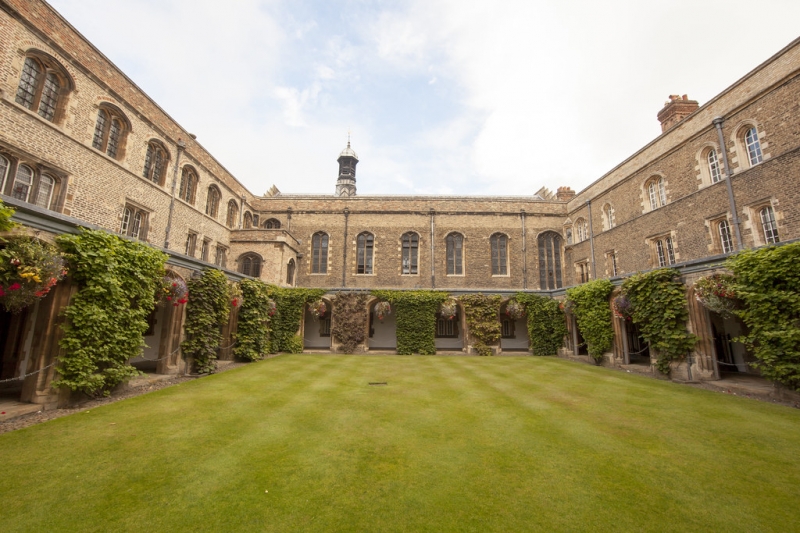 JESUS COLLEGE
1.
942
The Buildings surrounding
Cloister and Outer Courts,
and the East Range of Pump
Court (excluding the North
Range of Outer Court).
TL 4558 NW 4/264 26.4.50.
I
2.
Outer Court
South Range with Gatetower circa 1500 with alterations in 1880. Red brick
with stone dressings. Late C19 timber panelled ceiling in gatehall. The
room above has mid-C18 fielded panelling. The rest of the range is 1503-7,
third storey added 1718, redesigned after a fire in 1951. Many C18 internal
features on lower floors.
Cloister Court with Chapel On the site of the Nuns' Cloister. The external
walls of the walks were rebuilt with 4-centred arches 1762-5. Fine timber
roofs circa 1500. The Chapel is the oldest part of the College buildings,
dating from the C12 and C13. It has been almost entirely refaced in the
C19 and C20. Restored by Augustus Welby Northmore Pugin 1846-9. The tower has 3 stages, the top one of circa 1500 with a C19 embattled parapet. The Chancel roof of 1847-9 was designed by Pugin; the other roofs are of circa 1500 but restored
by Pugin, those of the crossing have paintings by the Morris firm. Glass,
lectern and communion table all designed by Pugin 1847-9. Organ by John
Sutton 1847. Screen and stalls both by Pugin 1847-9. Fine carved bench
ends of circa 1500.
East Range Some C13 external features but mainly covered or altered in
later centuries. The interior has beams and partitions of circa 1500;
also a staircase and some doors. The Combination Room has panelling of
1762 by James Essex, and there are a number of other features from the
C17 and C18.
North Range C13, with rebuilding circa 1500, and much later alterations,
a number of circa 1500 features survive, mostly in the form of blocked
doors and windows. 2 storeys, mainly red brick. The interior of the range
contains the Hall and the Buttery. The Hall is of 6 bays and has an oriel
window of circa 1500 and a screen and wainscoting of 1703. The oriel was
restored by Waterhouse in 1871; the other windows are also circa 1500.
The roof is circa 1500 with a cupola of 1709. There is some C16 and C17
heraldic glass.
West Range C13 rebuilding circa 1500. 2 storeys brick, part plastered.
Also with a number of original features either blocked or concealed entirely.
The interior of the range contains the Kitchen, Pantry and Old Library.
The Kitchen and Pantry have been modernised. The Library is of 7 bays
with a roof of circa 1500. The room was refitted 1663-79 and the bookcases
date from that time. There is also interesting glass and a C17 doorcase.
The Master's Lodge This occupies part of the South and West ranges of
Cloister Court. Of very varied dates from C13 onward. 3 storeys, brick.
Re-modelled by R H Carpenter in 1886 after alterations in 1718-20. There
are many concealed medieval features. The interior has an C18 staircase
and some re-set panelling, the Conference Chamber has pine panelling from
circa 1600 and a fine fireplace. The West wing contains some C18 panelling.
East Range of Pump Court 1822. By James Webster. White brick with stone
dressings, slate roof. Symmetrical design, largely unaltered both outside
and in the interior. (RCHM).