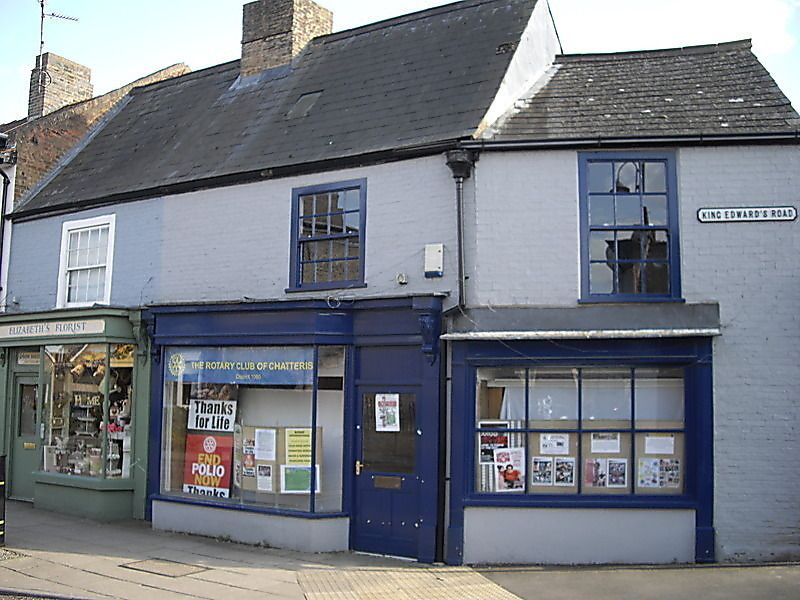 House, erected in the C18 and converted to two shops in the mid C19. Built of brick, now colour washed, it has a slate covered, gabled roof on two levels, with a central brick ridge stack, truncated.

PLAN: The street front range is rectangular in plan with ranges to both No. 12 and No. 14 extending from the rear.

EXTERIOR:
The main elevation is two storeys high and of two bays with a further short bay adjoining at an angle, standing on King Edward's Road. The upper floor is lit by early/mid C19 hung sash windows with moulded architraves, 8 over 8 on High Street and 6 over 6 on King Edward's Road. The sashes are not horned, save that to the left which has later sashes within an earlier architrave. At ground-floor level there are two mid C19 shop fronts with foliate console brackets above plain piers. They have modern doors and large plate glass windows. To the right there is a large, mid/late C19, 8 over 8 shop window. To the rear is an early C19, reeded window frame, probably with later, 8 over 8, glazing bars.

INTERIOR:
No. 14 has been opened up at ground-floor level such that few interior fittings of historic interest survive in the main body. However, in an addition to the rear a mid C19 cast-iron fireplace survives and C19 door with small-pane lights.

At the upper level no fireplaces survive and a partition separates the High Street element of No. 14 from the added bay on King Edward's Rd. On the line of the partition there are boxed in attic stairs which give access to the roof over the High Street section of no. 14. The door into the boxed-in, attic stairs has C18, H hinges and a sprung latch. These may be reused, as the stair could have been reconfigured when the King Edward's Road bay was added in the C19 or when the property was divided. Nevertheless, their presence is some indication that the building has C18 origins as suggested in the 1983 listing.

Interior of No. 12 not inspected.

HISTORY:
Chatteris is a small town on the western border of the Isle of Ely. Given that Nos. 12 and 14 High Street have mid C19 shop fronts, it is interesting to note that the market, having been discontinued some time before 1808, was revived again in 1834. By 1851 it was well attended and the centre of a fair trade in corn, coinciding with a conversion of the surrounding countryside from pasture to tillage. In 1851 the town was gas-lit and was said to contain some handsome houses and good shops. Although it acquired some small industries, Chatteris' importance is as an agricultural and shopping centre.

Nos. 12-14 High Street was erected as a single property in the C18. Close to the market place and the church, it is in a prominent location and was converted to two shops in the mid C19. Map evidence indicates that No. 12 was extended to the rear between 1888 and 1902.

The building is designated at grade II for the following principal reasons:

* The building dates from the C18.
* The C19 façade of sashes and shop fronts has survived largely intact
* The building has group value with listed buildings possessing C19 shop fronts at Nos. 8 and 8A High Street