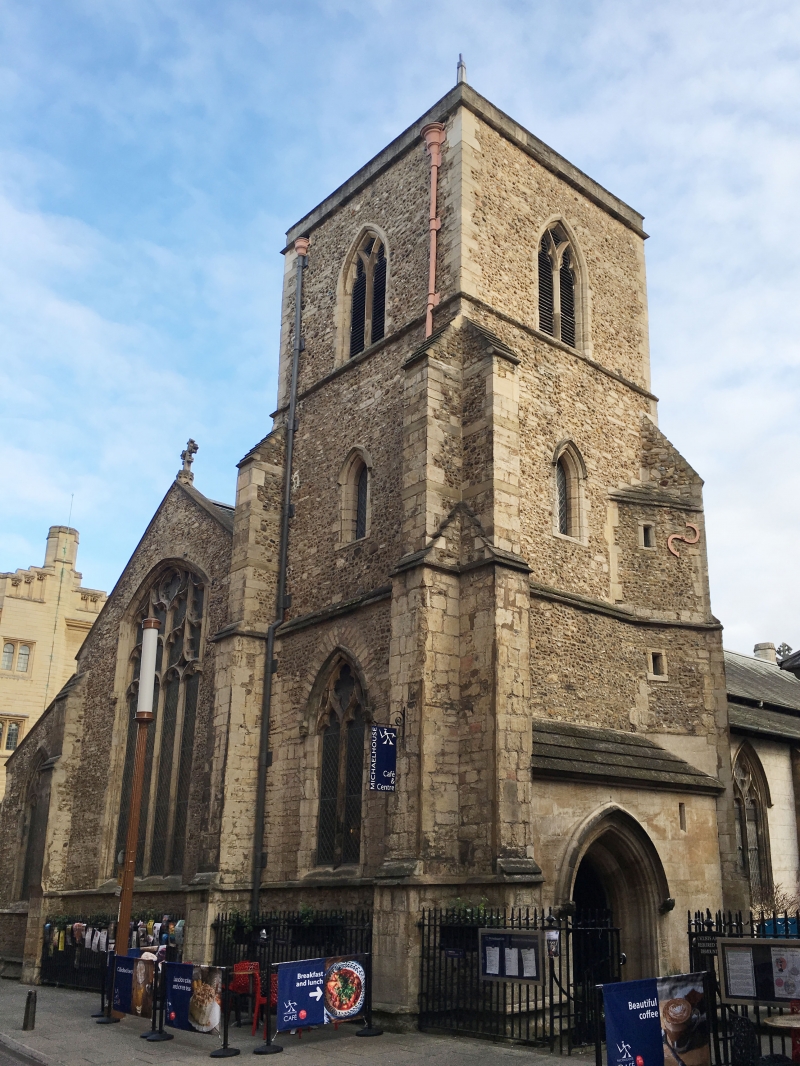 There was apparently a church here in the C12, but it was wholly rebuilt in the late 1320s by Hervey de Stanton for his new foundation of Michael House, a precursor of Trinity College. There is excellent documentary evidence for the rebuilding work. It remained almost entirely unaltered until 1818 when the spire was taken down and the roofs slated. It was restored by Gilbert Scott in 1849-50 after a fire, who also rebuilt the N porch. There was further work to refurnishing the chancel in 1868-74 to designs by George Gilbert Scott, junior. Work to convert it to a multi use space was completed in 2002 to designs by Shona Mackay, and includes a glazed partition between nave and chancel and an inserted gallery and service spaces in the nave.

MATERIALS: Rubble with dressings of Barnack and other limestone, partly rendered and blocked out; slate roofs. The early C21 conversion insertions are of timber, glass and steel.

PLAN: The building is an aisled rectangle of five unequal bays with a tower over the W bay of the S aisle a vestry in the E bay of the N aisle, and a projecting N porch. As it was designed as a college chapel, the chancel is larger (3 bays) than the 2 bay nave. The conversion closed off the chancel and E end of the S chapel for worship, introduced a gallery into the N aisle (staircase in the nave), offices and kitchen into the N chapel, and converted the rest to a multi-use café and arts space.

EXTERIOR: The exterior detailing is wholly C14 in style, restored in places. The W end fronts Trinity Street and has an irregular stepped massing rising from the N aisle across the nave to the SW tower. The nave W window is particularly fine and has branching ogee tracery creating zig-zag reticulation. The E end stands within the grounds of Trinity College. The chancel has a 5-light Decorated E window, and there are two- and three-light Decorated windows with flowing tracery in the chapels, aisles and former vestry. The E window of the N aisle is blocked. There is a small, mid C19 door in the S chapel and another C19 door in the S side of the SW tower, with a plain late C20 door in the N aisle. The N porch is also C19, rebuilt by Scott, but the N door is C14. The SW tower is of three stages and has angle and diagonal buttresses, with a SE stair turret and a plain parapet. The tower W window is similar to those in the S aisle.

INTERIOR: Following its conversion to a multi-use space, the interior now reads as two separate spaces: the western cafe and art space, and the eastern religious space, separated by a large glazed timber screen, although this does not detract from its architectural and historical interest. Like the outside, the interior detailing (with the exception of the most recent work) is wholly Decorated in style. As the conversion is largely reversible, and the building is mostly still legible through it, the medieval and C21 work are discussed separately.

The chancel arch is double chamfered and has octagonal responds with moulded capitals. The arcades to the chancel chapels are of two bays and have three chamfered orders, the middle hollow chamfered, on octagonal piers with moulded capitals and bases. The eastern bay on each side of the chancel is walled in. On the N is a C14 door to the former vestry. On the S is a 4-bay sedilia and piscina pierced by a squint to the S chapel and just to the W of it a very richly carved ogee-headed doorway. The S chapel has very fine C14 statue niches, possibly slightly later than the rest of the building, on either side of its E window.

There are C19 arches between the aisles and chapels. The nave arcades are similar to the chancel arcades. There are two bays on the N and a single bay on the S. The western bay on the S forms the S tower arch, which, like that to the E is of three continuous orders. The nave and chancel roofs have short king-posts and, although heavily restored following a fire in 1849, may retain some C14 timbers.

Following the conversion, the chancel arcades are blocked behind the stalls and the chancel arch is closed by a large, glazed timber screen. The gallery is accessed by a timber and steel spiral staircase. The inner faces of the nave and aisle walls are covered by screens.

PRINCIPAL FIXTURES: The worship areas have very fine medieval and C19 fittings. The C14 chancel piscina and 3-seat sedilia are formed of four stepped niches, separated by shafts, with crocketted ogee heads. A fragment of a carved stone screen in the chancel S arcade screen is similar, and has an ogee headed doorway with a crocketted surround on both sides and an embattled cornice. The remains of another doorway are visible on the W end. This may be a part of the C14 chancel screen reset at a later date. There is a plainer, C14 piscina with a foiled head in the S chapel and another in the N vestry. The statue niches flanking the E window in the S chapel are very richly carved and have ogee heads with square frames with carved spandrels of a different, later character to the rest of the building. They sit awkwardly against the jambs of the E window and may be additions of the later C14.

The choir stalls, 36 in total, return across the W end of the chapel, and have shaped tops and arm rests. The misericords are mostly plain, but some have figural carving. They were made by John Say, carvar (sic) in 1481 for King's Hall, and were a gift of the Queen, Elizabeth Woodville. They were moved to St Michael's c.1550.

The E end of the chancel was refitted in the C19, and the C19 reredos is particularly notable. Richly painted, stenciled and carved, it is in two tiers of cusped panels with an elaborate cornice. The upper tier has a central relief of the Last Supper flanked by statues of angels on pedestals. The lower tier has panels with painted Evangelist symbols and other decoration. It was designed by George Gilbert Scott, Junior in 1868. The carving is by Michael Abeloos, who also worked with Scott on the choir stalls at Ely, and the painted decoration was done by Fredrick Leach. Leach also carried out the stencilled decoration on the chancel ceiling, above the chancel arch and on the chancel arches and piers. The work on the piers now survives only in the ladies lavatories in the N aisle, but the ceiling was restored c.2007. The chancel piscina and sedilia were also recoloured in the C19, and there are fine C19 geometric tiles in the chancel installed by Scott, Jnr. The E window glass is by Hardman of 1872 as a memorial for the former vicar, William Beaumont, d.1868.

There are some C17, C18 and C19 wall and floor slabs in the chancel, but all the monuments in the western part of the church have been removed.

HISTORY: There was a parish church on this site by the C12. In 1323, it was acquired by Hervey de Stanton for use by his new college foundation, which took its name, Michael House (or Michaelhouse), from the church. Even after the church was rebuilt, part of it remained in use as a parish church, but its distinctive plan, with the choir larger than the nave, reflects its collegiate use. In 1546, it passed to the new foundation of Trinity College, created by merging Michael House and King's Hall, continuing in use as a parish church. St Michael's choir stalls are said to have come from the Trinity College chapel, but if so, they must have been brought to Trinity as the chapel there was not built until 1555-7. Alternatively, they may have come from the chapel of King's Hall, the other precursor foundation of Trinity College, where the chapel was begun in 1464-5, or they may have been made for St Michael's as part of its function as a college chapel. In 1908, the parish was amalgamated with that of the adjacent St Mary the Great, and St Michael's was used mainly as a parish hall. It was converted to a multi-use space in the 1990s, with the work completed in 2002.

REASONS FOR DESIGNATION
The Church of St Michael, Cambridge, is designated at Grade I for the following principal reasons:
* Outstanding example of a single phase C14 church, securely dated to the late 1320s, restored by noted church architect Gilbert Scott after a fire in 1849.
* Distinctive plan with the chancel larger than the nave, reflecting its intended dual use as a college chapel and a parish church.
* Outstanding C14 fittings, including chancel sedilia and piscina, screen fragment and statue niches in S chapel.
* C15 choir stalls.
* Excellent C19 reredos and painted decoration in the chancel.
* Converted to multi-use space in early C21, but sympathetically and without damage to the legibility of the building.