Church of St Mary the Great 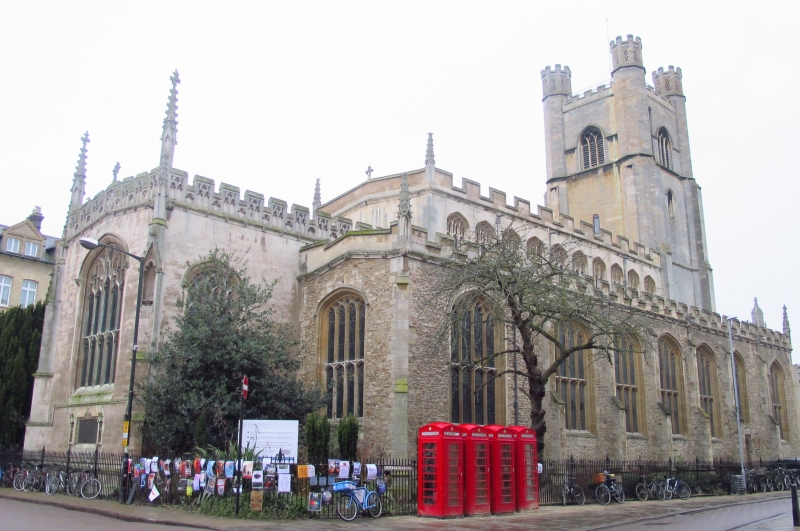 MATERIALS
Rubble with some ashlar, and dressings of oolitic limestone. Interior faced largely in clunch. Some of the stone comes from the ruins of Ramsey and Thorney abbeys. Lead roofs.

PLAN
Chancel, nave, W tower, N and S aisles extending alongside the tower and the western part of the chancel, S porch.

EXTERIOR
A very large and impressive church that forms an important landmark in the centre of Cambridge. The exterior is wholly perpendicular in appearance, and is embattled throughout with low pitched roofs. The windows are late perpendicular in style and have vertical tracery, with transoms in the aisle windows and chancel E window. Tall four stage W tower, with a very large W window and polygonal corner turrets. It is c.1490-1550 to the top of the W window, with the upper part added in 1593-1608. The W door is C19 and replaces a late C16 Elizabethan door. Clerestoried nave, the clerestory windows unusually tall. The aisles extend across the western bay of the chancel to form chapels, and there is a polygonal rood stair turret on the S side at the junction of aisle and chapel. Gabled S porch, added in 1888 to replace a porch demolished in 1783. The chancel was refaced externally in 1857 by Salvin.

INTERIOR
A lofty interior, particularly notable for the rich decoration on the arcades and the survival of the C18 aisle galleries. the chancel E window is C14 internally and there is also evidence for former C14 N and S doors and windows. There is an early C14 tomb recess in the chancel, and C14 two ogee-headed statute niches flanking the E window. The arches to the chancel chapels are late C15. The tall, slender nave arcades, the N and S tower arches and the chancel arch have richly panelled spandrels with blind tracery and a moulded frieze of quatrefoils. The internal string courses in the aisles and chapels are also decorated with paterae, flowers, masks and heraldic devices. The nave roof stands alternately on slender shafts that descend to the piers and corbels between the clerestory windows. The tower arch rises through two stories to the head of the clerestory windows; it is partially closed by the organ gallery. The lower part, with a Perpendicular-style doorway in artificial stone, is probably part of the former W gallery of 1819. The aisle galleries were installed in 1735. Screens closing the entrance to the chancels from the aisles were made up in the C19 from parts of the C18 pulpit.

Very fine late medieval roofs in the nave, aisles and chapels with carved bosses and openwork tracery in the spandrels of the braces; the bosses in the nave are very fine. There is a further C18 roof designed by James Essex above the medieval nave roof. N and S aisle doors are early C16; those in the chapels are late C16, as is that to the rood stair. The N tower screen wall door is C17; that on the S is C15.

PRINCIPAL FIXTURES
Remains of a C14 double piscina and sedilia in the chancel, and two C14 statue niches flanking the E window. Late C15 piscina in the S aisle. Excellent and very unusual font of 1632, polygonal, with strapwork cartouches on the bowl and Renaissance foliage carving on the stem. The cover is also C17. Late medieval chest, much restored in the C19. Some C16 or C17 poppyheads survive on the C17 benches at the back of the galleries. The other gallery seating is C18. Good nave benches of 1863 with finely carved poppyheads, and C19 choir stalls, also with poppyheads. Organ of 1698, rebuilt in 1870, in a fine late C17 case. Very good C19 pulpit of 1872, with openwork tracery; it is mounted on rails in the floor allowing it to slide to the centre of the church when needed. Wooden eagle lectern of 1867. Some late C19 and early C20 glass. E window of 1872 by William Chance. The clerestory windows, installed 1902-4, use portraits of noted Victorian clergymen for the faces of the apostles. Clock face of 1679 on the tower.

Many monuments, mostly wall and floor tablets. Notable monuments include an early C14 tomb recess in the chancel, probably for John of Cambridge, d. 1335, and William Butler, d.1617/8, an alabaster wall tablet with a half-figure flanked by putti. Also many good C18 wall tablets, and a number of palimpsest ledger slabs made from former brass indents. A small brass plaque marks the former burial place of Martin Bucer, d.1551. There is a good set of C18 and early C19 bequest boards under the W tower and in the galleries.

The datum point for road mileage from Cambridge, established in 1732, is cut into the SW tower buttress.

HISTORY
There may have been a church on this site, adjacent to the marketplace, before the Conquest, and it was certainly in existence by the late C12 or early C13, when it was known as St Mary-by-the-market. It was used by scholars of the nascent university from their arrival in 1209. There was a fire in 1290, and the chancel was rebuilt in the early C14 and consecrated in 1351. The rest of the church was entirely rebuilt from the late C15. The work began in 1478, but carried on into the early C16. The nave roof was being framed in 1506, the altar in the Lady chapel was set up in 1518, the nave seats were made in 1519. Craftsmen associated with the work include the masons William Burdon, John Bell and William Rotherham, and the carpenter William Buxton. The W tower was begun in 1491, but by 1550 it had only reached the height of the W window. The bell chamber was complete by 1596, and the top of the tower was finished in 1608. The medieval pulpit was replaced by a new one (now in Orton Waterville church) in 1618. A projected spire was never built. The galleries in the aisles were added in 1735, and a chancel gallery, subsequently removed, was installed in 1754. A three decker pulpit and box pews were also installed in the mid C18. James Essex carried out restorations to the nave roof and altered some of the windows in 1766. A W gallery, also later removed, was installed in 1837 to designs by Edward Blore. Blore also intended to add a spire to the tower, but this was never carried out. The Elizabethan W door of 1576 was replaced by a Gothic-style door in 1850-1 by Gilbert Scott, and the old vestry was demolished and the chancel re-clad in 1857 by Anthony Salvin. The S porch was rebuilt along its original lines in 1888, and the tower was restored in 1892. There was also some refurnishing and restoration in the C20, including reordering in the chancel in 1958.

SOURCES
RCHME City of Cambridge: II (1959) , 275-80
Buildings of England: Cambridgeshire (1970), 219-20
Hall, R. Great St Mary's: The University Church, Cambridge, Guidebook and History (20060
REASONS FOR DESIGNATION
The church of St Mary the Great, Cambridge is designated at Grade I for the following principal reasons: