The Law School and University Offices 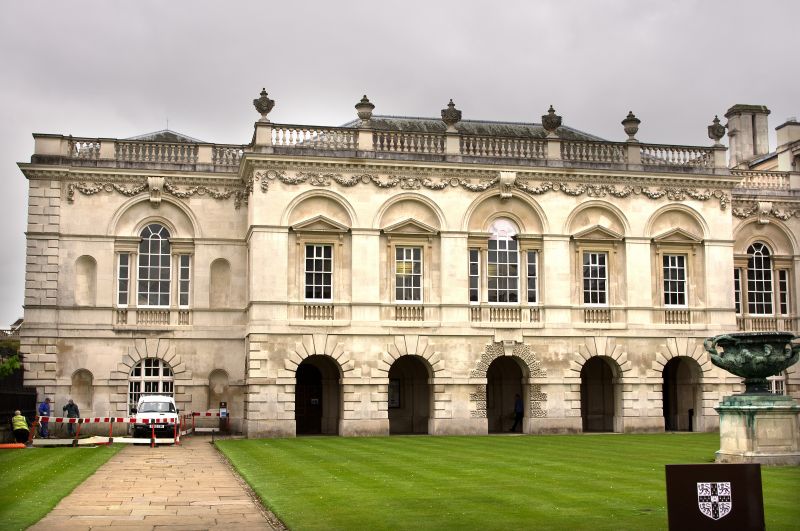 THE OLD SCHOOLS
1.
942
The Law School and
University Offices.
TL 4458 SE 6/307 26.4.50.
I
2.
Cobble Court
East Range 1754-8 by Stephen Wright. 2 storeys faced in Portland stone
ashlar. 7 bays with the central five set forward. The ground floor is
an open loggia with rusticated, round-head arches. The upper floor has
a central Venetian window, the rest are square-headed. The interior has
the original staircase with a scrolled wrought-iron balustrade. The main
upper room (the East room) has a very good decoration, both carved wood
and plaster-work.
North Range late C14. Rubble with freestone dressings. The outer face
of the building is now blocked by the Cockerell building. The interior
has on the first floor the former Regent House, now a combination room.
Of 6 bays, it has a enriched plaster ceiling of circa 1600 on a roof of
circa 1400. It is otherwise much altered.
West Range circa 1435-55. Largely altered in C18. The windows are mostly
of that date, but 2 are C15. The interior contains the Syndicate Room
on the upper floor.
South Range 2 storeys of 1457-circa 1470, the third added in 1864-7. Red
brick with stone dressings on the North front, the South refaced in ashlar
and buttressed in the C19. There are 7 C15 windows on the first floor,
the others are C18 or modern. The interior has the Council Room on the
first floor, this has a roof of 1466, a fine carved ceiling and 2 C18 doorways.
North-West angle building 1718-19, 2 storeys; but with a modern 3rd storey
added. The Dome Room on the first floor has panelling of 1719-20 and a
flat plaster ceiling with some modelling.
West Court. The Old Court of King's College brought by the University
and partly demolished in 1829. Built from 1441-4, but never finished,
the West range was completed and in part rebuilt to designs by G G Scott
in 1864-7 and J L Pearson in 1890. The South range was completed by G
G Scott in 1864-7. The Old Gatehouse has been extensively restored by
Pearson and in modern times. It is of ashlar faced rubble. (RCHM).