A Grade I Listed Building in Isleham, Cambridgeshire 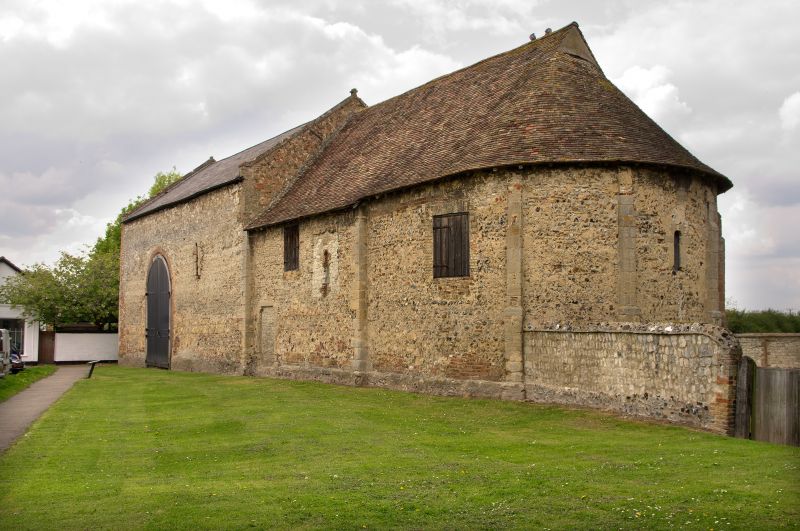 A small Benedictine priory of c.1080-90 built by Count John and
given to the abbey of St. Jacut in Brittany. Later it was used
as a barn and now it is in the care of the Department of the
Environment. Although restoration has taken place, the priory
is substantially intact and remains a rare example of Romanesque
work. The walls are principally of clunch laid in herringbone
pattern with Barnack limestone plinth and dressings to door and
window openings. The roofs have been rebuilt and that of the
nave has been raised. Plan of nave, choir and apsed sanctuary,
originally with a semi-domical roof. The west end has two C16
buttresses of flint with red brick quoins and a single round-
headed lancet window. The barn doors in the north and south
walls of the nave are also probably of the C16. The south
doorway of the choir and most of the window openings are C13
with Caernarvon heads. The apse has original pilaster
buttresses of Barnack. Interior. Round-headed choir arch,
double recessed and unmoulded, on responds each with two
attached half round columns with cushion capitals and splayed
bases. Vacant nook shafts on west side. Sanctuary arch has
been demolished but the rectangular piers have survived with
moulded capitals and bases. At the west end of the nave there
are three bulls eye window openings.
RCHM: Record Card.
Pevsner: Buildings of England, p.416.