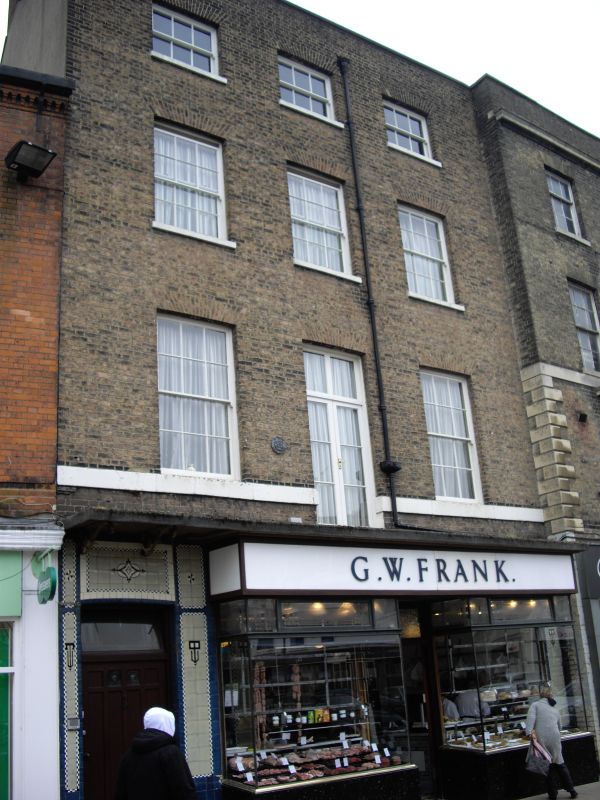 Early C19 shop refitted in the 1930s. The single-storey mid-C20 rear extension and the attached two-storey C19 building that faces onto the lane at the rear of the site are excluded from the listing.

PLAN: the building has a frontage on the south side of the Market Place and is rectangular on plan with a rear wing.

The single-storey mid-C20 rear extension and the attached two-storey C19 building that faces onto the lane at the rear of the site are excluded from the listing.

EXTERIOR: the four-storey, three-bay building facing the Market Place has a stone-coped parapet and a wide band at first-floor sill level. The ground-floor shop front has a plain frieze with wooden edges and two stall risers of black granite which support square, metal-framed bay windows. The recessed double-leaf wooden doors have a single lower panel and a long glazed panel above, brass upright handles and an overlight. The porch floor is laid in pale grey marble with a sunburst motif in black marble. The wooden door on the left hand side has four long panels with wide fillets and four small square panels along the top, the central two glazed with bulls eye glass. It has an overlight and a decorative tiled surround of blue tiles with cream panels edged in a black and white billet pattern.

INTERIOR: the principal area of interest is the very fine Art Deco shop fittings which are complete in every detail including the elaborate geometric black and white tiled floor, pale grey marble-topped counters, and full-height white tiled walls. These have pale blue moulded tile dado rails and skirting; a wide dado band of mottled blue, grey and pink tiles embellished with narrow bands bearing either a fylfot motif or three-leaf and berries; and a flamboyant frieze of stylised foliage and swags. The shop has an egg-and-dart cornice and decorative ceiling in shallow relief. There are original chrome wall hanging bars in the window recesses and on the walls. Behind the principal counter is a double-leaf wooden door with brass hinges and glazed upper panels.

There are few remaining early C19 features on the upper floors with the exception of a hob grate in one of the bedrooms, a reeded door surround to the principal reception room, and the remnants of a French window in a handsome wide door surround with fluted jambs and corner blocks that must have led originally into the garden or conservatory. There are some later fireplaces, including an Art Deco one in the principal reception room which has a geometric tiled inset, and some Edwardian six-panelled doors.

The Fenland town of Wisbech stands on the River Nene and grew in the Middle Ages as an inland port and market town. In the C17 the inhabitants resisted the draining of the Fens but this resulted in the town becoming a prosperous port. On either side of the river at the west end of the town are the North and South Brink, two well-preserved Georgian streets of merchants’ houses and warehouses, including the notable Peckover House which is now owned by the National Trust. The town has two market places and a sophisticated planned development called The Crescent which was built on the site of the castle in the late C18. Trade continued to flourish, especially after the Nene outfall to the Wash was improved with a new channel in 1827-30, and shipbuilding brought further wealth to the town.

10 Market Place was built in the early C19, presumably as a shop with living accommodation above. At some point it was occupied by a chemist before being taken over in 1908 by the pork butcher George William Frank whose descendents continued to run the family business until 2015. In 1932 the shop was refitted in Art Deco style by George Barlow and Sons of Sheffield. The Ordnance Survey maps of 1902 and 1927 show three adjoining buildings occupying the long, narrow plot that runs between the Market Place and the lane at the rear of the site. It is thought that a conservatory was built to the rear of the building that faces the Market Place but this was replaced by a bakehouse, probably in the 1960s. The C19 building to the rear of the site has also been converted into a kitchen. In the 1990s the window on the left hand side of the shop front was smashed by a car and a replica was made to replace it.

10 Market Place, an early-C19 shop refitted in the 1930s, is listed at Grade II for the following principal reasons:
* Architectural interest: the Art Deco shop fittings are characteristic of the new inter-war style which was an important means of introducing the Modern Movement into the country;
* Interior: the graceful tile patterns and pale marble veneers achieve an overall fluidity of decorative effect that exhibits skilful design and craftsmanship;
* Degree of survival: the fittings survive with a remarkably high degree of intactness, thereby representing a well-preserved Art Deco interior of considerable quality;
* Historic interest: A stylistically restrained, well proportioned townhouse and commercial premises of the early C19.
* Group value: it has group value with numerous listed buildings on the Market Place, particularly Nos.8 and 9 to the east and Nos.11,12 and 13 to the west which are all early C19 shops.