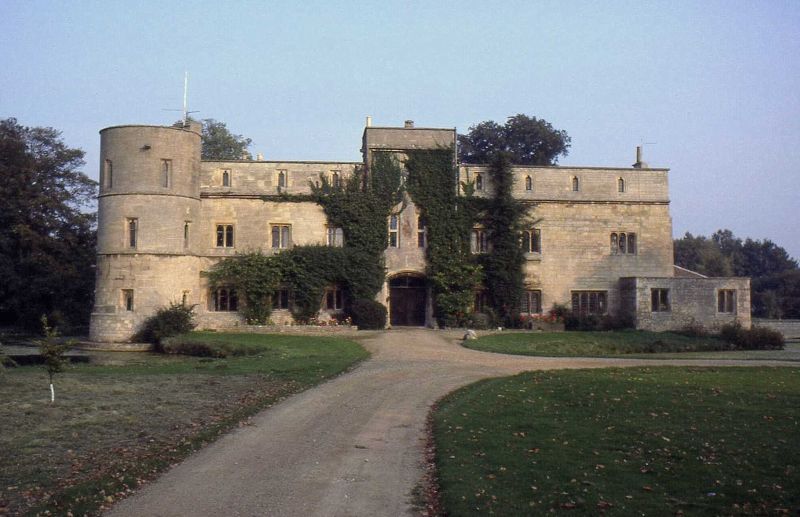 1.
5141 ETTON WOODCROFT ROAD
Woodcroft Castle
TF 10 SW 10/220 15.12.55
II* GV
2.
Inhabited fragment of late C13 castle on a moated site, and with additions and
alterations. What remains is the west side of the original building with a
central gateway and a circular tower at the north end. There was probably
a courtyard at the centre and the 3 other sides and the associated corner towers
are no longer standing. Ashlar. West front has central 3-storey gateway with
wide double-chamfered segmental arched entrance, and flanking 2½ storey 3-bay
wings. On the north end is a 3-storey circular corner tower rising from the
moat. The tower, gateway and attic storeys have single-light windows with shouldered
heads set in chamfered recesses. The rest of the windows are mainly 2-, 3-
or 4-light stone mullion windows with straight heads and arched lights. Moulded
string courses at floor levels. L-shaped on plan with short early Tudor wing
to north-east.
Interior: has large medieval fireplace. The Rev Dr Michael Hudson, Chaplain
to Charles I took part in the defence of the castle against Parliamentary troops
in 1649. The incident is illustrated in Bridge's History of Northamptonshire
Vol IV plate LXXX page 508. VCH Northants Vol II page 488. NMR.